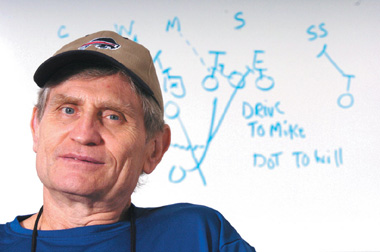 Editor’s Note:  Jim McNally has been alluded to as the “grandfather of offensive line play” during his 41-year tenure as an OL coach.  Continually known for being on the cutting edge of blocking techniques and fundamentals, currently McNally serves as an offensive line consultant for the Cleveland Browns, after having the same position with the New York Jets.  Much of McNally’s resources- including information on his yearly clinic- could be found at coachmcnally.com Mike Kuchar, X&O Labs Senior Research Manager, spent some time talking with McNally this off-season on the newest trends in offensive line play.    Coach McNally and the drill film included in this interview come to us courtesy of SOTL/FBU.  Check out more from them at:  http://www.sotl.com .

MK:  Coach, you always preach that Offensive Line play always starts with the stance.  How have you found lineman to be more effective based on their stance?

JM:  You should get into a stance in which you can get the job done, as it refers to the stagger in the feet.  The Right Tackle in a right handed stance and has to go to his inside and his right stagger is too deep for whatever reason.  I think you need to get more parallel or get in a right handed stance and drop your left foot back because you can’t get to where you have to get to because a coach mandates that you have to have a stance that is a certain way.  Who cares who sees what you’re doing if you have to shift your inside leg a little bit?  I feel that too many coaches worry about giving things away.  Who cares?  They don’t know which scheme you’re running.  In the NFL the guys have so many assignments and responsibilities that I’m not so sure if they can tell if a guy is going left or right.  Whether it could be a reverse, counter, etc.  If it’s third and long and you’re a right tackle, stay up and put your right foot back as deep as you can.  I do know that it’s easier from the left side to put your left hand down and your left foot back in pass pro because it’s easier to get the kick slide on pass protection.  On the left side it’s tough to pass block someone who is wider so the left hand and foot is back.  You don’t want to cross over your body with your right hand. There isn’t many colleges or pro guys right now that are not left handed on the left side.  I think you can play the whole game in a two-point stance.  When you’re in a two-point stance you take that first step you can lower your center of gravity.  Except on third and one or on the goal line- I wouldn’t use the two point in that situation.  The reason I like it is because you can vary your splits pre-snap when a defense shifts.  As soon as you lock yourself down with your hand you can’t make any adjustments.

MK:  How can offensive lineman gain an advantage by using their splits?

JM:  Unless the defensive team does a lot of stemming, I’m not sure that you should vary your splits.  If two guys have to work together I don’t care if they get foot to foot.  So much of offenses now are double teams and combo blocks.  Well, get foot to foot so that you can execute the block.  The guard sets the integrity of the split.  The defense may know something is up, but they don’t necessarily know that you’re on the backside of a zone play or the front side of a double team play.  If my backside guard is pulling on the power play I don’t care where he lines up.  Just get off the ball.  You may have a bootleg, reverse or naked where that guard pulls.  Do what you have to do to get the job done.  Conversely, if the backside is off the line of scrimmage, the front side should be on.  They need to be able to maneuver their blocks or the pulling guard may not be able to see his assignment if the front side gets knocked off the ball.  The pulling guard has more time and space to see his assignment. 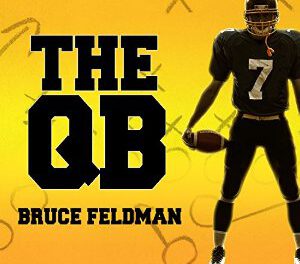 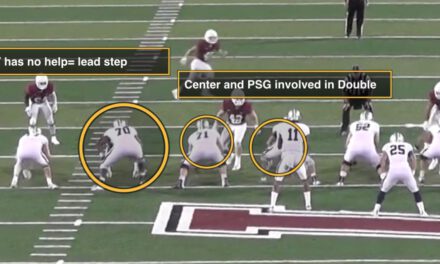