Michigan State’s Tags to Man Block Its Outside Zone Scheme 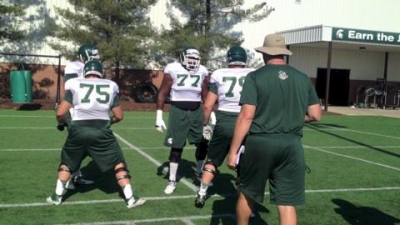 According to Michigan State’s offensive line coach Mark Staten, the beauty of tagging the stretch concept is it negates penetration by turning a zone blocking concept into a man-blocking scheme. The Spartans are averaging 246 yards per game on the ground in 2014 and its Pin and Pull concept is a big reason why. Staten sat down with us to tell us about three tags he will use to get down blocks and angles at the point of attack.

Simply put, Michigan State majors in the outside zone scheme, but minors in the pin and pull scheme. The Spartans offensive line coach Mark Staten contributed to X&O Labs’ study on the stretch or outside zone scheme (which can be found by clicking here) and he frequents offensive line clinics around the country lecturing on the nuances of the scheme. After all, the Spartans averaged over five yards per play on the outside zone in 2013. But what Staten doesn’t talk much about, until now, is what he does to counter defenses who start to flow with the rhythm of the outside zone concept and the answer lies in splitting the defense with a pin and pull concept.

Much of what Coach Staten teaches on the pin and pull concept is tied into the outside zone, so it’s imperative to start there. Michigan State classifies its zone concept into the following four derivatives: two-back zone, one-back zone, tight side zone and split side zone. The base rules for his offensive line in the zone play can be found below:

But as defenses start to flow, Staten will find ways to split them. “We do it for a few reasons,” Staten told us. “It stops the flow of the defense and it allows the TE (or PST in Stretch Weak) to attempt normal stretch reach and not tight reach as it would in the stretch play.” Staten will use the following tags in his Pin and Pull concept: Tag, Cage, Tex and Badger. These adjustments are described in more detail below: