Please Note: We've included a lot of video in this case report, it may take a few minutes for all the video to load on your computer.  Thank you.

Editor’s Note:  A” covered” offensive lineman refers to any lineman to the play side of the middle or wide zone concept that is covered up by a first level defender (Diagram 1). 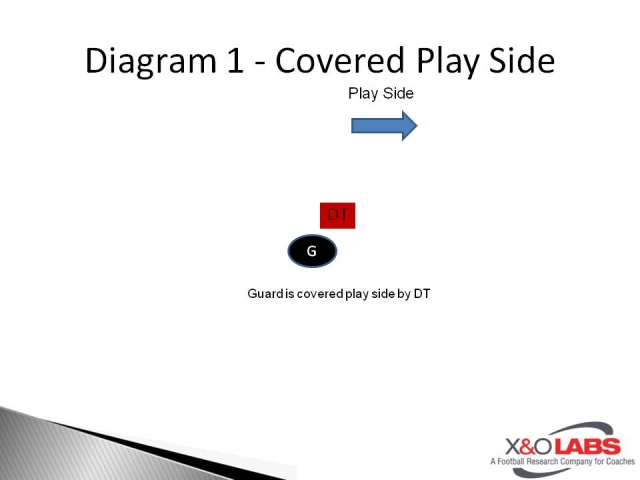 This case presents data on the different techniques that offensive line coaches are teaching to their covered offensive lineman in stretch concepts.   We’ve found that these techniques will differ based on the leverage of the down defender.  There are so many intricacies that go into these coaching points- head placement, hand placement, foot placement, angle of departure, etc. They are all covered in this case as it pertains to the wide and middle zone run concepts.

Our initial research shows that 59 percent teach the far armpit as the visual aiming point for the covered offensive lineman in both the wide and middle zone concepts.   We’ve found our research split on the footwork that coaches teach their covered offensive lineman in wide zone schemes- an even amount teach both the reach footwork and rip to run footwork while 13.3 percent teach the bucket step.  We’ve found that coaches are from two schools of thoughts on the covered lineman- they are either reach step advocates or bucket step advocates and we present both perspectives below. 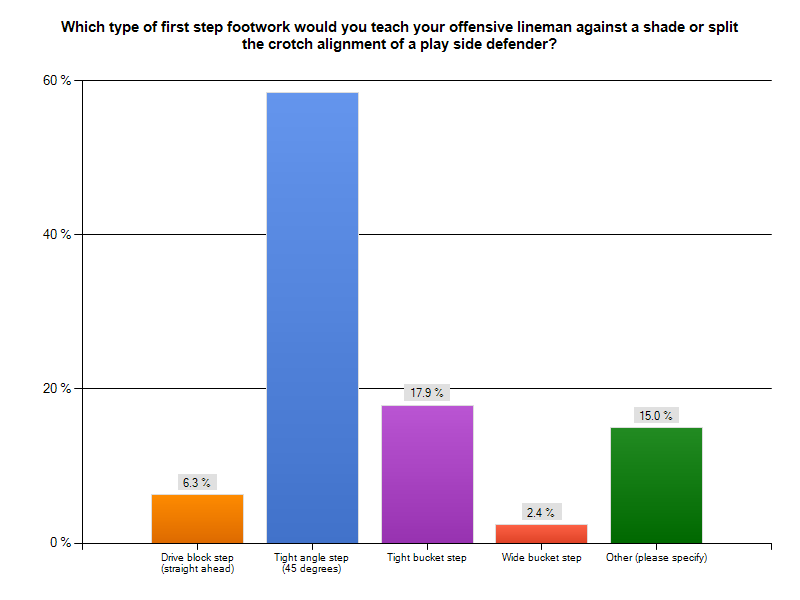 36.7 percent of coaches teach the rip to run technique in wide zone run concepts, regardless of position of the defense, so it’s important to present that side of our research.  Rick Trickett, the offensive line coach at Florida State University, is one of those coaches.  For Trickett, the crux of the scheme is the first step of the covered offensive lineman.  “He must bring his shoulders through on the first step on the stretch scheme,” Trickett told an audience of 400 coaches at the C.O.O.L. clinic in Cincinnati last month.  “We work to get our outside breast to his far armpit and our inside foot to crotch.  To do this we bring our shoulder over our knee on the first step.”

Eddy Morrissey, a former Graduate Assistant under Chip Kelly at Oregon teaches the tracks methodology and uses a run to reach footwork for everyone along the front.  “Technically I’m covered, but it’s really ripping and pressing and covering him up,” Morrissey told us.  “We don't want the uncovered player to knock into me and there is all this penetration.  As I feel pressure, I need to lean back into him. I want my guys to face the sideline and now we are on a track.”   He teaches an elbow whip, pivot and run technique to his offensive linemen in his wide zone concept.  He provides a video tutorial on this technique below.