Inside Zone for Maximum Efficiency 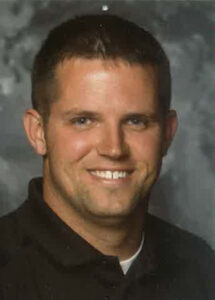 Editor’s Note:  Brent Morrison is currently the offensive coordinator and QB's coach at Westerville Central High school in the Columbus, Ohio area.  He has been coaching at WCHS for 8 seasons and coached multiple positions.  He has a total of 12 years high school coaching experience.

When our current Head Coach, John Magistro, took over our program four years ago he was determined that we would be a zone running team.  This was a major transition for the kids and many of the coaches that were used to primarily gap blocking schemes.  So our difficult journey began and we have evolved to a point where the Inside and Outside Zone are nearly 75% of our run game.

This was not an easy place to get to.  We had all read the articles, gone to clinics and talked with other coaches that were knowledgeable about zone offense, and at first we felt like this was exactly the right thing for our program.  Through camp, two-a-days and scrimmages we were looking great, but then we had some downfalls.  Our zone became very inefficient, our QB was making poor decisions and our RB’s were making the wrong reads while carrying the ball.  Basically, everything that we had worked towards was imploding.  We as a staff sat down one Sunday night and had a real heart to heart about whether or not we should scrap the zone.  After about an hour discussion we decided that it was something that we would continue to work on and build our offensive run game philosophy around.

I tell this story not to scare anyone from running the zone, but to give you a reality check that it is not a magical play that will come in and solve all of your offensive issues.  We have devoted a lot of time and effort into creating the package that I am about to share.  We are constantly evolving and growing so that we can become more sound and efficient as an offense.  Some of the things we have actually added this offseason.  In fact we always struggled with how to set our fullback while we were in the pistol.  Thanks to Coach Schmitt from Atholton High School and his article "Pistol Two Back Zone Run Game" for giving us some tags that we felt solved many of our issues.  You may notice some overlap from our articles, but I have found that overlap and redundancy is a common them when reading articles about the Inside Zone.

The last point I want to speak to before we get into the x’s and o’s is about the use of a no-huddle offense.  We are exclusively a no-huddle team and have been for four years, but only in the last two have we been an up-tempo no-huddle team.  I truly believe this has been the key to our IZ being effective.  Inside Zone is all about taking advantages of defensive decision making and a very fast no huddle team focuses on confusing the defense and blurring their decision making.  Combining the IZ with no-huddle is the best way to create maximum efficiency.  Our tagging system has evolved and is continuing to, but hopefully our work can be of some value to you.  Also, I am not using our real tags, since we try to protect our no-huddle language as much as possible, but I am sure your staff can come up with your own creative terms/signals for these schemes if you chose to employ them.

Inside Zone read vs. Veer Read 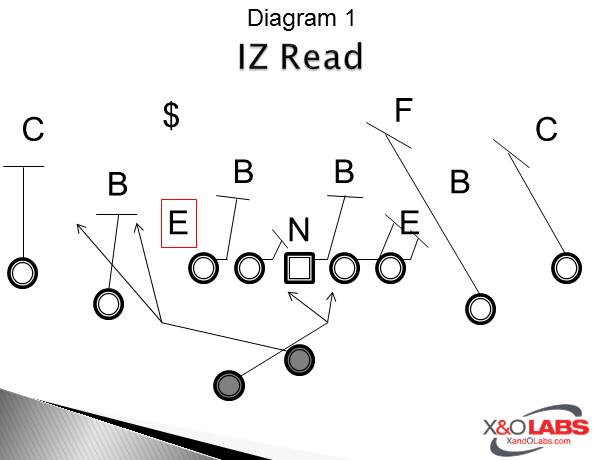 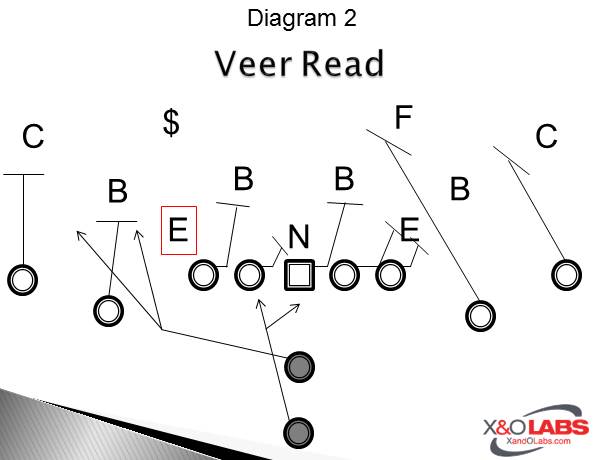 We run inside zone with our line in both our inside zone and our Veer series.  Our Offensive Line has no idea what the difference is, because for them there isn’t.  If we run IZ or Veer the difference is where the back will attack first.  If we call Inside zone right read as pictured above, then the RB is attacking the zone side B gap.  If it filled then he works his way back across the zone to play side A, and finally backside to the backside A gap.  If we are running veer left read then it looks exactly like IZ right read, except QB and the RB change.  The QB's technique we teach is funnel the RB to the right hole.  We went away from exact steps because when working from the gun, the snap often time will create different starting points for the QB.  The RB is then told to run the toes of the QB.  In the IZ series the RB starts on the opposite side and gets funneled to the B gap away from him.  If we are using the veer series, then the QB will funnel the RB to the A gap on the same side.   The QB’s read is not much faster and the RB will read veer side A to backside A.  The Veer series is primarily used from our Pistol backfield, but can also be used in a traditional gun set.  All of the veer plays will be drawn from the Pistol set throughout this presentation.