Over the past 4 years, our primary run play at Catholic High has been Power. On average, we have run the play 100+ times per season and averaged 7.4 yards per carry. However, in the 2017 season, our yards per carry on the play reduced. After studying our season, we realized that we significantly struggled running Power to odd fronts, specifically those that aligned their defensive ends in 4’s or 4i’s, and we needed an answer – we certainly weren’t going to stop running Power against these looks. After much trial and error, our outcome was an unconventional double team involving the H/sniffer or fullback and the play-side tackle; we refer to this technique as the FAT (fullback and tackle) technique. Notably, we removed the need to win a 1-on-1 battle at the point of attack. This minor adjustment was possibly our most influential and innovative tweak to our run game this year.

Editor’s Note: This report solely focuses on the development of our Fullback/Tackle double team. For more information on how we teach power against odd front, including our center-guard double team, you can find the following article written by our head coach, Gabe Fertitta on X&O Labs: Cardinal Double Team Technique in Gap Schemes

Our first attempt to solve this issue of running A-Gap Power against odd front involved switching the responsibilities of our fullback and play side tackle. Instead of the tackle blocking the 4 or 4i and the fullback kicking the edge defender, the tackle would work out to the edge defender and the fullback would kick the 4 or 4i. We felt that we could potentially widen the 4/4i with the tackle’s movement allowing the fullback to kick the 4/4i with inside leverage. While this technique works well against teams that play the tackle’s shoulder with the 4i or play a static front, we found that this technique was not resilient against front movement or 4i’s that simply play the B-Gap. 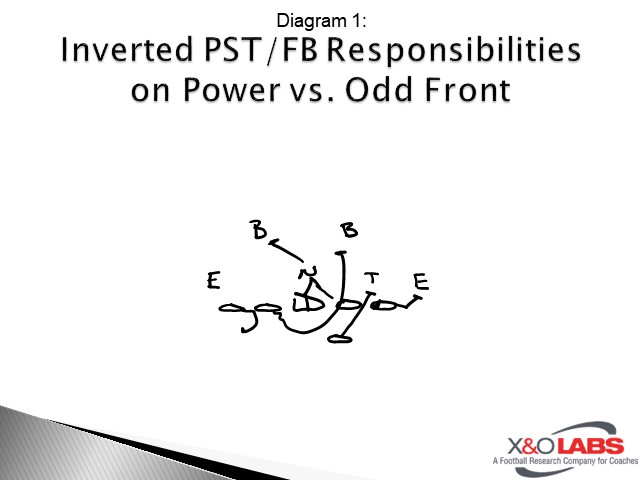 Clip 1: Notice how the exchange of responsibility between the fullback and RT allow for inside leverage on both blocks. This change allows us to maintain the A-gap and run our ideal track for power.