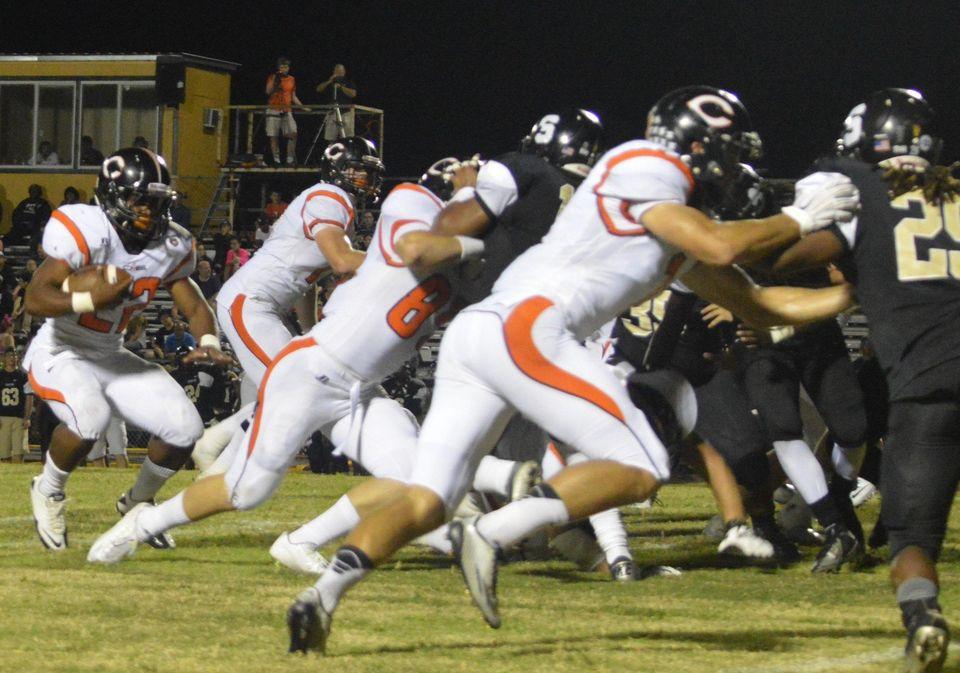 One of the staples of our offense for 3 years at Catholic High has been the power play. In three seasons, we have averaged calling some version of power over 150 times per season and have averaged 7+ yards per carry. One of the most influential changes we instituted to the fundamentals of our blocking came from our study of Stanford University’s techniques on the front side double team, or what we now call our “Cardinal Technique.”

Coaching The Tackle/Guard Combination on a 3 Technique

In the past, we have taught traditional footwork for the power double team. The inside (or post man) would take a settle step with his inside foot and work his second step through the crotch of the 3 technique and use “half bench” hand technique. For the most part, this part of the concept hasn’t changed. Our tackles used angle footwork with their backside (non-play side) foot and attempted to “dent” the defense vertically. He used “full bench” hand technique. We taught both the guard and tackle to work the 3 technique as vertical as they could to create a dent in the defense to run power.  Our running back aiming point was and continues to be “A-Gap to Bounce.” We do not allow our running backs to cut back on power unless they score. Stanford’s coaching point on this is “we only cut back for a $20 bill and not a $1 bill.”

This technique worked well for us and Power was a staple run for us even before we changed techniques.  That said, the wisdom we gained from hearing Coach Bloomgren discuss the technique they use at Stanford illuminated a fatal flaw in how were blocking the front side double team on power. We were asking our guard to work toward a 3 technique in one direction and our tackle to work toward a 3 technique in another. Simple physics tells us that resulting vector from those two forces will not be as strong as if both forces were moving in the same direction. Fixing the angles would allow for more movement at the point of attack.

Our “post man” in the double team will still use his “settle – lift” footwork. This is what Stanford calls jab and crotch. However, instead of trying to force the 3 technique vertically, the guard will attempt to “torque” the 3 tech down the line of scrimmage when he feels the “bump” from the tackle.

The tackle uses what we refer to as “high leg shuffle” footwork. This technique assumes that the tackles are in right and left hand stances on the right and left side of the line, his dominant foot will be his inside or post foot. We work a high leg shuffle or gallop technique in which the tackle will attempt to knock the 3 technique over and on to the guard. His first step should still be with his “backside” or inside foot. We look to make contact on the third step of this footwork (although it doesn’t always happen just like that)  We target the hip of the defender and use “half power technique” which resembles old school shoulder blocking.

When the guard feels the tackle bump the down lineman, he then torques the defender using the force from the tackle and works the DL down the line of scrimmage. If there is not enough initial “bump” to completely torque the DT, the two then work hip to hip on the double team similarly to the way we would teach the power or gap double team before.

Aside from the usual coaching points, there are some things that must be emphasized when using this technique. The tackle’s pad level must remain low so that he can target the hip of the DL with the top of his shoulder pad. Although this is what we teach, many times this doesn’t happen. The OT will usually end up being a little too high, but if we teach them to target the hip and the miss a little high we can still win on the double team.

The guard and tackle must also be extremely aware of LB run through in the A gap. If this happens, the guard must come off of the 3 and block down to protect his gap. The tackle then must respond by working from half power to full bench hand technique.

One of the benefits of teaching this technique is that it helps the tackle to stay square for the LB when he gets to the second level. Many times in our old power technique, the OT would be turned at a 45 degree angle and would not be able to redirect if he had to come off for the backside LB running over the top of the double team. The cardinal technique allows us to stay squarer longer and makes catching the LB running over the top of the double team a lot easier. By staying square, the tackle also has a much easier time picking up movement from the 3 technique if he were to move from a 3 to a 4 or 5 technique.

We also like to teach the OT (or driver of the block) to not come off the double team early for the LB. Stanford refers to this as “U-Out.” When the LB works hard over the top of the double team, the tackle can simply work a U path to widen the LB past the A-Gap. As long as your RB is patient and presses the A gap, this technique will be extremely beneficial. This technique can also be used between a TE and tackle as well against under defense. The tackle becomes the post man and the TE becomes the driver.  The technique also allows smaller TE’s or offensive linemen to deliver far more force into the down block than previous techniques. This particular technique makes an already physical play much more physical.