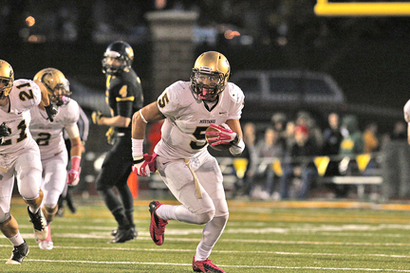 Editor’s Note: The following research was conducted in part of XandOLabs.com special report “The Run/Pass Option” study, which can be accessed by clicking here.

Instead of using the play side inside linebacker as a movement key in the hitch concept, Head Coach Cory Sauter chooses to put the perimeter outside linebacker in run/pass conflict. The run action is quarterback isolation, while reading the apexed player. Sauter will use hitches, outs or bubbles by the number two receiver to get the apexed player to widen. The quarterback will read number two play side. “If number two doesn’t blitz, we throw the easy hitch if he reacts off the QB draw,” said Sauter. “If he blitzes, we simply throw one of the hitches or we may convert to a fade if we see press.”