A bit of clarification is needed before we provide our research. We feel it necessary to provide an explanation of exactly what a run/pass options is. Like many other concepts in football, this has different meanings to different coaches. Some of these terms include run/pass combinations, dual read play calls and run/pass marriages.

This entire special report will be centered around run concepts that involve a pass element where the quarterback must make a post-snap read of a defender and decide whether he is handing the ball off or throwing the football.  Which means that a quarterback is reading a certain defender post-snap (known as a read key) to decide whether the ball is thrown or handed off.

This special report, The Run/Pass Option Concept Study, could perhaps be the impetus behind some ideas that may drive your offense to become more dynamic. The fact is, we all have run concepts in our offense and we have pass concepts in our offense. A short time ago, a group of smart football coaches decided to package their best runs with their best passes, thus taking the guesswork out of their hands and into their quarterbacks.

Now, that isn’t always a popular choice. We’ve interviewed a good deal of coaches like Charleston South High School (SC) head coach Donnie Mays who said, “If I want to run it, I’ll run it. I don’t want my quarterback making that decision.”

It’s important to note that Coach Mays has contributed to this report, because he does believe in the RPO system. But those coaches who have bought in completely to using run/pass options are a relative new crop. We’ve found that the majority of coaches, 43.3 percent, have been using run/pass options between the last 2-3 seasons. 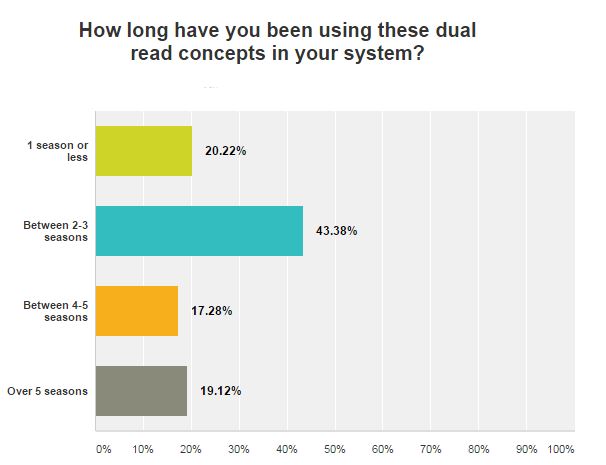 Benefits of the RPO System:

If taught correctly, a run/pass option necessitates you never getting into a bad play.  At its core, if the quarterback makes the right decision (based off his movement key) it’s a positive play. But we all know our quarterbacks don’t always make the right decision, which is why we dedicated a heavy portion of this research to how coaches are training their signal callers to make the right read. There is a lot of teach time that goes into establishing these run/pass option concepts and many of our contributing coaches detail what they do to progress the system further in this report. We selected several contributing coaches and asked them what they felt the benefits of using the RPO system provided.  Here’s what they told us:

Steve Rampy, Offensive Coordinator, Pittsburg State University (RPOs consist of 25 percent of his offense): “Not every run has a pass complement, but many of our runs have an ability to (have a pass off of them). We have some concepts where if we have a run called and we see an extra defender in the box, we will check the play. We have other concepts where if we see the same scenario, we’ll read him post-snap. You don’t want to get in a bad situation if that player comes into the box early, now you’re stuck. The quarterback makes the communication with the receiver to get it worked out. “

Brian Flinn, Wide Receiver Coach, Villanova University (RPOs consist of 30 percent of his offense): “We just try to get apexed players in a bind, either they play run or they play pass. Every run game is based off a smoke, bubble or free access throw for us. There is no three-step drop unless there is a two-minute drill. If you want to move defenders, have receivers run block.  We zone block and run two-yard hitches. It’s pass for the receiver and run for the offensive line. It’s the QB that has to think and make decisions. You eliminate a lot of things in your offense by doing this. You eliminate three-step protection and most of your play action menu.”

Drew Owens, Offensive Coordinator, Western Connecticut State University (RPOs consist of 50 percent of his offense): “We are a no-huddle team that wants to keep a premium on play call. We never want to read a guy that is influencing the run, and if he plays run, have to throw and read another guy. We put guys that are aiding in the run and forcing them to play the pass. He’s our run control guy. The quarterback has the built-in option to throw the ball allowing him to take less hits. It puts an extreme amount of pressure on a defense to prepare for the option and pass in a single play. There are two plays in one. Regardless of what the defense is in, you have the right play called taking out the need to audible. It also accounts for the sixth defender in the box in a 10 personnel formation (seventh defender if TE attached) and it forces teams to play one-high in normal situations.”