Editor’s Note: The following research was conducted as part of XandOLabs.com special report on “Zone and Gap Runs from Unbalanced Formations,” which can be accessed in its entirety by clicking here. 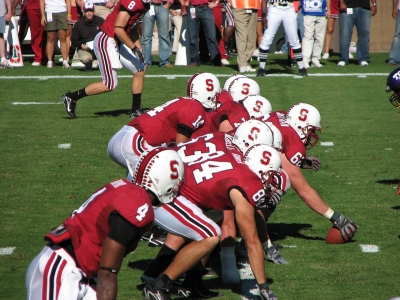 We’ve found that teams that run gap schemes out of unbalanced sets do so because of two main reasons:

Stanford University is one of the teams that believe in creating an extra gap by bringing another offensive lineman into the gap. Stanford calls this personnel grouping "Balco" (named after the San Francisco area laboratory implicated in the MLB steroids scandal), which is used to bring a little more "juice" into its offensive system. Stanford will line up in a four-man surface in an "I" formation backfield and run its power scheme strong and weak. X&O Labs had the privilege of vising with the Cardinal’s former offensive line coach Mike Bloomgren who expounded on his double team progression when running its power scheme.