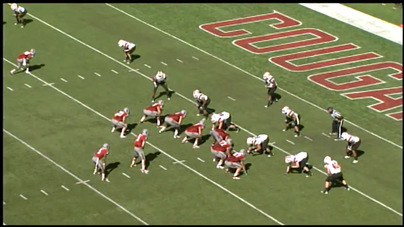 With the advent of the "Wildcat" offensive package several years ago, we started to find that more teams are beginning to use unbalanced formations at the point of attack to run the football.  While we realize that this is nothing new to football- the "lonesome polecat" utilized over 50 years ago can attest to that- we did find that more coaches are finding innovative ways to get more players to the point of attack pre-snap and create advantages in the run and pass game.

The fact is 35.6 percent of coaches use unbalanced formations between 6-10 snaps a game, 33.7 percent use them five snaps or less.  So when we developed our survey on unbalanced formations, we wanted to find out why coaches will use these formations and what they use them for.   So we asked them.  The results are below:  Some of their reasoning is below

The common thought was that only unconventional offenses like the Wing T or option style systems employed "end over" or unbalanced formations, but the truth is various offensive systems are finding ways to create unique formations that give them an advantage at the point of attack.  Perhaps it was the success that Boise State and Stanford University had (both of which we’ll detail later on) that triggered more coaches to utilize some of the same sets.  While we are hesitant to label offenses into "systems" we were curious to find out which types of offensive structures will use unbalanced sets.  Now, we realize this could be a measure of which kind of coaches are involved in our surveys, but in either case, our findings are below: