Editor’s Note: The following research was conducted in part of a larger special report on the Pistol option game, which can be accessed by clicking here. 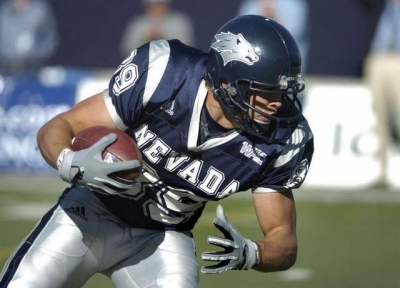 One of the more common defensive adjustments to zone read teams is known as a gap exchange, the most common being a first level and second level defender. According to Cameron Norcross, the former offensive line coach at the University of Nevada, these were the most common counters defenses would have against zone read concepts. Many defenses would tighten the alignment of their defensive ends to allow them to squeeze down blocks while second level linebackers can scrape over the top to play the QB (Diagram 16). Norcross recounts a time that Nevada encountered this exact problem when playing Boston College in a bowl game a couple years back. “We could never get our tackle down to block the play side inside linebacker,” said Norcross. “So we told the tackle to block him so our slip guy could block the play side inside linebacker (Diagram 17). The alley player would be free. So we ran our arc scheme to the tight end side so we didn’t need to run the ball at the tackle. We basically man schemed the back side (read side) of the play. Our tackle was responsible for him so we can take our tight end/wing back on the alley player.