The Origins of the Pistol Formation

Jim Mastro remembers the day like yesterday.  The former Nevada running back coach- now handing the same responsibilities at Washington State University- recalls the time that former Nevada head coach Chris Ault bursts into the football offices with a pre-conceived idea that at that time might have been seen as football blasphemy.   In 2005, the Wolfpack were having a hard time with their QB getting the proper depth on his pass drop from pro typical shotgun formations.  “When he was supposed to be at seven yards, he was at six,” said Mastro.  “When he was supposed to be at nine yards he was at seven.  The conversation started with ‘how are we going to get the QB away from the Center easier and faster?’

“Finally Coach Ault came in one morning and said ‘let’s go downstairs and let’s talk about this.’  He didn’t like the shotgun.  For the few years that he was out of football  (as an Athletic Director at Reno) the shotgun became trendy.  When he came back to coach again, we had all (his staff) coached in the shotgun but he didn’t like it because your run game is East and West.  He liked the idea of the shotgun, but we wanted the downhill run game.  We decided to move the QB up and put the back right behind him.”

Thus, the birth of the Pistol formation.  What started as a shot-in-the-dark notion now has become all the rage in the high school, collegiate and even professional ranks- thanks to the success that Colin Kaepernick, the former Wolfpack QB- has basked in San Francisco.  It’s no surprise considering 49ers offensive coordinator Greg Roman logged a good deal of time in Reno studying the formation while he was an assistant at Stanford University.  “Some of the things we talked about they are doing,” said Cameron Norcross, a former Nevada offensive line coach now at the same position at Fresno State University.  “ When they are bringing backs and tight ends across the formation to block alley players- that is what we made our money on at Nevada for years.  We always tried to gain blockers on the opposite side.  I see it from the Redskins and 49ers.  I guess imitation is the highest form of flattery.”

But according to that Nevada staff, the now sought-after zone read element of the offense wasn’t part of the original plan.   Nevada was already successful running its gap schemes and it’s downhill inside zone schemes from the Pistol.  The zone read game wasn’t necessary.  According to Mastro, it transformed into the zone read when Colin Kaepernick came to town.  “He (Colin) was a freshman and Nick Graziano was our starting QB. They were both freshman.  Graziano could throw the heck out of the ball.  We were playing Fresno State and Nick Graziano gets hurt in the second quarter of the game by breaking his ankle.  In comes Colin as a redshirt freshman.  In one half of football, he threw for about 400 yards and ran for another 80.  The next week was going to be his official start and we’re going up to play Boise State on a Friday night on ESPN.  That’s the game that ends 69-67 in a triple overtime game.  Colin winds up throwing for 250 yards and runs for 170 more.  Therein lies the beginning of zone read football from the Pistol formaion.  What we saw we had in him, that’s how it began.  Then after making every mistake you can within a year or two we finally came up with a pretty good finished project in 2008, 2009, 2010.”

None of which was a surprise to those native Nevada coaches who were there during its conception.  They knew they had something special and they believed in what they were doing, even if no one else did. “The one commitment we made is that we were going all 15 days that spring in 2005 by running the scheme,” said Chris Klenakis, the offensive coordinator under Ault.  “ We would not scrap it come Day 8 and then dump it. We went all 15 practices and made a commitment.   At the end of those 15 sessions, we figured we got something here.”

Oh, they got something all right.  Perhaps the newest innovation in offensive football.  So, it took eight seasons to completely come to fruition.  But its here now and by the looks of our research, it’s not going away anytime soon.  Our HUDL account was inundated with dozens of coaches- many of whom at the top levels of football- willing to contribute some of their concepts from the Pistol.  It’s our pleasure to present our gatherings in what we feel is the largest collection of data on the Pistol from the originators- five of whom were on Ault’s original staff- to the many who have tweaked Ault’s original blueprint to fit their needs. Enjoy the contents below.  It was a long time coming for us.

We’re certain that are still many coaches that want to find the evidence behind this.  Many who are still a little cautious about dipping their feet into the “Pistol” waters and using this scheme full time.  It’s a realistic thought, considering what we assumed would a major time commitment to implement this scheme.  Although years ago the decision made by Ault and his staff were to commit to it full time, we’ve found that there are many coaches who just use parts of it in their offensive system.  When we asked this question, we’ve found coaches split down the middle.  26.7 percent of coaches said they are in the Pistol less than 25 percent of downs while 26.0 percent are in the Pistol between 75-99 percent of downs. 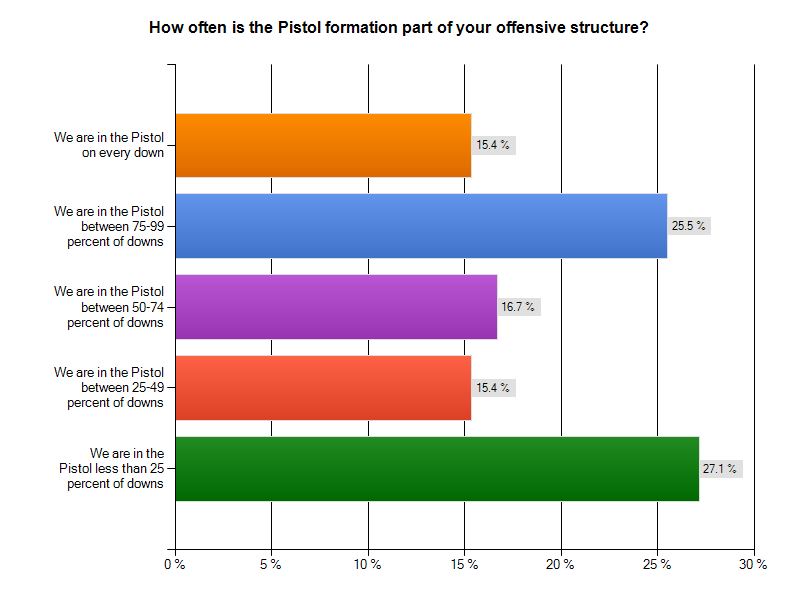