Is 11 Personnel the Ideal Pistol Grouping?

When conducting our research on the Pistol formation, we’ve found that over 30 percent of coaches choose to use a attached tight end when implementing the Pistol. While many believe the Pistol is most commonly synonymous with doubles and trips sets,  the truth is that the Tight End is the most influential tool in the offense.  The benefits are various and are explained in detail below.

Editor’s Note:  The following research is part of XandOLabs.com special report on the Pistol formation which can be found by clicking here.

The Case for an Attached Tight End

As long as your personnel gives you the ability to do this, using an attached Tight End could cause a multitude of problems of the defense which includes:  creating an extra gap in the run game, getting another talented threat downfield in the pass game, stretches out a defensive front and makes the defense declare their strength, being predictable in doing so.  We’ve found the most common personnel grouping in the Pistol formation to be 11 personnel, which over 30 percent of coaches choose to use.  One of these coaches is Paul Brown, the offensive coordinator at Blue Valley High School (KS) who will be in one-back Pistol formations more than 90 percent of the time.  One of the reasons Brown does is to make defenses declare their strength.  It almost becomes a guessing game for him as a coordinator.  Often times he will put his Tight End into the boundary- just so defenses can set their front there- than run his zone option game into the field (Diagram 9).  If a defense decides to rob to the field side, he’s got numbers in the zone read game back into the boundary (Diagram 10).  We will detail Coach Brown’s option scheme more in Case Three. 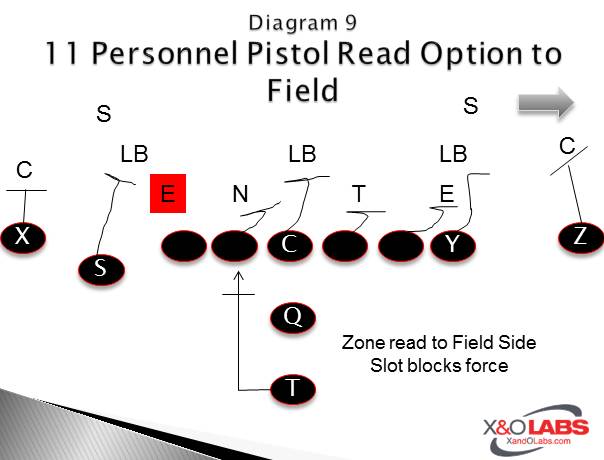 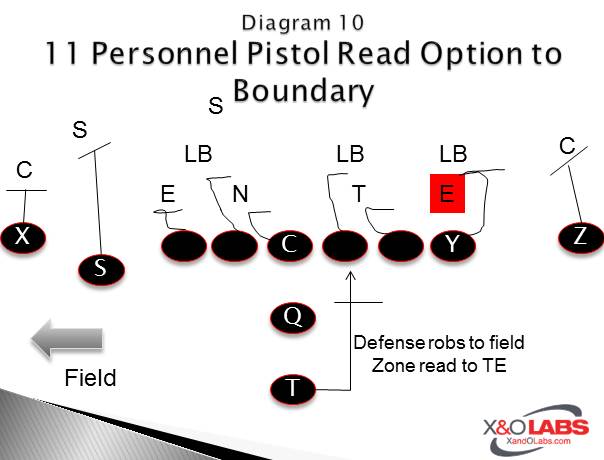 Mike Hallett, the head coach at Heidelburg Unviersity runs his Pistol out of a base 21 personnel grouping, but will also be in 11 and 12 personnel depending on the year.