Shut Down Screens, Swings, & Sprints with These Blitz Checks

Editor’s Note:  The following research was conducted as part of XandOLabs.com special report on designing a pressure check system, which can be found in its entirety by clicking here.

Four To A Side Pressure Checks To Defend Screens, Swings And Sprint Outs 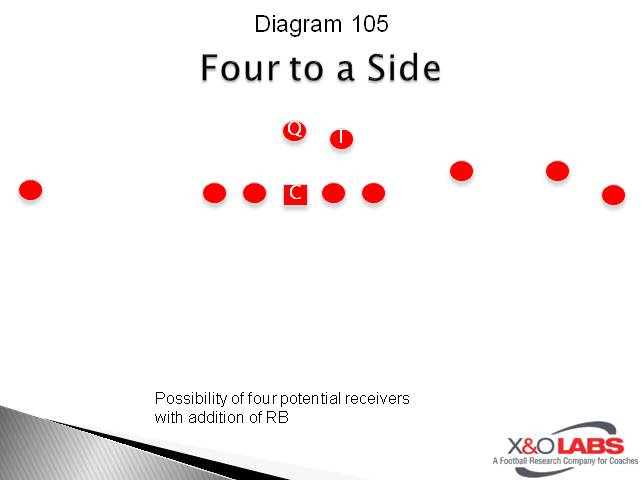 We wanted to combine sprint out protection beaters with a four to a side protection concept, which is usually utilized with the back set to the trips side.  There is a possibility of getting four out, which would usually dictate a pressure adjustment by the defense.  We’ve found that with the back set to the trips side there is an increasing possibility of some form of speed option or sprint out.  These protections will usually have a full gate with a TE and back off the edge or two backs off the edge changing the launch point of an offense.  The most common adjustment against sprint out concepts is to check the pressure to the receiver strength and get immediate edge pressure, forcing the quarterback to pull up prematurely and abort the run component of the run/pass option entailed in sprint out schemes.  One of the checks that Kuchinski uses is what he calls “Steve” which is a zone blitz designed to attack Sprint out. “We can run Steve out of multiple fronts,” said Kuchinski.  “We like running it out of the under frontso the gate including a potential TE stays away from our LB’s. Our DE to the pressure side has an Arrow tech on the Guard, our Nose has a Bull and Pull away from the pressure. Our DE away from the pressure has a Stab tech. Our OLB to the pressure has an Ice read on the TE/OT if he goes done on the Arrow DE the OLB will come tight down the LOS and inside of any backs (Diagram 106). If the TE/OT works out toward the OLB he will cross face into the inside gap (Diagram 107).The ILB toward the pressure side has a contain rush toward the up field shoulder of the QB and outside of any back to contain the rollout.”