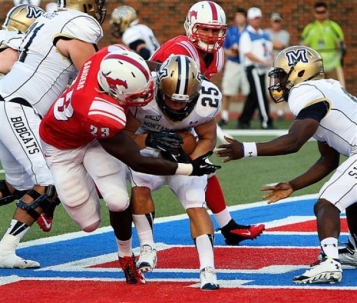 When conducting our research, it becomes tremendously apparent that coaches are spending ample amounts of time dissecting offensive pass protections to get an advantage in their pressures.  In fact, there were a good deal of coaches in our survey talked about using a pressure check system solely in third and long or passing downs when they can beat a protection. Once a coordinator has a “tell” on where the protection is being set, the possibilities become endless in attacking those protections.  How this ties into a check system is simple:  coordinators are devising their 3-4 most productive pressures to attack certain protections and letting their players make the adjustments.  Our intent in this case is to present some of those pressure concepts so that you can have an idea of what to bring and how to bring it to attack protections.

Editors Note:  In this case, we will only study base 6-7 man protection schemes.  As mentioned previously, Empty (or five man protection) stands on its own.  Since most coaches have up to 3-5 adjustments against empty, we will provide a more in-depth study on this topic at a later date.

While there are a myriad amount of protections that an offense can employ, the following four protections seem to generate more chances of drawing a pressure check system.  Having said that, there are four base protections schemes that we will examine in this case:  They are as follows:

Full-Slide Protection (Diagram 70A)- Full slide protection simply means the offensive line will slide all in one direction and put its back away from the slide.  Here, the offensive line could slide in many directions- to the field, to the boundary, to the QB’s backside, etc.  It’s important to get a tendency on where they are sliding most often based which could be based on down and distance and personnel. 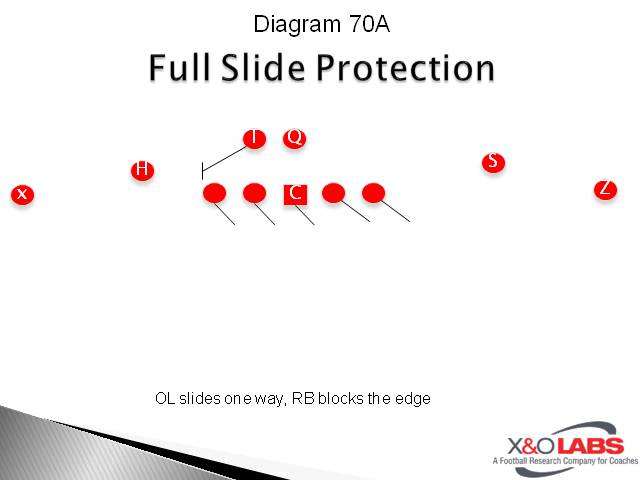 Insert Protection (Diagram 70B)- Insert protection means that the line will slide in one particular direction (to the right, to the left, to the field or to the boundary) while the back inserts into a opposite, unblocked gap. 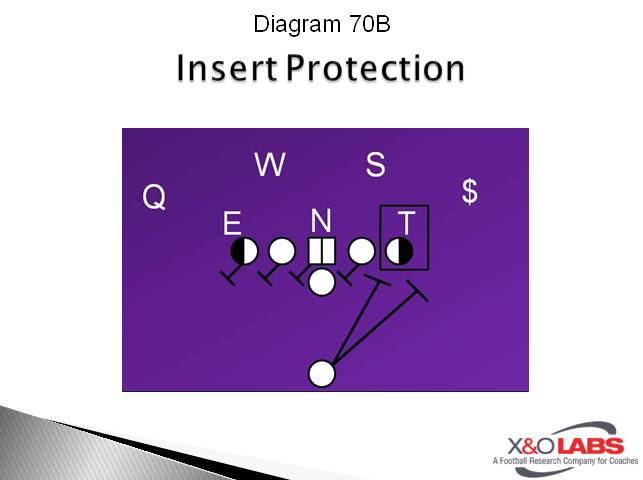 Man or Big On Big (BOB) Protections (Diagram 70C)- This is more of a man protection concept where the back is dual reading- from inside to outside second level player. 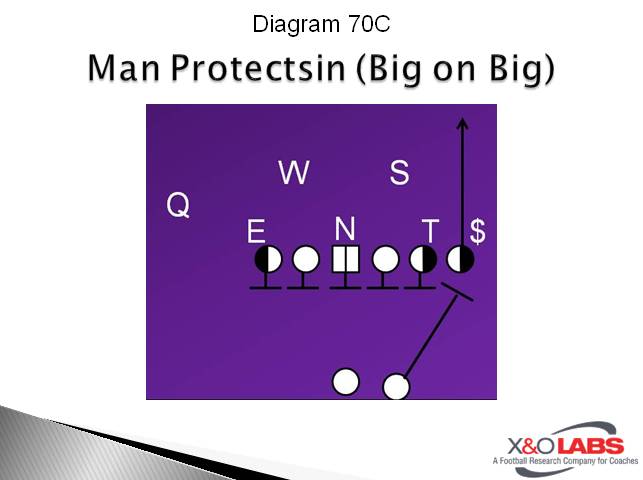 Sprint Out/Roll Out Protection (Diagram 70D)- This protection scheme is designed to get the quarterback on the perimeter.  In these protection schemes, the back will usually account for a perimeter defender so the QB can have a run/pass option. 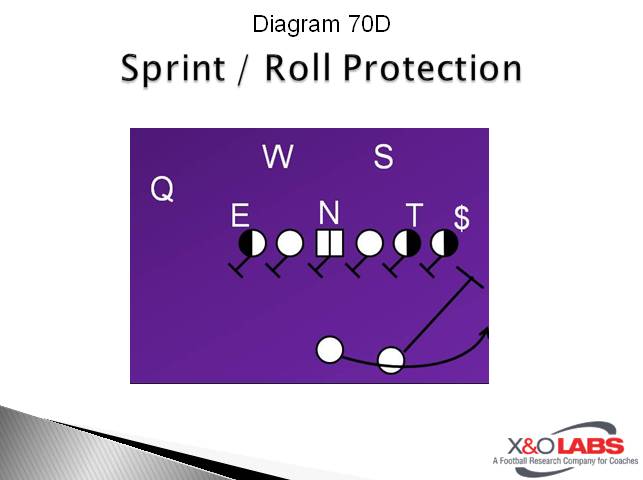 Once you understand the various types of protection an offense can employ, it’s important to devise those pressures that attack those protections.  This, of course, comes in the film room during the days leading up to game day.  Middle Tennessee State University defensive coordinator Tyrone Nix gave us insight into how he breaks down protections during the week.  Nix takes every game he has available- which could be close to ten by the end of the season when MTSU played in a bowl game.   “We start with protection and where they are sliding their front,” said Nix.  “You tally each time they slide a certain way. You count right or left, field or boundary, strong or weak, Y (TE) or away from Y (TE).  Every time they throw the ball, you chart where the Center blocks.  All of those things play a part.  Whatever adds up the most, you blitz opposite.  When you design a pressure, you’re just trying to bring four on three that’s all it is.  When the offense sees it and they slide it, then you can come from the other side or you don’t come at all.”