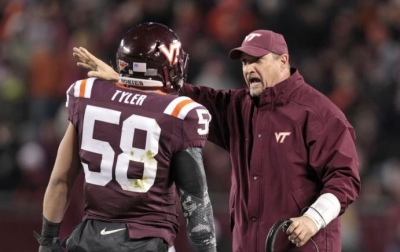 Last spring, X&O Labs Senior Research Manager Mike Kuchar spent three days with Bud Foster and his defensive staff studying the Hokies Bear Package, which the Hokies used on 54 snaps to hand Ohio State University its only loss last season. While the entire Bear study can be found here. Coach Foster also spend some time talking to Kuchar about what many feel is one of his biggest strengths as a defensive coordinator, his in-game adjustment ability.

Mike Kuchar (MK): What do you work off of in the game to relay your calls?

Bud Foster (BF): I have my call sheet which as the following components:

I got that down on my sheet. But let’s say you got an offensive coordinator who likes to run nakeds on first and ten to start. After each series, I write down the plays they ran to see if they are starting with what I studied. Is he staying on track or is he changing? I’ve been doing it long enough where if he has a little wrinkle in somewhere, he is probably doing something to counter off of it, like a naked. If he is going to run naked on one of his big naked downs and he hasn’t run it on the first two first and tens, I’m probably going to bring pressure the third time. You’re playing the odds.

MK: What is something about first down that has recently changed in tendencies?