The construction of Virginia Tech’s Bear package came in the result of a visit that Defensive Coordinator Bud Foster made as a guest to the University of Mississippi last spring. Rebels Defensive Coordinator Dave Wommack, who based out of a three-down front, was experimenting with a five down front in order to better defend the interior run game he was seeing in the Southeastern Conference.

According to Foster, what Wommack was doing was having his edge players, or defensive ends “wire,” which means read the guards in order to fit inside on any run schemes.

Foster loved the idea, but with the speed of the quarterbacks on Virginia Tech’s upcoming schedule (Ohio State, Georgia Tech, Duke, etc.), he was concerned about the quarterback perimeter run game. He had to find a way to accomplish two tall tasks: load the box to stop the interior run, yet be sound enough on the perimeter to defend the read option game. So when Foster got back to work in Blacksburg, he hit the lab to try to find a way to mesh what the Hokies were doing with its three down package, which was mainly used on third downs, to Wommack’s concept. A few days later, the birth of the Hokies’ Bear package came to fruition.

Advantages of the Bear Package

Like many defensive structures, we found the Bear package to be more of a philosophy rather than a scheme. In Foster’s words, “I can’t win by giving up 35 points. That would piss me off. I don’t want the offense to have [expletive]. I’m not a bend but don’t break guy. I make the quarterback have to make good throws with pressure in his face.”

According to Foster, the entire premise of the Bear package is to get +1 in the box to defend quarterback option teams. Its coverage structure is man heavy, so part of the decision in implementing it is having the guts to play with one or sometimes no high safeties in the middle of the field. Many times, Foster would play his remaining free safety in a “cheat post technique” which allows him to play both run and pass responsibilities based on his post-snap key. “You have to play with a free hitter somewhere,” Foster told us. “If you can’t expect guys to come off blocks and make plays against dynamic players, you are barking up the wrong side of the tree.” 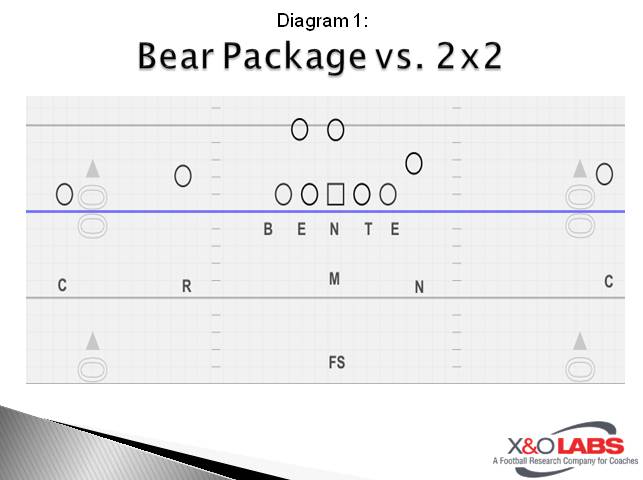 The base Bear package consists of the following personnel: