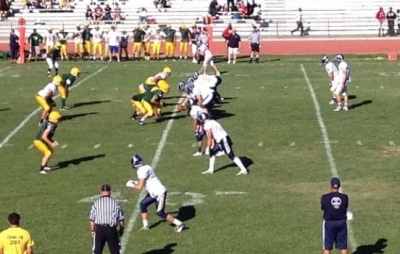 At Kennedy, our overall defensive philosophy is simple, “Less is More.” This is not a new philosophy and, for sure, it is not something dynamic. To put in more descriptive terms, we are a defense that is 4-2-5 in personnel, but a mix of College 4-3, Stack 4-4, and Split 4-4 in concepts. Below are a few basics in the set-up of our defense.

We try to minimize thought process by minimizing moving parts. We do this by having only one  strength call. Our strength rules are as follows:

We also work to keep things simple for our players. This is done in a few different ways, with the most important being that we only have our players know one position. We also only run 4 coverages, 4 base fronts, and a combination of plug blitzes and some 6-7 man pressures.

We believe that cover 3 is the easiest and most effective coverage to teach and that means more experience and faster play. We work to stay in cover 3 against everything unless game plan and pressure scheme calls for it. While some will argue this is too predictable, we have found that the best way to counter that is with reps and players that are playing fast.

When playing spread teams, I like to start by making small adjustments to your base coverage. This will then allow you to focus on beating them up front, which research says is the most effective place to beat the spread. Most spread teams that we face either run Big-on-Big or Slide Protection. By dissecting the protection scheme and attacking it, it allows us to get the quarterback off his preferred launching spot. This, in turn, will lead to more incompletions and sacks. When attacking the spread at the line of scrimmage, we utilize plug blitzes and line stunts supplemented with the occasional Man Free and Cover 0 pressure scheme.

An added bonus of using the cover 3, plus its adjustments out of the 4-2-5, is when you do decide to send pressure you can disguise it by running a fire zone scheme or you can run a 6 man pressure and run cover 1 or cover 0 behind it comfortably because of the added bonus of already having five DBs on the field. We have found this philosophy to be very successful against the spread teams we face.

Editor’s Note: X&O Labs’ Blitz Check Study illustrates the complete pressure check protocols coaches are using to put their players in the right pressures no matter down or distance. Read the study here.

Our cover 3 is our base coverage and the individual rules are as follows:

Mike and Will - Hook to Curl.

Both Mike and Will start in a 20 alignment. He reads the guard to the back field triangle. If he gets a pass read, his eyes will go directly to his primary threat based on formation. He will work to the top of the Hook to Curl Zone.

He aligns 3x3 in a “Read” technique or on the LOS three yards outside the EMLOS in “Solid” technique. Read and Solid are “Hard” called from the sideline. He reads the end man on the line of scrimmage (EMLOS) to the #2 receiver. If the #2 runs to the flat, he buzzes to the flat now. If #2 goes vertical, he looks to reroute through the seam and works to the top of the flat.

The weak safety starts at five yards depth and four yards outside the EMLOS and adjusts to formation and personnel. He reads the EMLOS to the #2 receiver. If the #2 runs to the flat, he buzzes to the flat now. If #2 goes vertical, he looks to reroute through the seam and works to the top of the flat. His eyes will then go to the #1 receiver.