Editor’s Note: We should be clear that this report focuses solely on a pressure check system, meeting blitzes that are NOT called from the sideline, but instead are CHECKED from the sideline based on various offensive variables such as offensive formation, down and distance, offensive personnel and field position. 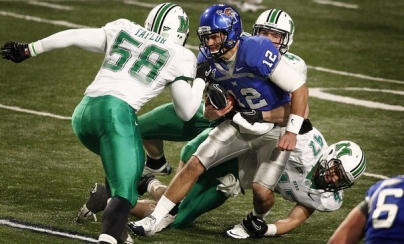 Plain and simple, this special report is centered on pressure- where to bring it, how to bring it and when to bring it.   When creatively designed and accurately called, a pressure system cannot only be detrimental to offenses it can be downright degrading.  While offensive coaches spend hours watching game film on how to attack defenses, defenses are finding new ways to counter what offenses present and they are doing so by pressuring tendencies on a down to down occurrence.  What if you were able to put your players in the best possible situation to be successful each and every play?  You’d be foolish not to.  A pressure check system allows you that opportunity.

Why Use a Pressure Check System

There are plenty of reasons as to why coaches use a pressure checks system, all of which will be explained thoroughly in this report.  The fact is 49.7 percent of coaches have been using a pressure check system for over five seasons now.    Of these coaches, 28.1 percent will teach a check on roughly 50-74% of every called pressure down.  What this means is that coaches will want pressure and communicate they will pressure, but where they pressure depends on various variables.   We were inundated with responses from coaches at all levels preaching the advantages of using a pressure check system.  The most common benefits are below: