One of the great joys of watching the college bowl season every year is to see what new and innovative ideas college coaches come up with during the time leading up to their games. The unbalanced extra point is one of these ideas. As a retired math teacher, I was intrigued by the angles and distances the formation creates and how difficult a block would be, assuming the snap, hold, and kick are on time. If the fastest 10 yd time in the NFL Combine is 1.4 seconds, then no one should be able to block our kick, if everyone does their job correctly. 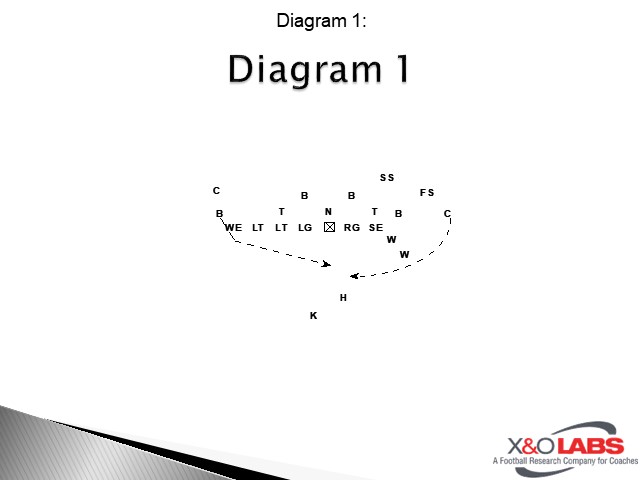 Step with inside foot up and lateral. DO NOT MOVE Outside foot!! Keep outside heel on the ground.

We punch up and out with their fists, so we have two hands in every inside gap. Arms should end up in bench press position. We teach them to hold their ground and absorb the rush.

DO NOT TURN YOUR SHOULDERS. If worse comes to worse, grab some cloth and fall backwards like a tree.

The wing steps inside like the linemen, but he punches straight out with his outside arm to push any outside rusher farther away. The SE steps & punches as the linemen.  We prefer the SE to be a defensive lineman with an eligible number. The snapper’s job is to deliver a tight spiral, hitting the holder in the hands. After he snaps the ball, he should get his head up, and try to help out the two guards in the A gap as best he can.