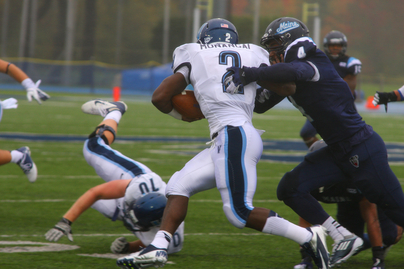 We all know how important special teams are, the age-old coaching maxims tell us this.  Adages like “one third of the game,” “can’t be neglected,” and “the difference between wins and losses” have all been repeatedly used by coaches to preach the importance of special teams.  Is this just “lip service” that coaches preach to their players or has the culture of buying into special teams starting to take shape?  This is what we wanted to find out when we began conducting research on what coaches are doing to not just preach, but act on the value of special teams unit. We all know it wins games, but the complicated and fragmented nature of the six different special teams (punt, punt return, kickoff, kickoff return, extra point, extra point block) make organization and execution of properly trained special teams a difficult proposition.

The main challenge comes back to skill development.  When you install an offensive play, you are able to lean on the blocking, passing, and ball carrying skills that you have taught for years to make the play successful.  When it comes to special teams, much of the time those skills are much less refined and sometimes very different than anything those players do during the rest of the game which leaves coaches stretching for methods to teach these skills.

So the question is how do you develop those integral special teams skills in a way that is quick, focused, and most importantly productive? The answer that many coaches have turned to solve this problem are special team drill circuits, which are rapidly starting to supplement the traditional special teams drills.  The fact is 66 percent of coaches rely on circuits as part of their special teams teaching progression. 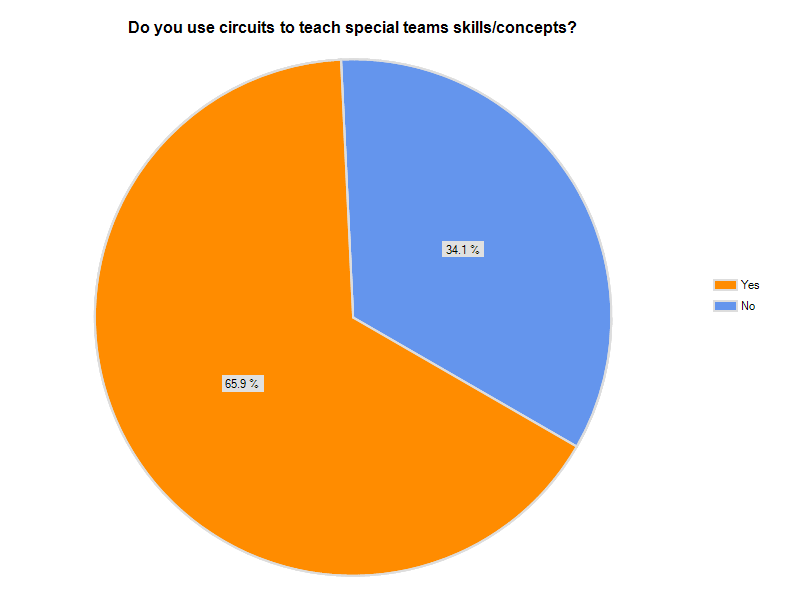 Interestingly enough, only 60 percent of those coaches have been using circuits for four years or less, which shows that circuit use is in the up-swing and that toward using circuits and that more and more coaches have seen the benefit in making this transition.  Below is a breakdown of the different advantages that coaches articulated for us as part of our research.  After speaking with the various coaches that use the circuit training progression, these are the most valuable benefits in employing the circuit system to teach special teams.

Benefits of the Circuit System:

Identification and Assessment of Talent

Many of the coaches in our survey explained that they use these circuits early and often in order to get all the players acclimated to general special teams concepts while evaluating their personal strength.  These coaches suggested that the circuit mentality allows them to focus on basic skills and see which kids can do them on a high level.  Once special teams positions are more defined, the many of these coaches run circuits less frequently.  Consider the words of the following coaches who participated in our research.

“For our punt block, it [circuits] have helped tremendously. Our coaches have had a chance to see every single player on special teams and we have had chances to exchange our thoughts on each kid's ability. It has helped us to identify who has a knack for it.” - Aashon Larkins, The Citadel

“Early on we use them to identify special teams players and to break down the important fundamental skills for each team. Then, as the season progresses, we do a circuit during early outs once a week that helps our whole team work on fundamentals for special teams. (Snap, kick, return, cover lanes, block protection).” – Rick Ward, Covina High School (CA)

“Circuits are a great way to maximize reps and evaluate talent. We will do circuits for individual special teams during the spring so we can see who can excel at specific skills. We will also incorporate fundamental tackling, blocking or block protection into our circuits so that it complements the techniques that we use on Offense and Defense. We will also do circuits for just Offense and Defense and evaluate our players there too. If a certain player demonstrates the ability to block in space, defeat blocks in space or tackle in space then we will put them on our special teams.”  Luis Hayes, Long Beach Poly High School (CA)

Time on the field is precious and the use of circuits is seen by many coaches as a way to accomplish more in one practice than they could without the drills.  The short (3-5 minute) drills run at a quick pace encourage a large number of reps and higher player involvement.  In many cases, the drills are established and either shortened or amended as the season moves forward.

“Time is always a priority for us in practice. We will use circuits to highlight skill areas that cut across multiple special teams (ex. coverage, open field tackling, etc.). We have found that the amount of time spent on special team circuits can carry over into better game performances.”  -  Michael O’Donnell, Rush City High School (MN)

“I use circuits during special teams practice to get the most amount of kids involved during a given period. It also is a continuation of skills that will be needed during offensive and defensive practice. I feel it is advantageous because of the work they get and it allows for everyone to get evaluated on a daily basis.” - Dan Wendel, Monmouth Regional High School (NJ)

“We have identified 6-8 specific skills/techniques that cross over to many of the different special teams. Using the special teams circuit concept allows us to teach those specific skills to a large number of players at the same time. We have found the circuit to be very effective use of our time. We use the circuit during spring practice and fall camp, then sparingly throughout the remainder of the season.” -  Steve Coburn Wasatch High School (UT)