The Efficiency of the Shield Punt Scheme

Researchers' Note: You can access the raw data - in the form of graphs - from our research on the shield punt: Click here to read the Statistical Analysis Report.

If you watched all thirty some odd bowl games season, we’d wager that a game didn’t go by were at least one team didn’t use the shield punt formation (Diagram 1).  The fact is it’s all over the college landscape.  While we couldn’t trace its roots or origins (although we do have Bill Stewart from West Virginia reflecting on it below) it spread quickly, at least in the college ranks.  As a high school defensive coordinator in central New Jersey, I have yet to face it in the last eight years - and as X&O Labs started to conduct its research on the topic, I’m glad I haven’t.  But I have a gut feeling that once this report gets circulated, it will only be a matter of time before it rears itself in my neck of the woods.  Truth is there is no reason it shouldn’t.  What you’ll see below is research garnered from hundreds of coaches supporting the idea that the benefits of utilizing the shield punt scheme far outweigh the risks.  As Keith Herring, the head coach at Brentwood High School (MO) told us, "We were leery when we put it in.  Until you see it happen you’re hesitant.  But it really does work."   You’ll also find that for the first time in this report, X&O Labs published actual comments from the survey that we released last week (I should point out that we only asked coaches who have experience either running the shield punt or returning punts against the shield punt to complete the survey).  The reason is simple: Our coaches loved to discuss this scheme, and they want to sell you on it, because they are sold on it themselves. 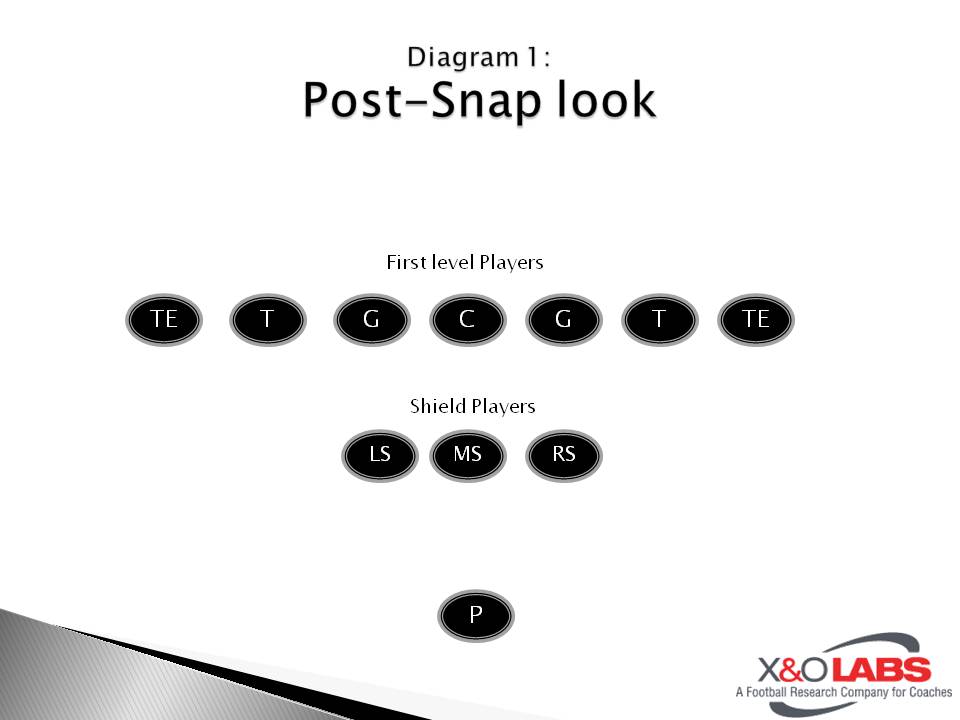 Among the hundreds of coaches we surveyed, 72.8 percent use the shield punt exclusively in their package.  The only situation they won’t is when punting from their own end zone.  So feel free to contact them to learn more about it, they won’t hesitate to return your call.  In fact, our coaches were so outspoken about the advantages of running the shield punt, we listed them below for you:

Case 1: Rugby Style, Drop Back Style or Both?

When executing the shield punt, it seems you have three options with the punter.  After reaching out to coaches, here’s what we found:

It seems that you either have an athlete that can handle the rugby style or you don’t and in turn can’t run it effectively.  Whichever style you choose, it’s important to point out the depth of the punter.  According to our research 66 percent of coaches aligned him at 14 yards.  Herring, whose teams hadn’t had a punt blocked in three seasons, toyed around with the idea of using a rollout style.  "We played around with rugby, but in the four years I’ve ran it, most guys were better just traditionally punting it so we stayed with it," said Herring.  "I like two things about it:  we get down the field quickly because we’re so spread out; also a lot of people don’t know how to line up to it.  Guys line up so wide on the tackles that they take themselves out of the play."

Walch, at the risk of being too predictable decided to vary the launch points of his punter from rugby to drop back.  "Why not try to use two different launch points on punt?" he says.  "You do it on offense and defense so why not special teams?  By doing this, the defense doesn’t know if he’s punting out of pocket or directly behind long snapper.  You’ve already put doubt in the punt blockers minds."

Walch used to have his punter roll either way and decide on his own accord when to punt.  Now, he coaches up the steps.  "We had two or three that were blocked because he had indecision on whether or not he should punt it," said Walch.  "Now we have designed steps, side shuffle, turn his body (for three steps) and on number four he’ll punt it away.  We don’t have a four and a second launch point like we used to."