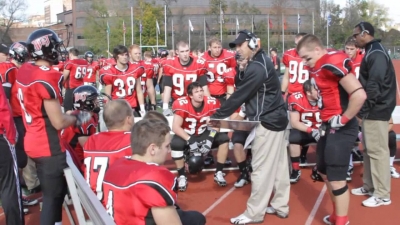 At W&J, we spend a lot of time on our punt team.  We feel that this is the most important special team unit.  The punt team can change the game positively AND negatively quickly with big implications.  You can change the field position and put your opponent in a long field situation.  However, with the slightest mistake, a punt block for a touchdown changes not only the score, but the momentum in a game more than any other play in football.  The punt team must be able to play under a large amount of pressure every time they run onto the field.  We want to be perfect every time that ball gets snapped.

The Pro-Style Spread Punt is a punt scheme that has lost a lot of its popularity in recent years in the college game.  A lot of schools are now going to the shield punt mostly because it fits their personnel and helps to put their guys in better coverage lanes.  This punt scheme is a scheme that uses depths and angles to take away a possible block that also allows you to maximize the number of athletes you have on the field for a consistently solid coverage.  We use the Pro-Style Spread Punt scheme because personally, I am a true believer that it is not only the best protection and coverage scheme but also because you can be very multiple in your looks and your options to build fakes.  It allows you to keep your rules simple and precise regardless of the wrinkles that you feel necessary to be successful.  This allows the players to PLAY rather than having to think about their responsibilities because it becomes a natural act.  I also feel that this punt scheme allows you to get more athletes on the field to play and tackle in space from a coverage standpoint.

The first thing that we have to look at is our personnel.  Which guys will play certain positions on this team and why?  These players not only have to protect the punt but also have to cover and tackle with intent to force turnovers.  This is our Pro-Style Spread Punt formation. 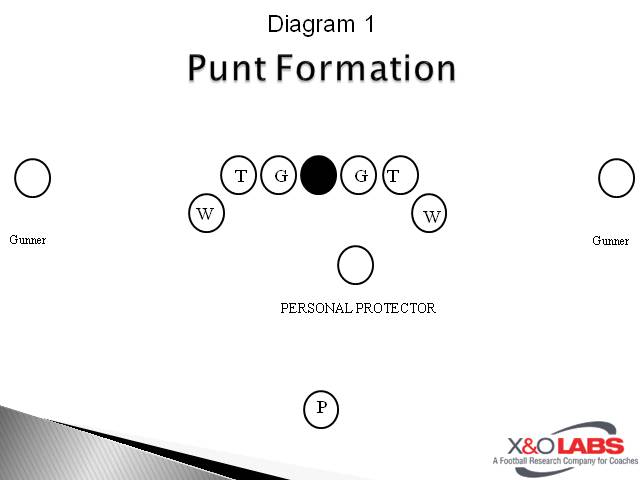 The gunners are players that need to be extremely athletic and have a good amount of speed to be able to win a one on one battle with the corner that is attempting to hold the gunner up.  I want this player to be a disrupter.  I want teams to look at our gunners and say, “We got to put a 2nd returner or corner over this guy so that we can get a step in the ground after we catch the punt”. These guys have to be able to react in a split second and change direction.

The wings also need to be a quick guy preferably with some length because their protection zone tends to be a little larger than all the other positions.  The speed becomes a major advantage due to the fact that the wing gets into his coverage lane about 1-2 yards deeper than the rest of the punt team.  These guys tend to be safeties or bigger receivers with ability to tackle.

The tackles are bigger safeties, linebackers, or tight ends with good athleticism and the ability to take on a rush through the C gap which is the 2nd largest protection zone in the scheme.

The guards are more stout players but still have a great deal of athleticism.  A lot of punt block schemes want to attack the A and B gap against our punt scheme.  These guys have to be able to accomplish their assignment with opponents attempting to bull rush them out of their gap as well as pulling them out of their gap.  They have to be able to kick slide and stay strong and balanced in their stance throughout the snap.

The long snapper is a guy that is going to get that football to the punter in the smallest amount of time accurately and consistently.  The long snapper will also have the responsibility of protecting an A gap based off of the personal protector’s call.

We want the personal protector to be the best athlete on the field but more importantly the smartest player on the field.  He is our quarterback on this team.  He sets the protection and makes adjustments if needed.  Also the majority of the fake game revolves around this individual.  We have used a number of different position players at this particular position in the past.  We have used free safeties, linebackers, and running backs.  You need to decipher what fits best for your individual punt team.  Determining the personnel is extremely important for this team!

In our punt scheme our alignment is 6 inches between long snapper and guard, 6 inches between guard and tackle, and the wing is 1 yard outside and 1 yard deeper than the tackle.  The guard, tackle and wing will align with their inside leg up with their feet staggered anywhere from 6 inches to a foot based off of comfort ability.  They need to be in a good balanced stance with their butt down, flat back, and shoulders back with their eyes up.  We always want to have our weight on the ball of our foot that is up, which is our inside leg.  Our personal protector stands in a good linebacker stance heels at 5 yards from the ball in the A-gap.  That A-gap will be decided off of whether our punter punts with his right foot or his left.  Let me elaborate, if the punter punts with his right leg our personal protector will be in the right A-gap with his heels at 5 yards deep and in a solid linebacker stance.  Our punter will be heels at 15 loose and relaxed and ready.  Gunners will align at the top of the numbers in a receiver stance with the ball in the middle.  If the ball is on the hash the gunner in the boundary will align at the bottom of the numbers and the gunner to the field will align on the far hash from where the ball is spotted.