Efficiency of the Shield Punt

In 2002, the Head Coach I was working for at Linfield Christian put me in charge of the Special Teams.  In prepping for that job, I watched every single special teams play from the 2001 season.  And this was back in the VCR days!  Most of you know what that was like!  Man, it was time consuming.  Sitting there with the remote, fast-forwarding to every special team play, etc.  That took me weeks!  Now, with programs like DSV and Hudl, that job gets done much quicker.

Basically, I wasn't thrilled with what I saw.  The team was 5-5 in 2001.  We had an average high school punter.  We used the standard 5 linemen, 2 gunners, 2 wings, 1 personal protector and punter formation that you see in the NFL and many other places (Diagram 1). 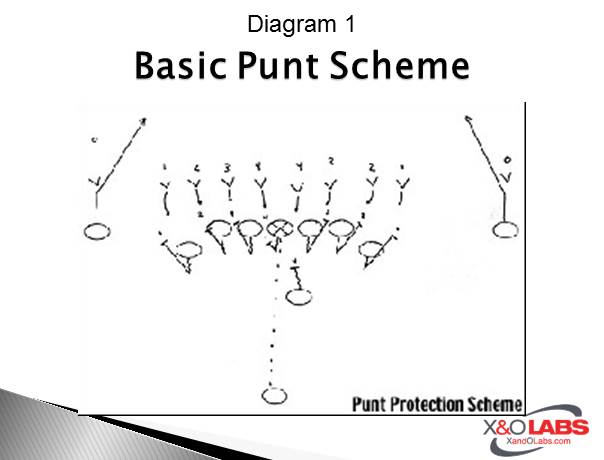 I noticed a few things while reviewing our punt team:

So, what do you do to combat these 6 flaws with the standard punt scheme we were using?  How do I "fix" this?

I began a search for a new punt scheme.  I went to all of the usual clinics and read a lot of articles and research online.  I finally found an idea I really loved, and had never seen on the field before- which was about the Shield Punt.  I loved it!  It was totally different than anything I had seen before, which I knew might present some problems for the teams we played.  A phrase I love to apply to Special Teams is "predictability breeds vulnerability."  This means that if you continue to always do the same thing, you can become vulnerable to attack.  So, something new like this would be great to use!

As with most clinics and articles that I find and want to apply to my own program, I took out of it what I liked, and left what I didn't like!  So, below is what I came up with and have taught for the last 10 years regarding the shield punt! 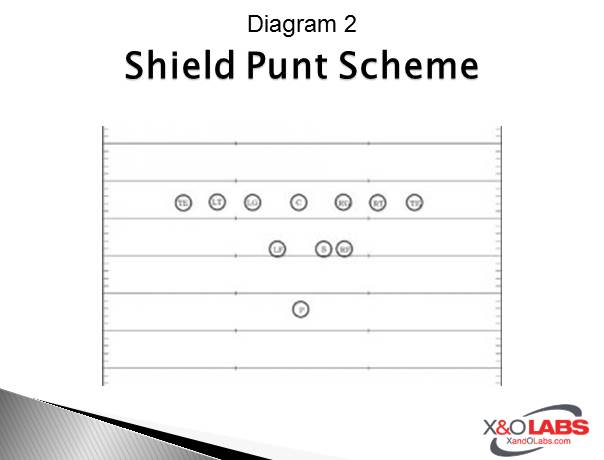 Why Use The Shield Punt

We get 7 players in the face of the returner pretty quick.  We aren't just relying on a few "gunners" to get down and make the tackle.  This is an aggressive punt, where we are on the "offensive" more than the "defensive."

We are using this punt to maximize our field position, while at the same time minimizing blocks and returns.  By getting our players down the field quickly, the returner will have a tough time making a good, clean catch, and won't have much room to run if we do this right.  Lastly, the return team will not be able to set up a return because we get down the field so quickly.

On the front line of 7, we want to use quick and fast linebacker/safety type football players.  These guys need to be able to get down the field, while also having some size and strength to them for "blocking" their men.  We don't want slow offensive linemen on this unit in the front seven.  The front seven need to be aggressive kids.  They need to know how to make a tackle in the open field if needed, that is why I like to use defensive players in the front seven.  The three players in the shield are your offensive linemen type guys.  Here, we value size over speed.  They have zero pursuit and tackling responsibility.  Their main job is to create a shield about 7 yards in front of the punter, to block anyone who comes through the front line to block the punt.  Therefore, big and strong offensive linemen types are the best for the shield.