At South Effingham High School, we have become accustomed to finding a way to utilize the kids that we have because we aren’t always blessed with kids that fit a certain mold. Going into the season of 2012, we had graduated our punter, and we did not have another player who we thought could step in and punt effectively in the traditional shield punt mode. We needed an answer to our punting game.

After much research, we settled on a concept by Abe Mikell that we thought we could incorporate into something that could work for us. We took his basic formation and rules and went to work. His article gave insight on how to line up and cover in meticulous detail. What really caught our attention was how one could use the rugby punt in a way to gain another offensive down. Since fourth down is still an offensive down, we can use it to put the other team in bad field position or as an opportunity to fake a punt and gain a first down in order to keep your offense on the field.

We had a very athletic WR/DB with long legs and a lot of speed, so we decided to give him a try at being our punter. The first couple of weeks we tried it, we ran into quite a few questions and roadblocks. That said, we also saw how our kids embraced this new idea, and everyone loved it. We had many fakes we could run out of this formation, and the ability our punter had to tuck the ball and run if he had the edge was another huge added benefit. All in all, we had made our decision to sell out to the rugby punt, and it paid huge dividends for us. In this article, we will try to explain our basic ideas on our personnel, alignment, protection, coverage, punter’s rules and fakes. 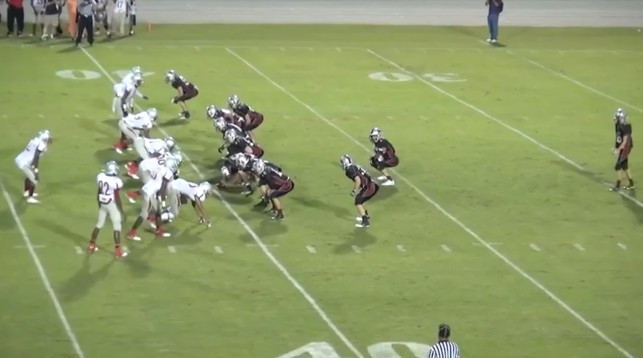 We originally used a mixture of offensive and defensive players. We handpicked players who fit this system the best, and it took quite a few reps in order to mix and match and make sure we had the proper players in the proper places to make rugby punting effective for us and put the defense in as much of a bind as we could. There are 6 linemen (we used our OL mostly, the left Tackle must be a threat to catch a pass), 2 wings (the one in motion needs to be a great open field tackler), an upback (must be able to handle a snap at times and block the “A” gap rusher). We have used our starting quarterback as the upback for the last couple of years. We rarely get a play side A gap rusher and just the fact that he is in the backfield seems to reduce the overall rush. We also use a split end (gunner type), and a punter (preferably an athletic player who can run).

The down linemen and wings will align in one-foot splits on the play side. The reasoning behind such tight splits is to condense the defensive formation as much as possible. By reducing the formation, you also make it difficult for the defense to overload one gap. On the backside, the Tackle can be a little wider (2-3 feet) in order to stretch the backside rusher a little wider away from the punter. Backside wide rushers should not be able to block the punt if the punter is working outside fast enough. Contrastingly, the backside guard must stay in a tight alignment because he has the largest gap to cover. The snapper is leaving the formation almost immediately in order to cover. The backside guard needs to be your best and quickest blocker up front. He has the hardest job of all of the down linemen by far.

The wings will align tight to the TEs. The backside wing will go in motion to the play side and end up in the position of a normal slot receiver and become a gunner in a normal punt situation. It is imperative that he aligns as close to the LOS as possible without actually being on the LOS. When he goes in motion, his hip almost needs to rub the down linemen. We will trap with the wing in motion and by him being close, we know we can’t get called for moving forward on the snap. The play side wing will block his zone like a normal lineman and get into coverage along with the down linemen.