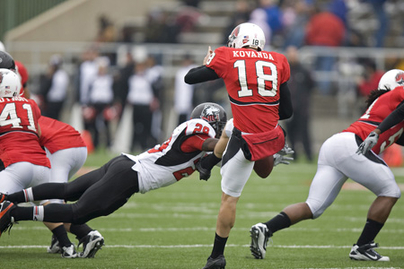 After kickoff, the second most popular special team that coaches use circuits to teach special teams is the Punt Block / Punt Return team.  Our research showed that coaches are using circuits more often to practice their block techniques as opposed to return skills.  For many of these coaches, the proof is in the statistics.  Take a look at a few of the quotes we received about the impact of these coaches punt block circuits:

“The circuits really help us in identifying guys who can actually block punts.  There are people who can train and get it done, and there are others who have a knack.  We found a walk on or two who has blocked a few for us.  One of our guys set a national record-blocked 5 in a season-but we had a total of 4 different guys block them in that same season.  The other thing that the circuit allows us to do is teach guys different angles to the block point, as well as learning to get back on course if they are knocked off at all. - Aashon Larkins, The Citadel

“Our Punt Return team this past season finished with 3 TD's, 2 Blocks, and was ranked #5 in D-III.  We were able to work on various rushing/block tech. and returners got that time to work on fielding/fair catching.” - Derek Prather, Trine University (IN)

“In a recent season we blocked 9 kicks. We blocked a punt in each playoff game leading to the state championship game.  We also return 2 punts for TD's off our block scheme (when we didn't get the kick). We practiced every phase of that during our drill circuits.” - Lane Frailey, Bixby High School (OK)

“We returned a punt for a TD this past season. My head coach has been here 28 years and a head coach for 35 years and never had one returned before. Our punt returner was a walk-on and became all-conference.”  Roc Bellantoni, Villanova University

“This past year, our kick return, punt block, and kickoff units had great success.  The punt block unit was the area where we utilized circuits the most. This unit disrupted 11 kicks this season in 11 games including 7 blocked punts and 1 returned for a TD.” Jamison Bisch, New Mexico Military Institute JC

Sean Knox (Special Teams Coordinator) and the University of Minnesota Crookston staff has established themselves as national leaders in special team preparation and they rely heavily on different sets of drills that they can use throughout the year.  They place a heavy emphasis on drilling these individual skills during their off-season conditioning and spring ball practices which often must take place in doors due to the Minnesota winter.  Before we detail the four drills that they have highlighted as part of their Punt Return Team circuit, let’s a examine the inside drill completion that they do with their players in large groups.

The first drill in this series focuses on the get off of the block personnel and specifically their shoulder and hip level as the cross the line of scrimmage.  By placing a small towel a few yards in front of the players, the coaches are able to reinforce the proper leverage that they expect as the players come off the line and engage the punt personnel.

Concept / Coaching Points:  The players start in their 3 point stance with an eye on the ball and explode off the ball on the movement.  They are forced to stay low due to the towel.  They need to rip with their inside arm to deflect the block and pick up the towel. 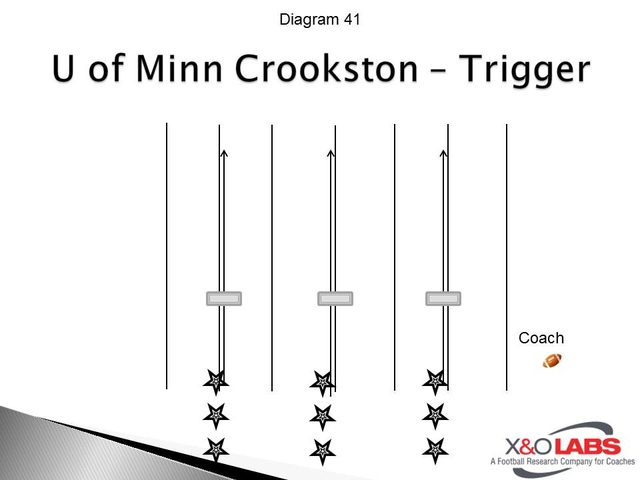 To see video of UMN Crookston’s Trigger Drill, click on the link below: