At WPI, we place a large amount of emphasis on special teams each week. I am extremely fortunate to work for a Head Coach, Chris Robertson, who shares the same vision and philosophy with the importance of each phase of special teams. As our Defensive Line coach, being able to coordinate our special teams gives me a tremendous opportunity to not only work with our defensive players, but also work with our offensive players and build relationships with those players as well.  Each week we spend a great deal of time breaking down our opponent’s punt team and look for ways to attack it. Our objectives and scheme we employ have changed each year based on our personnel as well as the strengths and weakness of our opponents.  We focused on the return game largely due to the personnel we had.  Our offense had the best scoring offense in school history and our defense was nationally ranked in several categories and us being able to use our punt return to flip field position was a huge part of our success on both sides of the ball. 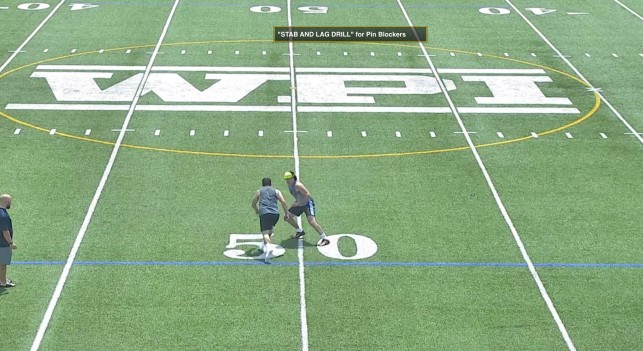 We believe it is important to not try to force a square peg into a round hole and be flexible as a coach to adjust to put your players in position be successful. Each year the strengths and weakness of our team vary which means we will adjust our scheme that best suits the strengths of the players we have on our punt return team.   In past years, we have been more of a pressure oriented team looking to block punts every weak. This past season we shifted to more of a return oriented team as we had less twitchy type athletes and athletes more suited toward blocking in space.   We always will have a block concept and a return concept for each game just in case.

In college football you can see a wide variety of punt formations as you move through the season.  It can be a challenge each week to have to recreate a look against a new formation. It also calls for personnel adjustments as well.  If we have to play against a team who punts out of a 3 x 1 formation our personnel for that week will have more DB’s to get the right personnel on the field.

When we break down an opponent’s punt team we focus on these five questions:

Our number one job for our punt return unit is to get the ball back for the offense. We tell the returner there is no shame in a fair catch as long as our offense snaps the ball on the next down. If we field the ball without a fair catch our next objective is 10 yards.  We simply want to get the equivalent of a first down. For example, taking our offense from the minus 25 to the minus 35 has a huge impact on scoring percentage. This year the return game was what we focused each weak. We did not have the right guys available to get to the block point and most teams we faced had solid operation times.

Our primary punt return scheme is a wall return. What we like about the wall return is the ability to bring pressure from one side to force the kick but also have a chance to block a punt and also have a return on the other side. We will run the wall to the field or the boundary based on the punters tendency or if we feel our opponent is overplaying one side. It is critical for players on the unit to understand what leverage they need to take this scheme work.  To us it is man to man basketball defense, deny your man getting to the basket, which in a punt return scenario, would be the returner.

Generally speaking, we will have a pressure side and a pin side on our wall returns.  The pressure side players are attacking the block point and working to the wall and the pin side players are blocking their assigned men with return side leverage.  At times we will bring pressure and use some players to pin on that side as well.  We will do whatever we need to get an advantage for our returner to have a chance to get at least 10 yards.