Developing A Personnel Driven Kick Off 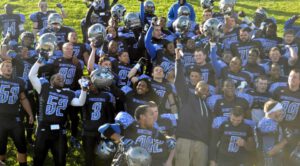 Editor's Note:  A Long Island native, Coach Veloso played for and earned his BA at Denison University and received his MS from Indiana State University. Currently the Associate Head Coach at Becker College, he coaches the Running Backs/Tight Ends and Kick Off team. He has coached for Curry College, the Peoria Rough Riders (UIFL) now the Peoria Pirates (AF2), and volunteered at Indiana State.

Special teams affect field position and momentum. As much as we want to dictate the tone of the game by our play, we most certainly do not want to put our team in a disadvantage by letting emotion overcome discipline. Because of our teams youth (76% of our roster going into the 2012 season were freshmen and sophomores), our players would sometimes let their emotions get the best of them which contributed to assignment errors.

As much as coaches preach that special teams are 1/3 of the game, how many of us actually use 1/3 of our practice time on special teams? We know this, yet sometimes we get caught up in trying to out scheme teams without having the necessary time to practice and hopefully master all our ideas. As much as I would like to believe that our initial scheme was simple, easy to learn and teach, the statistics proved otherwise. In our 1st 7 games we allowed 21 yards per return including 1 return for a touchdown.

Our goal is 15 yards or less per return. We had to make changes. My first instinct was that we need to change personnel. We started the year with seven freshmen on our kick off team. Looking back at our depth charts, I realized that I had already used different players, or used players in different spots. The problem wasn’t necessarily our players. It was me.

It is my job to put our players in a position to succeed. I tell our players in meetings that if they don’t know what their job is (their assignment), that’s their fault. We have meetings, they watch film and get plenty of handouts. If they don’t know how to do their job, that’s my fault. It’s my responsibility to teach them and put the right guys in the right spots to do our jobs. Failure to do so was putting our defense at a disadvantage.

The biggest problem I identified was that each individual was thinking too much on the field. I had to simplify the scheme so that our athletes could let their talent and energy take over.

Our scheme started out what I believe to be fairly standard. We had 2 "Head Hunters", a wedge-buster, contain players, safeties, and coverage players. Opposed to numbering our players L1-5, R-5, we number our players 1-10. In our system, our kick offs are numbered. The 3 numbers we use indicate who are the head hunters and the safety player opposite the kicker. All others fit accordingly.