The execution of Kickoff coverage is, especially at the high school level, one of the most opportune times to either make an explosive play, or in the case of the coverage unit, give up an explosive play that either ends in 6 points or creates a short field. In most cases, the typical H.S. kicker has the ability to roughly hit the 5, 10, or 15 yard line so in most cases, kicking the ball into the end zone for an automatic touchback (federation rules) is out the question for most High School Teams. In the end, a Kickoff is a defensive play that asks all 11 players to close the distance between themselves and the ball carrier, avoid unnecessary blocks, defeat necessary blocks, and in most cases tackle in an open field or “ball away” situation. Therefore, like any play in football, the scheme and the skills needed to execute it are extremely important in limiting yards during the return and improving field position for the Defense. At Southern High School we have incorporated a “Pop 30” philosophy in our coverage scheme. However, the execution of our scheme is really how we have incorporated our established Force and alley rules as well as our Rugby-tackling and “ball away” principles to open field tackling that ultimately make our kickoff coverage unit a successful part of our special teams structure.

Even though from a schematic aspect this article is dedicated to Kickoff Coverage, an explanation of the applied defensive skills with regards to Open Field tackling and Force/Alley rules are needed before applying them to our Kickoff Scheme

As a Defensive Staff both at Southern, and before that South River High Schools, we have completely dedicated ourselves to a rugby tackling style methodology. As a staff we do not feel you can be an effective tackling team in either Defensive or special teams play without completely drilling the concepts of tracking the near hip or pec, contacting with a same foot/shoulder fit, wrapping and pulling tight to the body, and finishing with either a drive for 5 steps or a hawk roll situation. We drill these principles continuously throughout every practice and in many ways, they are drilled in as many non-contact as contact situations. Like many Rugby style schemes, we split our tackles up into three scenarios that really fit into one of two categories. 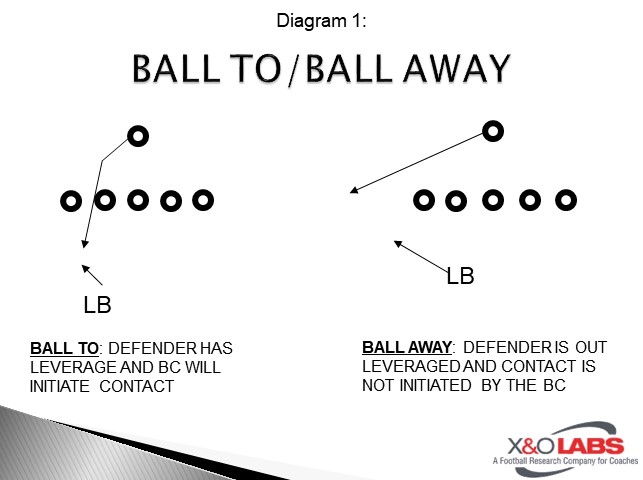 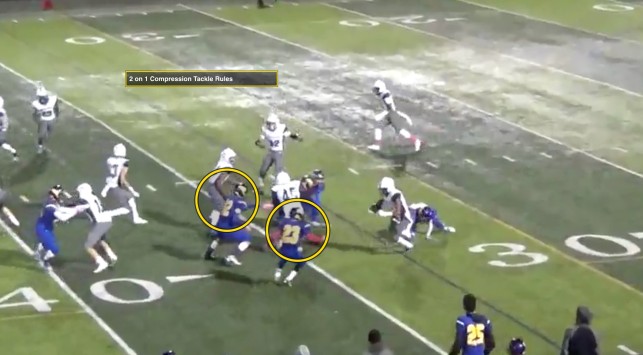 Editor’s Note: Included with this report is a tackling clinic cut up we have used as a staff that highlights the coaching points of both a ball to and ball away tackle.  It is at the end of this report.

Even though this article is about open field tackling and how it applies to Kickoff Coverage, it is warranted to first begin to talk about a Ball To scenario. A “Ball To” situation is a situation where the defender has leverage on a ball carrier and there will be contact initiated by the ball carrier. For example, an inside linebacker playing downhill on an Isolation or power play. In this situation the Defender is going to have to initiate contact as well and can use the pec or upper body as the primary key to fit same shoulder/same foot on the ball carrier. In most cases a Ball To tackle, which we refer to as a profile tackle, is an in the box situation or near the line of scrimmage, so it usually is not going to be a solo tackle. In this case we are contacting, wrapping, and really focusing on driving for 5 and limiting yards after contact while also providing a head out of contact situation in a high contact area.

Ball Away situations in our methodology really have two scenarios that can both apply to kickoff coverage. Ball away situations are situations where the defender has either lost leverage or comes to balance in a no leverage situation and must properly fit to either funnel to an adjacent defender with leverage or must regain leverage in a 1 way go situation where the ball carrier is not initiating contact. 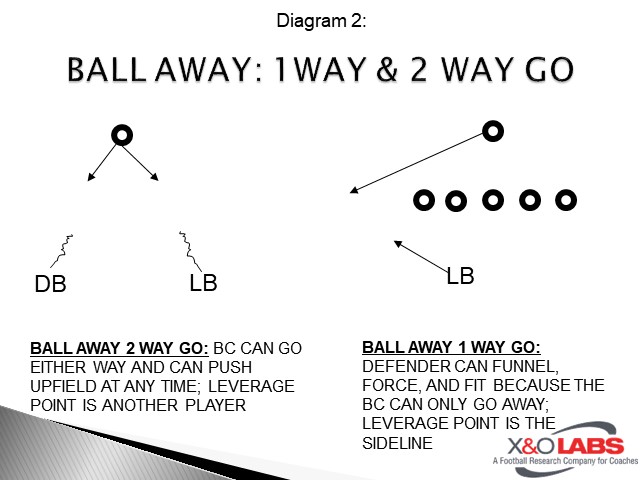 The first situation is when leverage is lost in either the open field or away from the box/leverage position and the ball carrier changes direction or bounces into the alley with a 1 way go. We refer to this as a “Hawk” Tackle in our verbiage. In this situation the defender has lost leverage and now must use the near hip as the primary point of contact with eyes, near foot, and near shoulder. Since the hip is a smaller surface than the pec, the wrap and squeeze of the legs is an imperative detail to effectively bringing the ball carrier to the ground because in most cases, there will not be an immense amount of contact to aid in getting a solid fit same shoulder-same foot. The last detail that is important is the concept of rolling towards and not away from leverage, which does not provide the opportunity for a broken or missed tackle.