Every coach preaches about how specials are one third of the game and are vital to the success of your football program. However, not every program structures its special teams’ practices properly or utilizes special teams’ schemes as effectively as they do for either defense or offense. At St. Anthony’s H.S., special teams has been, and is, treated almost the same as offense and defense. Individual periods for all specials are used in practice and schemes will be added (or removed) based on opponents’ weaknesses (or strengths) in an effort to gain as much of a competitive advantage as possible. In this report, I will share some of the schemes related to our kickoff coverage and our “kickoff offense” that has helped us win games and a semifinal playoff game this past season.

Everyone has always referred to kickoff as a coverage team or a defensive play aimed at pinning the return team, and subsequent offensive team, deep in its own territory. But what do you do when you feel that your kickoff team can not only pin the offense deep, but force a turnover that can essentially change the path of a football game? We have instituted a kickoff “offense” that is essentially a series of onside kicks that are used based on game planning and identifying the oppositions weakness in their kickoff return game.

Would you ever have an offense consisting of only one or two plays? Of course not, so why have only one onside kick in your game plan. Some may argue there is not enough time in a practice to efficiently practice multiple special team plays. However, there is always time if you make it. We are fortunate to have a high number of players in our program and try to use everyone somewhere on the football field. For many players that is on specials.

Our kickoff onside team can sometimes be referred to as a kickoff offense since we are designing the play to give the ball to our offense. We start with the ball on kickoff, so we feel we have some control of where the ball goes and because of that we look for the least athletic player on the return team and study him. If he is on the front line, we have a few options in our onside kick game to take advantage of him. If that weakness is on the second level of the return team, we have a couple answers for that player as well. Through film study we determine if that player is more aware of his right side or left side and what he is better at in fielding a kicked ball. Is it hard for him to handle a ball on the ground or in the air? What about going to his left or to his right? Once those answers are determined we use one of several onside options.

The first kickoff offensive play we will discuss is our “Fire” onside. Fire refers to the kicker kicking the ball on the ground with a lot of speed but not enough to where the ball jumps above the head of the frontline returner. Our fire call is usually done by telling the kicker first a number of a guy on the front line. The head coach, who calls the special team’s plays, will then give a direction. The direction will tell the kicker to fire the ball off of the predetermined returners right side or left side. The kick must not bounce too high and must, at a very minimum, hit the defender in the hopes that it ricochets back to our kickoff team. If the front line moves and the ball goes through to the second or third level, we are still in good shape since their stud returners most likely will not field it. Please refer to diagram 1, which shows a standard even kickoff team with 5 guys on either side of the kicker. 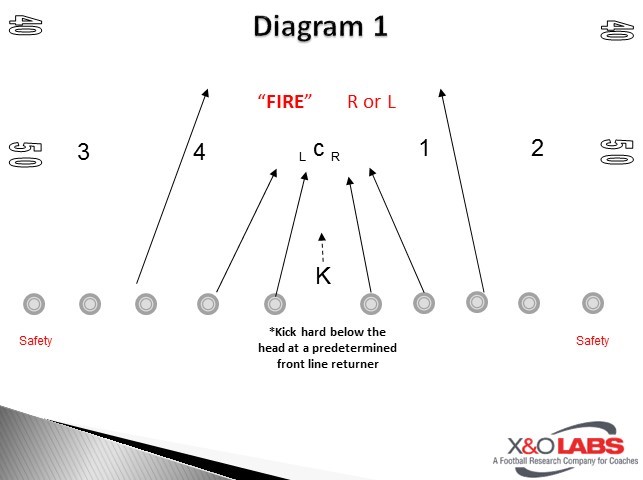 ‘Fire’ Coaching Point: The kickoff team’s inside guys should never go off sides and must have eyes inside to the ball at all times. It happens fast, so they must sprint to the spot and breakdown in a shortstop type position with knees bent and hands in between their feet ready for a bounce or ricochet.