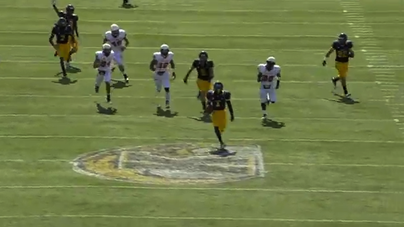 Going into this research project, XandOLabs.com had assumed that kickoff return would be the special team that had the least number of coaches using circuits.  Our premise was simple; the skills used on kickoff return are much less transferable from one position to another as opposed to nearly every position needing to know the same skills like on kickoff.

While that assumption did prove true, I must admit that I was surprised by the prevalence of kickoff return circuits among the coaches polled.  Nearly 56% said that they use circuits for kick return, which is double the number that I would have guessed. 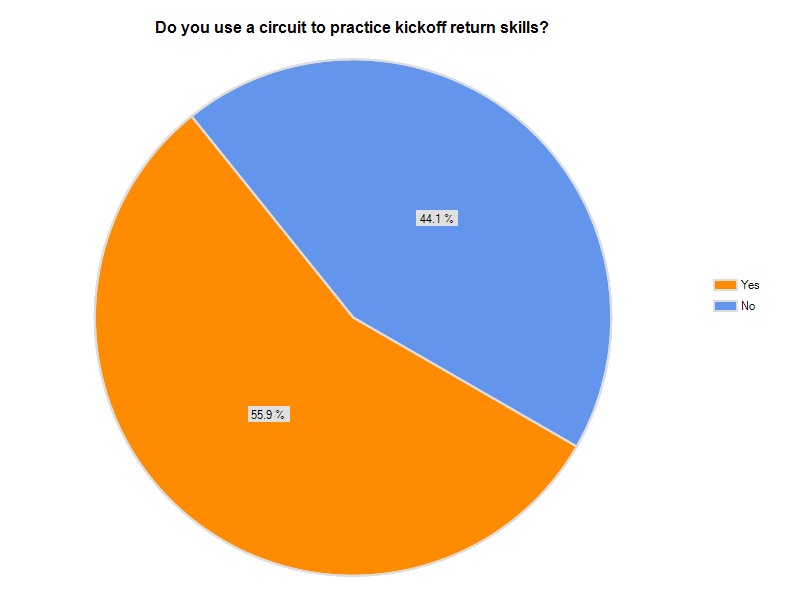 The coaches that participated in the survey spoke glowingly about the power of circuit drills to impact the productivity of their kickoff return teams.  Here are a few brief examples of their commentary:

“In 2012, our had an average return of 22.7 yards good for #17 in the nation at the D-III level and resulting in 2 touchdowns.  In some games teams would squib or short-kick our KOR team. The circuits allowed us to work with the each different position and allow for returners to get indy work as well.” - Derek Prather, Trine University (IN).

“We try to use drills that simulate game situations and create a competitive atmosphere. We teach Kickoff Coverage and Kickoff Return blocking in one drill that creates competition daily. It also lets me know what players fit the best in each special teams situation. We finished 2011 ranked 36th in the FCS in KOR.” - Brian Morgan, Prairie View A&M University

“Through the use of the circuit we were able to get a lot of repetitions to our special team members.  This in turn gave us an opportunity to provide input into the effectiveness of their special team skill.  In our KOR circuit, we were able to work on each part of the return and for instance give the blockers an opportunity to face a number of athletes in an open area.  We saw the effectiveness of their blocking technique improve.  In Kick-off Return, as you know, we don’t always get a “clean look” at an opponent and just getting them out of their path (Lane) may be enough to break the returner free.  Using the circuit gave our KOR team members a lot of reps in a short period of time.  In addition, as we prepared for our next special team practice we could alter the circuit to tailor the needs of the team.”  - Pete Kowalski, Westfield State University (MA).

One of the more productive, straight forward circuits submitted came from Tunde Agboke the defensive line coach at Marist College.  According to Agboke, “It is critical the players on this unit know how to block in space.  Thus, we spend a great deal of time doing individual blocking and dropping drills. We use this circuit at least once a week. Once we accomplish that goal, then we come together and run our schemes.

These drills have helped us tremendously. We have be able to quickly identify the guys who can and can’t do it without wasting weeks or months of practice time. We see KOR as the first play of every offensive series, and we are looking to go deep.”

This basic cone drill teaches players the fundamentals of their takeoff, angle, transition into the block phase and ability to create proper leverage.

Concept / Coaching Points:  “We use this drill to teach our players the proper drop angles and technique. We want to make sure they don’t round off corners once they put their foot in the ground to come back up field. They must also simulate striking a blow.”- Agboke 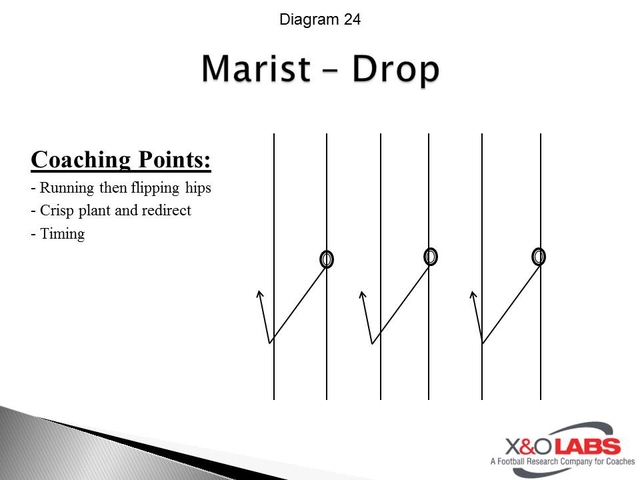 To see video of Marist College’s Drop on Air Drill, click on the link below: