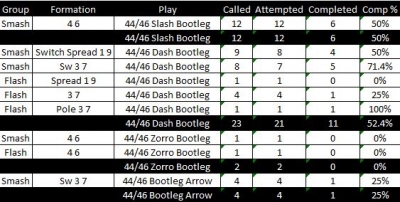 After the conclusion of each season, many coaches start the progression of evaluating and assessing each concept to measure its proficiency. It’s a process intertwined in two folds: cutting ineffective concepts from their play menus and building on productive concepts for future seasons.

While conducting our research on this topic, we’ve heard the following phrase uttered many times, “We should’ve called that play more.” So, we studied how six coaches (five college and one high school) use their self-scout process to evaluate what worked this season and what didn’t. Their question and answer session is below.

1. How long after the season do you start your self-scout procedures?

(JI): “We do a weekly self scout during the season by play efficiency, down and distance and personnel tendencies. We also do a weekly efficiency report to determine why runs/protections were inefficient based on technique errors, assignment errors, scheme issues, etc. After the season, when we have a little more time, we go back and do a little more in-depth evaluation.”

(GE): “We will start our self-scouting during the season. Every Wednesday, I will receive a report from our offensive GA on our play call tendencies. We track our run/pass tendency based on the following downs: first down, 2nd and 7+, 2nd and 4-6, 2nd and 1-3, 3rd and 7+, 3rd and 4-6, and 3rd and 1-3. We will also track our play calls by formation and our run/pass tendency by formation. After the season is over, I usually begin our end of the year ‘efficiency’ reports after the signing day in February.”

(SW): “I start after the AFCA convention on the official breakdowns, but I watch film throughout recruiting.”

(MK): “We will self-scout after the first three games of season, before going into district/conference Games, and then self-scout again around the game 6/7 mark. These are just to help get a feel for how our identity evolves as an offense over the course of the season, what are our best plays, followed by getting our tendencies. The big self-scout for me comes almost immediately, usually the day after the last regular season game. This is so we can start preparing for playoffs and really understand what tendencies we have developed over the course of the season. We start having a plan to have ‘tendency breakers’ built into the game plan. We always assume the opposition has almost all of our film; therefore they will have a game plan of how to try to slow us down based on our tendencies. We need to do our best to recognize that and prepare for it ourselves. The goal is to always have answers in the game plan moving forward. Usually our most recent three games are more heavily valued as a reflection of who we are. Upon completion of the season (it does depend on when it ends) we won't usually do a whole season analysis until January. We clear our heads, take a step back, and then merge everything together and run reports and attempt to do an analysis of what we did well and what needs to be improved during the off-season.”

(JO): “It varies. Due to our off campus recruiting schedule we hit the road right away and do not get too in depth with the self-scout until around Christmas break. At that time, we’ll begin the initial data and research. Thus far I’ve taken a look at our run/pass ratio, RPO ratio, and cleaned up some date entry mistakes to streamline reports.”

(VD): “The self-scout has become an ongoing process throughout the season. The weekly data is kept in the video editing system, currently using HUDL, under the custom fields. Once the last game film is graded the post season procedure begins. Initially this was something that started at the end of the season, but as the procedure was completed it became more productive to complete week by week to utilize real time data to make decisions and adjustments.”

2. How long does the self-scout procedure last?

(JI): “We will do our end-of season self scout analysis after signing day in February. It will last about two weeks.”

(GH): “Our off season efficiency reports take a few days to do.”

(MK): “These in-season self-scouts are fairly quick, only about an hour or so. HUDL really helps cut the time down needed to organize the material and run some reports.”

(JO): “It’s off and on from Christmas through March. We’ll try to get most of it done with new questions and angles before we approach other programs or start heading to other spring practices. Our spring ball doesn’t start until mid-April, so we have a window to make adjustments.”

(VD): “Self-scout procedure is a constant assessment used throughout the season and in the offseason. It helps to determine the drills that will be scheduled during individual period during the season. It also helps to determine what the off-season focus will be for both fundamentals and scheme. The self-scout also is used for the re-evaluation of the position manual.”

3. How do you delegate the self-scout process to your staff? Which responsibilities do you give them specifically?