Re-Aligning Your Program’s Culture Every Off-Season

Walking off the field in 2014, defeated in overtime of the championship game, I thought to myself “Our football program has arrived.” Nothing can stop us.  We have built a successful program, and next year a state championship.

Walking off the field after the final game in 2016, I thought to myself, “what just happened?”  It was the first time in school history a team went 0-9.  Just that fast, we went from the top of the league to the very bottom.  As coaches, we had to come up with a plan.  This plan had to incorporate more than just X’s&O’s; it had to improve all parts of the program and the athletes.  This is the plan we spent the next six months developing and implementing.  Over the past two years we have consistently tweaked it, but our mission has been the same: love, serve, and care.

After going 0-9, not many people from the student body, players, parents, and community members believed in our program.  We had to give our athletes something positive for them to become part of and gain confidence, so we created a Peak Performance Program. The first aspect of our program was to teach the process of becoming great, the focus on different ways great athletes prepare themselves.  We started in the spring with each grade level reading different books.  Next year’s sophomores read Chop Wood Carry Water by Joshua Medcalf, juniors read The Hard Hat by Jon Gordon, and the next year’s seniors read The Training Camp by Jon Gordon.  As coaches we also read the books and created action plans for each book that we gave the athletes.  Also, we found players from the 2014 team to come back and help with each of the book reads.  Players had to fill out their action plan of improvement.  In addition, parents signed the plan saying they had discussed it with their son. 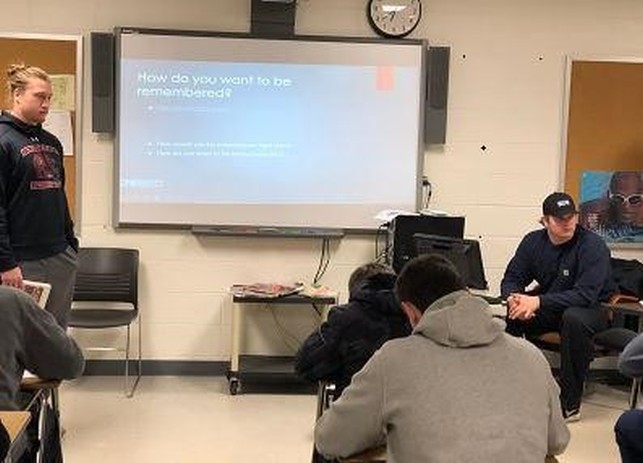 Secondly, we wanted to create leaders in our football team.  We did this by creating unit leader positions.  We have a Google form, for a player to fill out, to apply to be a Unit Leader.  In the final meeting of the spring, all the grade levels come together for one final breakfast. Coaches printed copies of the applications of the unit leader form, and the forms were handed out to the rest of the team to read and vote for the top eight.  The top eight vote getters become a unit leader. A few weeks later, the unit leaders drafted their teams. Drafting their own team is very important because our program is based on a wide range of competitions, and at the end of fall camp we crown the unit champions. We also met with leaders and discussed leadership qualities and the ones that they most represented. It is important for coaches to help athletes gain leadership characteristics. We used a variety of methods: from Make Your Bed speech, parts of Jocko Wilko audio book, and guest speakers.

The unit leaders review the five core values we live by as a football team.  The brand we created from our core values is Pound the Stone.  Unit leaders review the core values every year and see what ones they want to change.  The values have not changed since the first group of unit leaders and coaches came up with the list in 2017. They are TPW (tough people win), BCD (blame, complain, defend), talk to yourself, don’t listen to yourself, play present, and finish empty.  The coaches reinforce these ideas every day.  We put Pound the Stone and at least one value on every shirt we create.  We use the words Pound the Stone and not core values because athletes like the brand we have created.  When we use the term core values, they perceive that as preaching at them.