In this final case, we are going to present our research on the most commonly used offensive, defensive and special teams structures by successful head coaches.  Now, we realize that this facet of our research could be completely arbitrary. After all, coaches all across the country have found ways to win with various schemes, often changing them to fit their personnel.  Still, we were curious to find if there was a common thread with certain schemes in championship level coaches.  After all, complete thoroughness is always the mantra of devoted research.

Question:  Which of the following offensive structures are you most comfortable using?

Among all group categories, 39.2 percent of coaches are using spread style offensive structures (10 personnel) as the base of their offensive system.  We didn’t find this to be surprising, but what we did find interesting was that the next most popular structure was pro-style personnel systems with 18.1 percent of all coaches selecting that option. 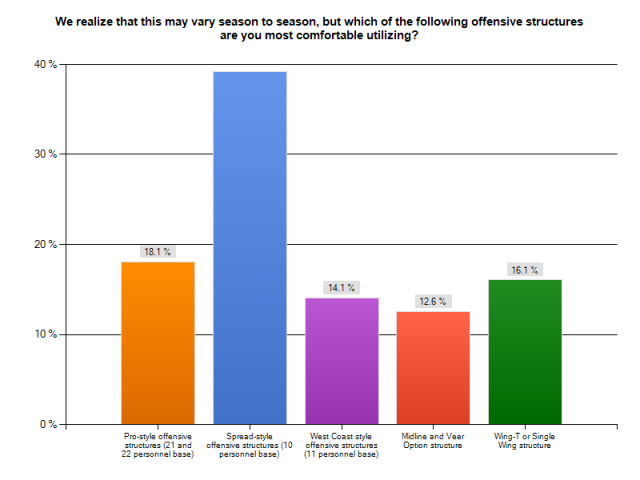 So, when we separated our research down into those specific groups and here’s what I found:

Question:  What is something you’ve done recently on the offensive side of the ball that has benefitted your program tremendously?

Naturally, we targeted this question to those coaches who have won more than 75 percent of their games the last three seasons.  Their responses are below:

“We have committed to running an up tempo option attack which has allowed our program to utilize players that may otherwise not have played.” - Matt McLeod, Head Coach, GraftonHS, [email protected]

“Implemented parts of the Nzone system especially the tempo. We scored the most points we have ever scored and we set a record for most points in a half in the NYS quarter final with 54 and scored 60 in the first half in the NYS semifinal against the #2 team in the state.” - Joe Whipple, Head Coach, Schalmont High School NY, [email protected]

“We changed how we call our formations so that we can get the personnel we want in the right position. We also eliminated a lot of our playbook to concentrate on the base concepts we utilize.” - Steve Pyne, Head Coach, Central Catholic High School - Portland, OR., [email protected]