“Failing to prepare is preparing to fail.”  We’ve read this mantra in too many weight rooms, meeting rooms and practice facilities.  While it may be trite, it is profoundly true.  Successful head coaches master the art of preparation and this case is devoted to preparation.  It’s focused around off-season development of a football program, from strength and conditioning to developing team building to conducting practice.  We knew that many coaches were interested in this facet of the game, because it relationship to success is evident.  Here, we present our research on what makes those coaches “win” in the off-season and how they prepare themselves to win during the season.

But before we present our finding, it’s important to note we did something else that was totally different than previous reports - we segmented our research into separate areas.   We wanted to target successful head coaches in this research and while we’re quick to point out that success is not all about wins (there are certainly too many other variables that add into that equation) winning is truly the main benchmark that we used to separate our readership.  We decided to segment our research into the following groups:

Question:  How do you handle the strength and conditioning program at your school?

When surveying all groups, 47.5 percent of coaches say the head coach (themselves) handles the majority of strength training responsibility.   This was pretty consistent among all our groups- both successful and unsuccessful.  Many programs did not have a separate strength and conditioning coach, the largest group that did was a 20.9 percent response rate from those in Group 1- coaches that have won at least 75 percent of their games over the last three seasons. 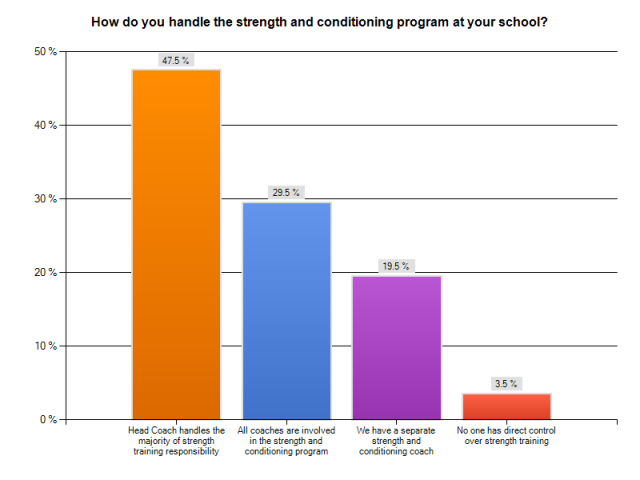 Question:  How many days per week does your team work out during the off-season?

It seems that four days per week seemed to be the majority response-with over 52 percent of coaches from all groups selecting this response.  We did find that 40.7 percent of those coaches that won 25 percent of their games or less over the last three seasons lift three days per week during the off-season (below). 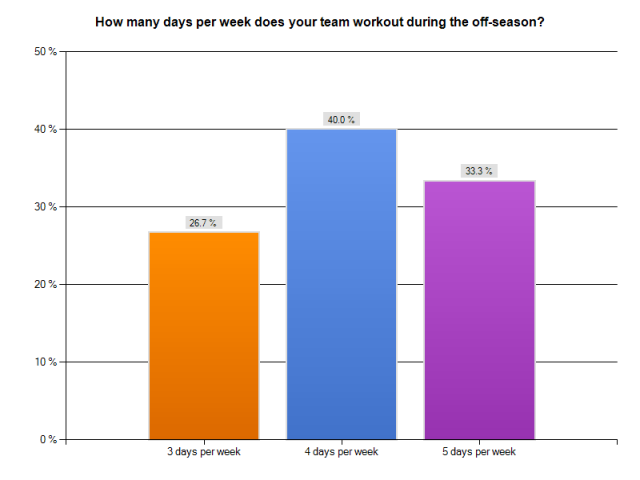 Question:  Do you conduct off-season mat drills in your program?

We defined mat drills as agility or plyometric drills done usually early in the morning to train discipline, speed and agility.  We found that 59.8 percent of all coaches are using a mat drill program while 40.2 are not.  A couple of interesting tidbits here.  Only 60.9 percent of coaches that have won at least six titles conduct mat drills during the off-season.  What was interesting here was that 67 percent of coaches from Groups 2 and 5 (those that have never won a title or won less than 25 percent of its games the last three seasons) do conduct mat drills.  Perhaps, the answer lies in the way in which these mat drills are conducted that equates to success.