Outside a defense's base, fronts and coverages often lie its' blitz packages. At Middletown, we love to call blitzes and let our players be aggressive. We have always liked how the 4-2-5 gives us options on whom to blitz. However, throughout the years, we've found that to consistently execute blitzes correctly, we need to condense the amount our kids have to know. In the past, this has kept the blitzes to just a handful. There were times we knew we needed certain blitzes. Unfortunately, we could not install them because it would become a mental overload for our players who were already having to learn our team's offensive plays. Our blitz system was one of rote memorization for all eleven players on the field. Although we were having some success, we knew we could make this part of our defense better if we found a better way to coach and teach. As a defensive staff, it became our mission to find a way to expand our blitz package while keeping it simple enough for our players to continue to play as fast as they do in our base package.

Through talking to various defensive coaches and learning about their methodologies for simplifying and teaching good defense, we believe we developed a blitz system that finally allows all eleven players to play fast. They can play fast because they do not have to think much about their alignment, assignments, and responsibilities. By creating a sound conceptual blitzing system, teaching the players the “why”, eliminating what if’s, and tweaking how we practice, we have been able to create a lot of headaches for opposing offenses.

To establish a fast timeline for teaching, learning, and building repetition; there are four main components to our zone-blitz system. Implementing these components eliminates a lot of pre-snap and post-snap thinking for our players while also providing them an easy gap sound structure within which to play.

Many defenses can blitz without matching their front and secondary calls. Their players can digest how a base blitz call might change depending on offensive personnel, formation, etc. In our experience, it has been an "expensive" proposition for us to teach our players the various what if's offenses can create for blitzes. We, or more so, I have not been able to find a simple way to teach these types of variables effectively with the number of players we have playing both offense and defense while also staying multiple on defense. We’ve also found that if players are thinking too much pre-snap, this inevitably slows them down post-snap. To combat these issues, we’ve married our front and secondary strength calls in our zone blitz package so that the players know which positions are on their side of the ball. 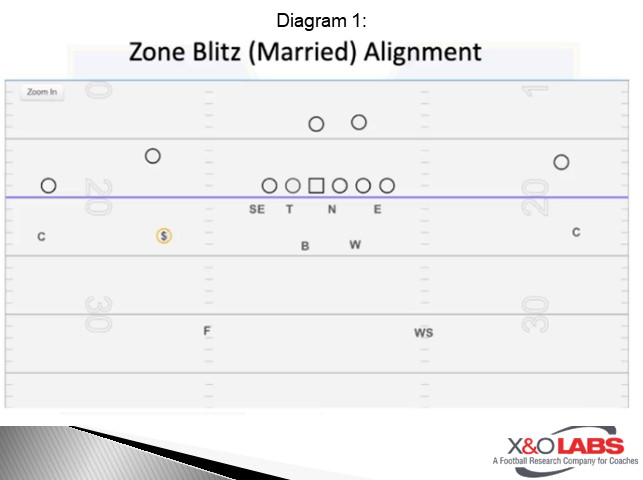 In a married defense, our 3-tech tackle, Strong End, Mike, The overhang Backer, and Free Safety are all on the same side of the football. To the weak side are our shade nose, weak end, weak inside linebacker, and weak safety. By having a familiarity with who is on your side of the football, our players have very little to think about pre-snap once the blitz call is in. They’ll know their assignment, whose blitzing, where they are blitzing, where they are rotating, in large part to the defense having a definitive strong and weak side.

The coverage behind a zone blitz can also be an "expensive" proposition. Whether it be a check system between 3 deep 3 under or 2 deep 4 under based on formation, or Dick LeBeau's match carry deliver coverage concepts, it is easy to make the coverage aspect of the zone blitz system time and rep consuming for high school players. Although these mentioned concepts have a ton of value and have shown to be highly effective, we have decided to stick with simple alignment and assignment rules that allow our kids to gain confidence and play fast within our blitzes almost immediately. 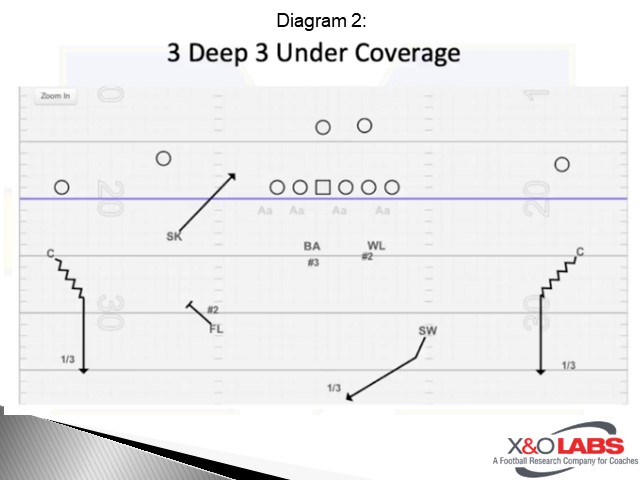 We will start in a cover 2 shell. Assignments may vary for the safeties depending on where they are rotating, however, for our overhang and two inside backers, the assignments are very simple.  For Safeties: If the defensive player you’re married to blitzes, you replace them in the underneath part of the coverage. If they don’t blitz, you’re rotating to the deep middle 1/3rd. For the overhang and weakside inside linebacker: If you don’t blitz, you are a #2 drop. For the Mike: If you don’t blitz, you are the #3 drop.

Middle 1/3rd: (Either Free or Weak Safety) Show Cover 2: Work to Middle of Formation getting run/pass read from the cluing ball up/down from QB

#3 Drop: vs Pass – Disrupt inside pad of #3; Match the vertical of 3 and make them throw over your head vs Run – Inside out on the football

To reduce thinking for our players, we will call the position name of the player we want to blitz. The names are: 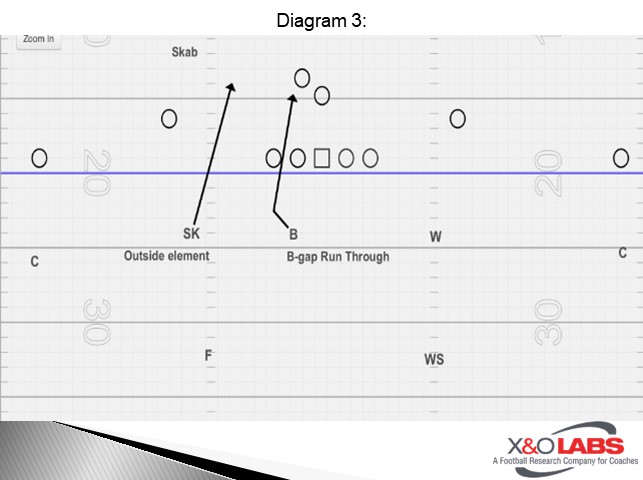 Again, to reduce the thinking for our players in our single blitzer package, we will name the offensive gaps at the line of scrimmage. We do this to tell our blitzer which gap they are to blitz through. It is a very elementary concept but it has quickened the learning curve for our kids and allowed us to be able to teach how to blitz, how to cover and install other defenses at a much more efficient and deeper level. 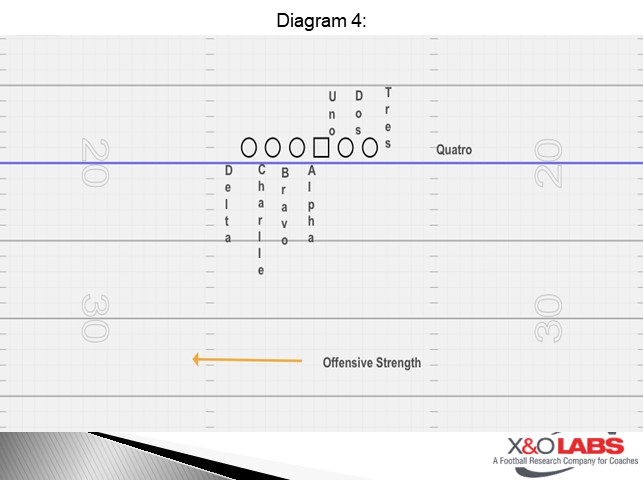 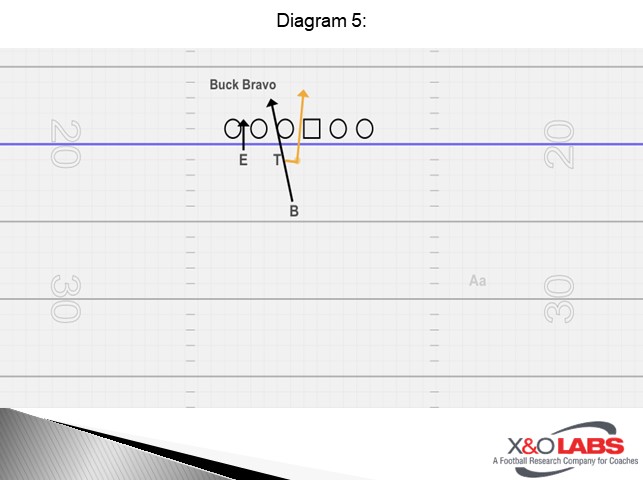 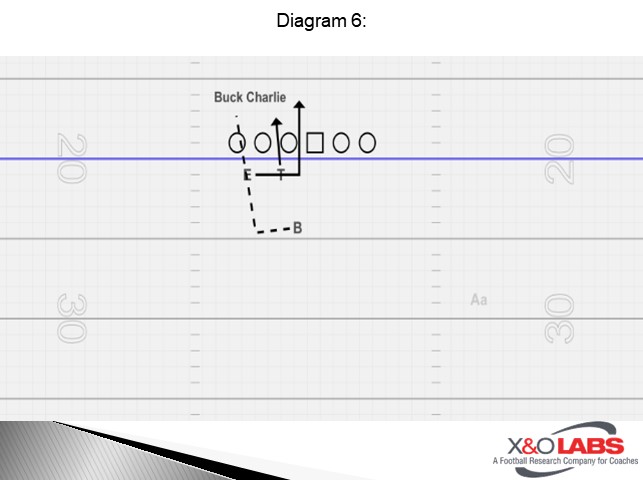