Ferris State University is a division two football program in western Michigan. We do not have the bells and whistles of other programs. We do not have the same staff size as other schools, so there have been times where I have the offensive line, tight ends, and even running backs by myself. So, out of necessity, I had to learn and teach multiple positions at the same time.

The product of that challenge became an efficient way to train offensive linemen. Streamlining block types and techniques allowed our unit to get a full day of individual work done in ten minutes. It forced me as a coach to trim the fat on our technique, and make it simpler. This allowed players to learn faster and make an impact sooner.

Best of all, I now could have my best five on the field regardless of position. For example, we went into the playoffs, and I moved one of our starting tackles to guard because of a matchup and it was the best offensive line we fielded. 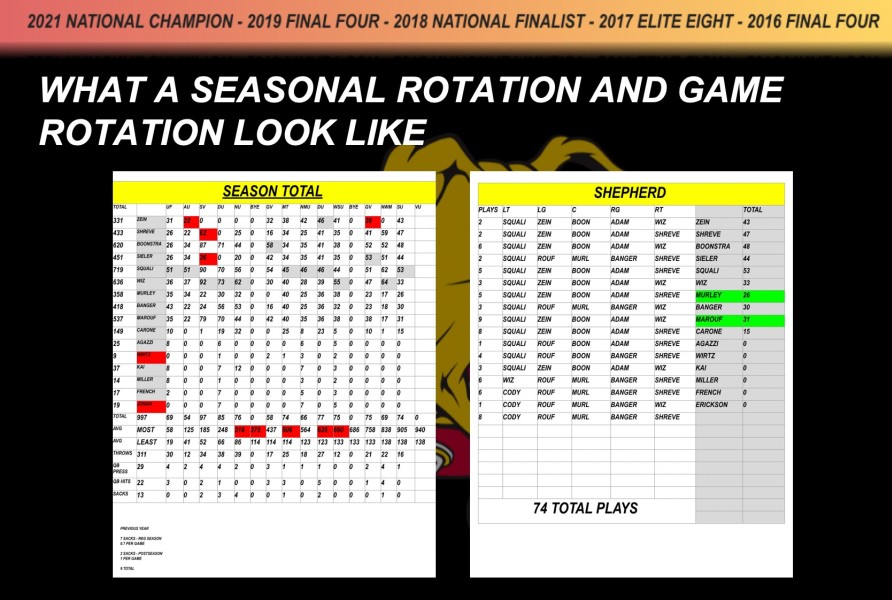 I’ve found this plan is accomplished using a five-step method:

The Pre-Requisite: Identifying what you Got, Want and Need:

It’s important to training multiple positions for offensive line to make these identifications. You must look at the system you run, and how you can benefit the team. Always must be honest with yourself, staff, and players with the following: where you’re at, where you want to be, and where you need to be. If you had all the resources and support you could ever dream of, what would you look like? What do you need? This here is the most important, because it is the very line drawn in the sand to determine a win from a loss. What does your unit need to function? Those needs must be met in order to not only win games, but to develop multi positional offensive linemen. It will also streamline and personalize your individual and practice time.

At Ferris State, we are an up tempo, no huddle, multi-personnel, multi-formational operation that relies on motion, defender reads and mis-directions to manipulate defenses. Because of this style of offense, we do not want to waste time in making identification calls or pointing out defenders. We also find a lot of teams like movements and blitzes against our offense.

The unpredictable movements of the defense and the pace we practice at allows us to have periods where we’re on air and its applicable.

Because of this, we are committed solely to “spot” blocking all of our run schemes. We talk more about landmarks then defenders. There will always be defenders in locations, and if they are not there we are scoring a touchdown. We don’t talk much about LB’s -they have enough problems with defending RPO’s from sideline to sideline and being consistent tacklers in the box. So, we don’t care about where they are pre-snap we care about where they line up. At the end of the day they have to defend six gaps.

Using spot blocking is tremendous for the players. It is not coach friendly. It is player friendly. Especially if you are asking players to move to multiple spots on the offensive line. It is a universal language that everyone can speak. Terminology is the same for center, guard, tackle. There are small details for each position, but the bulk 85% is transferable.

Using spot blocking, you will not have to worry about a player’s capacity to only know left guard or right tackle. All five players will know exactly what the other one is doing. They will operate as one. In turn, because they know what everyone is doing due to the simplicity of the system, the game will slow down!

“Call Side” vs. “Run Side” Methodology:

In order to understand how we teach spot blocking, it’s important to know that our entire call system offensively is based on two divides: a “call” side and a “run” side. For us, it’s difficult to have front side vs. back side (as most offenses do) because we read the backside of G/T counter but we read the front side of veer so it can be confusing to the offensive line.

For example, the quarterback in our scheme will get to LOS and will say “zone right” which is backwards than anyone else in the county because when we say zone right, the offensive line is blocking left. The quarterback is identifying who he reading. Zone right means the QB is reading the C gap defender on the right. That makes it the call side. The run side is where the ball side can crease. Essentially, our system is fit for the QB- whatever is easiest for him. Everyone else adjusts. We needed a unique way to teach it to those guys.

In all of our run concepts, we separate the second level into the following divides: 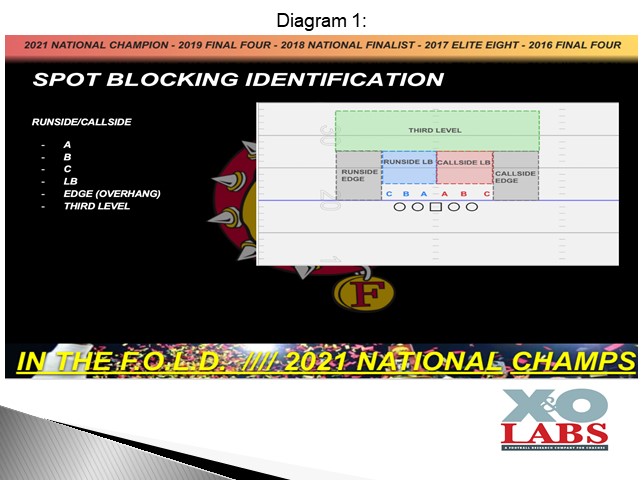 In everything we do, we work the A gap out. We treat the A gaps and B gaps the same way on every play. That way we can protect the QB from any downhill actions. Then we concentrate on C gaps. So, whatever games defenders play on the interior we have a focus on it and we work our way out. The only times our OL calls out things when we have two C gap defenders. Then we let our guys know that there is a blitz or stunt coming. If we talked every time someone came into the box it would halt our tempo. It’s really difficult to be a tempo team and to do motion and shifts. That is a lot for an offensive line to decipher.

The defenses we play are not stable or stagnant. In fact, only 30% of plays defenses are in base alignments like 4-3 or 3-2 or 3-3 looks. The rest of the time it’s goofy fronts and movements, so you waste time working on blocking those stagnant fronts that you never see in during game week. Our offensive line is responsible for seeing what it in front of them, what is behind them and who is on the edge. Essentially, I teach my offensive lineman to look at three things: is there an edge defender, a B gap defender or a C gap defender? If there is a C gap defender and an edge defender chances are the C gap defender is going inside. We are able to make predictions by looking at glances. 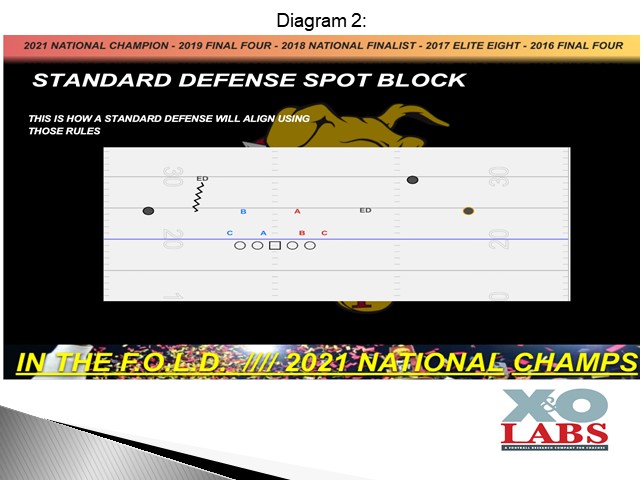 Start teaching your schemes with six defenders on the line of scrimmage in each gap. Then move two or three of the defenders back to linebacker alignment. Then add your most common stunts, and blitzes in between base alignments. You will find details that will help your guys be protected and safe. We have plenty at Ferris State that support our scheme, and should never slow us down. 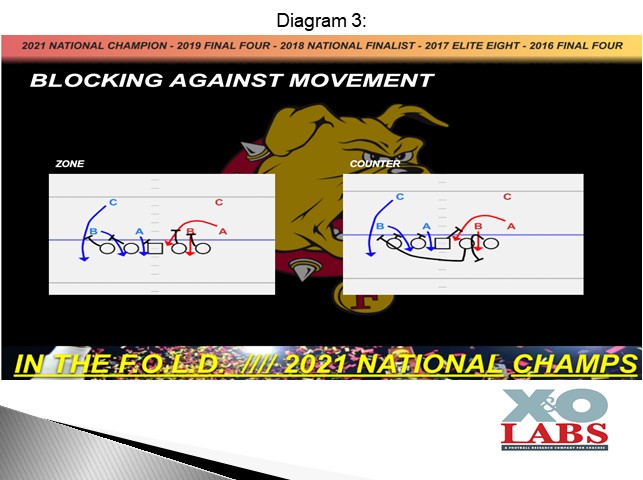