Grading the defensive player targeted on each play started as a way for me to grade our defensive backs in Skelly and 1 on 1 periods during our Spring practice.  I would simply put the player’s number in a Hudl column to keep track if he were playing well or not.  I was able to go back and make a playlist for every player.  At the end of the Spring, I met with each player and had real information on what they did well and what they needed to improve on. The player then also could go back and easily watch every clip.  We took the idea into the season because I was tired of the traditional grade scale where a DB might grade out at a 90%, but the three times he got targeted, resulted in touchdowns.

What I quickly found was that it provided me other great ideas I could use along with this concept. We started to grade every targeted player on both run and pass plays.  We ran reports to see who was the most efficient. We created an in and out of position aspect to the system.  We will use this data as a performance grade. We want you to be correctly aligned every snap. If you are in the right spots, but not making plays, the coach needs to change what he is asking that player to do or find a new player to get the job done.

Grading every targeted player is an easy process. I will start with how I grade pass plays.  If you are playing a man concept it is the man defender who was targeted.  If you are playing a zone concept, it is whatever players' job it was to be in that zone.  Any sack we will give credit to that defensive player that got the sack.  If the ball is thrown out of bounds because someone was chasing the quarterback, we give credit to that defensive lineman. If it is a bad call as a coach, I take the blame for the call.  If I am listed on the target sheet too many times, then I need to look at the calls I am making. On run plays, it is the defender whose job it was to make the play based on your defensive scheme. If a guy misses an assignment that creates a big hole in the run game, we will give blame to the player who blew the assignment. If a player gets a tackle for a loss, we give that player credit.

I would suggest a coach that knows the whole scheme to input this data.  I found in a ten-game season our top guys targeted only have a chance to make a play five to eight times a game. Our top targeted player in the last two years has been under eighty snaps. The good thing for us that player was a 1st team all-conference player and teams averaged under 4 yards a play when he was targeted. Once we have all the players down for a game or season, we run a report and see who got targeted the most and what the yardage was. In the diagram, you see #52 was targeted 73 times all season and gave up 3.4 yards per play.  What I have learned is you want your linebackers under 4 yards per play. You want your defensive lineman under 2 yards per play. You want your defensive backs under 5 yards a play. 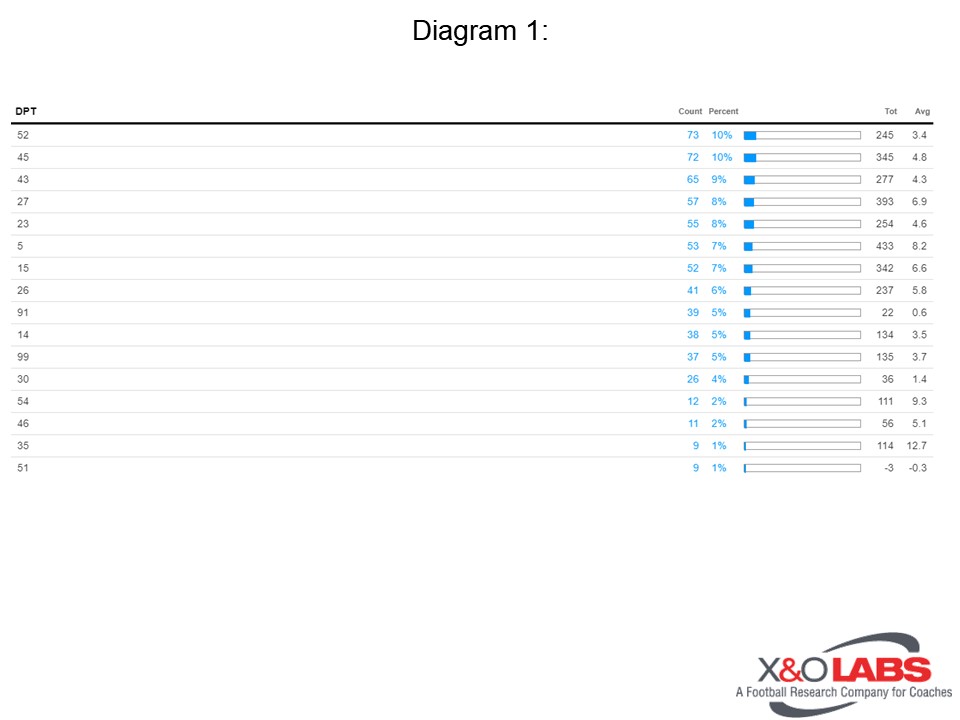