6 Non-Negotiables in Building a Program 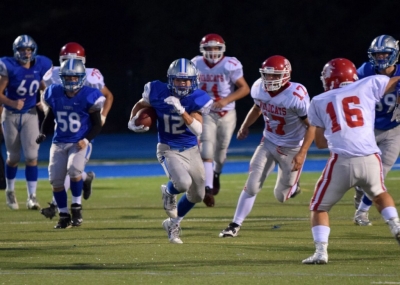 I have had the great fortune to be the head football coach at three separate high schools – Springfield (Delco), W.C. East, and Great Valley. In the first two cases, I took over a football program that had been down for an extended period of time. At Springfield, I took over in 2008. That program had not had a winning season since 1994. In three seasons, we changed a culture by taking the 2010 team to its first playoff run since 1994. I left to take the W.C. East job after that season, but the new head coach, Tom Kline and Chris Britton, were members of our staff and continued a run in the playoffs from 2011-2014. At W.C. East, in the four years previous to my arrival in 2011, W.C. East went 5-38. In 2013, we finished 6-5, the first winning season since 2006. At Great Valley, I was fortunate to take over a program with a history of more success and in our first season, we went 12-2 and won the District I Championship. Here is the blueprint that we implemented at three different schools that has worked successfully at each.

The number one thing that is needed in turning around a program is a clear, well thought out coaching philosophy or mission statement. Having a philosophy will establish the guidelines for your program. All things in the program should evolve from this one idea and should be constantly reinforced throughout the season and off-season. Our mission statement here at Great Valley is…

“To build young men of empathy, integrity, and moral courage who make the world around them a better place.”

All aspects of our program evolve from this idea. At any one point, whether it is in the weight room during the winter or a camp practice, we engage our players and talk with them about these ideas and the overall philosophy. It is not always done with the entire philosophy in mind, but different aspects of it are constantly talked about.

In order to achieve the overall vision of our team, we stress two key characteristics that will ensure that we achieve the overall goal. For our players, the two characteristics that we require of our players are Attitude and Effort. When we discuss these topics with our players, our emphasis is to discuss the importance of attacking anything with the best attitude you can and with your maximum effort. Both of these characteristics are things that any player at any age, from all talent levels is able to give. I was fortunate to play for George Welsh and Gary Tranquil (Offensive Coordinator) at the University of Virginia, and both would always say, “It takes 0% skill to give 100% effort.” There may not be a more appropriate statement when building a football team. These are non-negotiable and will not be ‘coached’. They are a requirement. Most importantly, we always bring attitude and effort back to our overall philosophy – in order to be successful with our mission statement, players must give attitude and effort, and it is not just in football, but also universally. To be a great student or a great musician or a great ________________, the prerequisite for success is having a great attitude and giving maximum effort at all times. Pick the person who is successful in any field – Steve Jobs, Bill Gates, Nick Saban, George Welsh, a players’ parents, etc. – they attacked their jobs relentlessly and with great effort. That is how Apple became Apple and Microsoft became Microsoft.

Having a great mission statement is not the only key aspect to being successful. That in fact is probably the easiest part. The hardest part, over time, is being uncompromising. X’s and O’s clearly play a crucial part, but keeping that vision untarnished and uncompromised is critically important. The discipline required to commit to our mission statement is not easy. Bringing the best attitude and effort every day is hard. It is my job as the head coach and my assistants’ job with their respective players to make sure that they are getting that attitude and effort each and every day. When players are not, we push them to be better. Clearly, every day is not always a good day and discuss that with the team. If it is a bad day, you must work to make it better the next day. However, there are situations where some players cannot make the trip.

From the first team meeting with the players and parents, we establish the vision for our program and discuss these non-negotiable ideals – Attitude and Effort. I am always brutally honest with the parents after discussing our mission statement. It is a hard ideal to live up to and I will work ceaselessly to help the players achieve their individual goals as well as our team goals. But, I demand attitude and effort and when it is not being consistently given at any point during the year, I will choose the success of the team over the individual. Unfortunately, from the moment I took each of my head coaching positions, I told the team and parents that the train had left the station… and unfortunately, not everyone can make the trip. Sometimes, some players are just unable to commit. It is crucial that when you are faced with the critical situation, when a player with immense talent reaches that point, the team must come first. It is not good enough to stand firm with underclassmen that is at best a role player. The test of real leadership comes when you are faced with the challenge of a great player who does not follow. Unfortunately, I have had to lose several players. My first year at W.C. East, two returning starters did not complete camp. My second year, our returning starter at tailback was lost. However, by being consistent through our first two years, we did not have any issues our third year.