I am a first year head coach at a program that is in its third year of existence. When our staff began building our offense we knew that power and power read were going to be the foundation of what we did. By week four, we added counter to the mix and saw some great results. These three plays made up 26% of our offense and we averaged 5.5 yards on power, 5.5 yards on power read and 9.1 yards on counter (13 total touchdowns). In this article, I want to focus on how we used motion to set up these plays and execute them at such a high level.

When installing our offense, I wanted to limit the verbiage that players had to know. It was important to me to find a simple way to communicate motion that allowed us to move players wherever we wanted. Like all good coaches I stole an idea from Keith Grabowski’s book 101+ Pro Style Pistol Offense Plays. The idea is that you label 10 spots on the field and you can tag any player you want and tell them which spot to motion too. 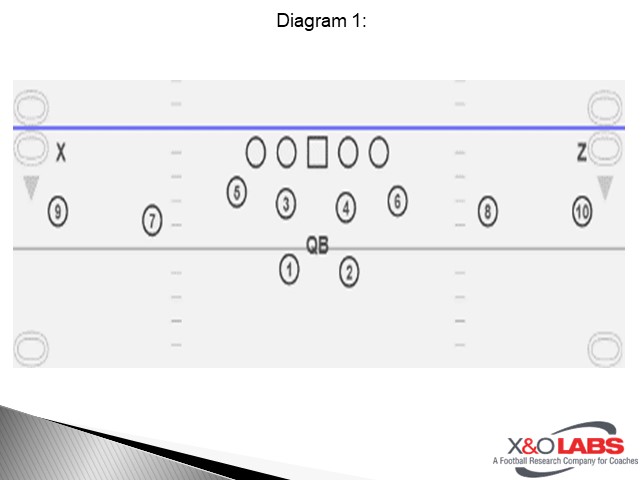 We developed some simple rules for our receivers and our H. The receiver rules state that if you are motioned left to “9” or right to “10,” you know that you are either getting the ball or in the mesh on power read and may get the ball. If you are motioned left to “3” or right to “4,” it means that we are flash faking to you while running another play. Our H was more of a blocker and not someone we wanted to hand the ball to laterally. If the H was motioned to 3 or 4, he knows he is shuffling to that spot and running whatever run play was called. We can also signal two numbers, such as 4-3. In this case, the H will sprint to behind the right guard and then shuffle to behind the left. This allows us to start in any formation and move whatever player we want to where we need them without a lot of new terms or memorization. I simply hand signal the position that was to motion and the number.  We use locations on the body for a number system where pointing at the ground is 1 and tapping the top of your head is 10.

Our motion system allowed us to use all 3 possible ball carriers as threats to run power read. We could get the outside receiver, slot receiver and tailback in the mesh for power read very easily.  The tailback had a simple rule. If I signal a motion such as “W-10,” he knows he is a lead blocker. If I did not signal a motion, he knows he is the ball carrier and should line up accordingly. In the first clip of the video below, we run return motion. We used this sparingly but as a change up for team who would roll to our motion.