Like most offensive systems, the runs being packaged in Austin complement each other. Power is married to pin and pull, divide zone is married to divide zone option, insert zone is married to cutoff zone. The concepts are meant to look the same to the defense, particularly the defensive end that will get a myriad of different visuals when defending this scheme. This means the onus is on the tight end to be the manipulator on these runs and continually execute different blocks based on the play concept.

In this case, we are going to present our research on how tight ends coach Derek Warehime and the offensive staff train the tight end to adjust his footwork, blocking angles and strike points to block both interior and perimeter runs in this system. It starts with understanding the aiming point and landmark needed to execute these blocks.

Inside “V” vs. Outside “V” Aiming Points

Once the identification is determined and ball is snapped, the technique kicks in. We will detail all of the techniques needed to make the blocks the tight end needs to make in this system. But before carrying out the necessary techniques, and underlying premise is the landmark in which these blocks have to be made. These landmarks fall in the realm of two categories: and outside ”V” landmark and an inside “V” landmark. Each play concept requires the tight end to block one of these landmarks:

Inside V Landmark: this means the tight end (blocker) needs to maintain inside out leverage on a defender.

Outside V Landmark: this means the tight end (blocker) needs to maintain outside in leverage on a defender.

Since understanding landmarks is so important in any run game, a great deal of emphasis is placed by Coach Warehime in teaching these tight ends to get to their landmark before making a block.

There is a code word in this system to identify a potential edge pressure that can disrupt the run game. That code word is “rocket.” Again, it’s challenging to spend five minutes within any offensive meeting without hearing that word. It resonates with quarterbacks, offensive linemen and wide receivers alike for good reason: edge pressure can severely fracture any run concept. In fact, the “rocket” adjustment is built into each of the Longhorns play concepts in the playbook. So, not surprisingly a great deal of time is spent on the tight ends not only recognizing a potential rocket, but also on how to block them. For definition sake, a rocket is classified as a defender who is in a speed stance (stagger) creeping down towards the line of scrimmage before the ball is snapped. 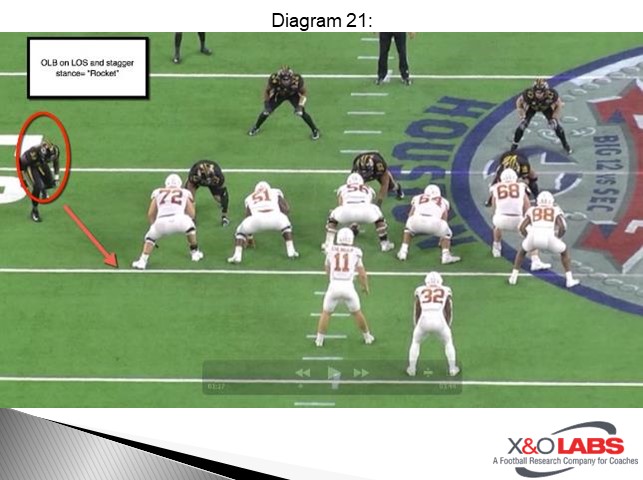 Traditionally, “rocket” in the playbook means he’s on the line of scrimmage or he’s an overhang player. And for the vast majority of the Longhorns schemes, the Y is responsible to block him one way or the other. There are some plays (like speed option which we detail in case three) where he is responsible for a late rocket defender because there are perimeter aspects to those plays. For the most part, off the line of scrimmage is a non-rocket look (Diagram 22). “Whenever that defender is in a stagnant position and not in a speed stance we can usually tell he’s not a potential blitzer,” said Coach Warehime. “But when the Y is moving with action coming out him it gets a little more difficult to determine. It’s a discussion because you get rocket to two-man blocking surfaces more than three-man surfaces because of the shorter edge.” 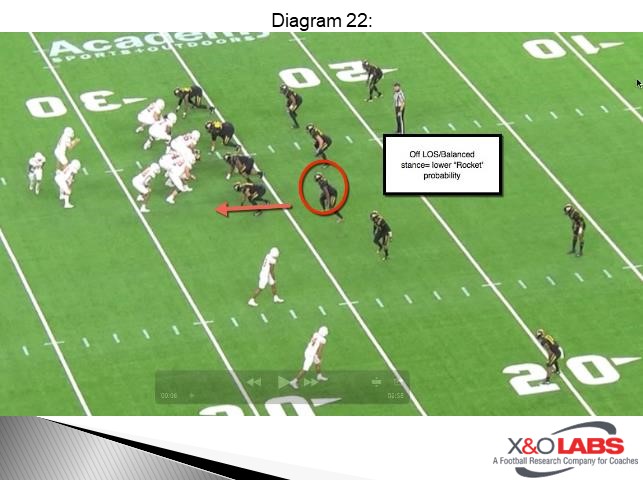 These two calls are also foundations in the Texas run game, which can change the entire blocking progression along the front. These are adjustments to deal with someone on the line of scrimmage that is not the count to the open side. Both push and heavy are also used against pressure to pull off any double team calls and are full zone principles. “Sometimes we need to pull everyone over on the play side track to block the play side rocket,” said Coach Warehime.

“Heavy” Call: The heavy call is a call used against any internal pressure such as double A gap pressure. It’s a “square shouldered” call to get linemen going north and south when double teams are required. It pulls the double teams off.

“Push” Call: This is used against play side pressure that is not in the count. Here, linemen are taught to “track” out to that defender. “That defender is not in our original count,” said Coach Warehime. “So we plus the count out on paper, but we actually track it on the football field.”