According to co-offensive coordinator Tim Beck, part of the reason why Texas is utilizing the Y so much in its run game is to attack the odd fronts synonymous in the Big 12 conference. Aside from Kansas State, the prototypical four down, two high defense, every other program in this conference bases out of a three-down front. This means there are no-open B gaps or A gaps along the line of scrimmage with perimeter support coming from overhang defenders (Diagram 6). So, if you want to run the ball against this spacing, it almost becomes necessary to insert another blocker along the line of scrimmage to create another gap. Of course, that blocker naturally becomes the tight end. 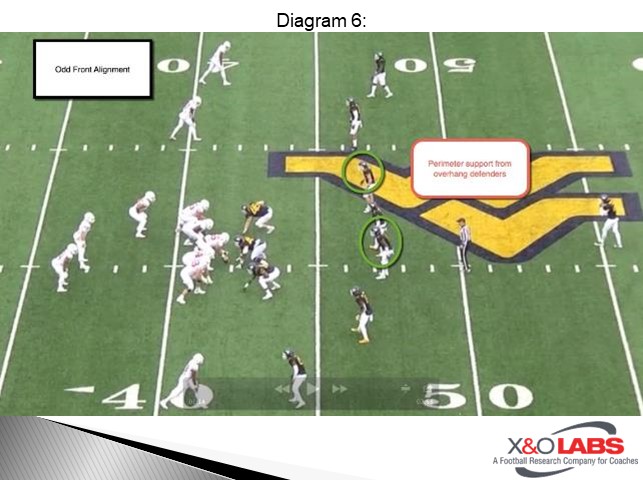 The advantage is that Y can insert anywhere along the front, from C gap to C gap. The downside is that he has to know exactly where to fit based on play concept and he has to be prepared to block any defender, from defensive end, to zero nose to box linebacker. The job description is extremely versatile. In this case we detail the top interior A/B gap runs in this system, what blocks that tight end is expected to make and what techniques he’s taught to make them. We also explain the drill work that is used to teach this technique. First, we segment our research based off the concepts that Coach Herman has prided this offense on since its inception, the A/B gap run game.

If you hang around offensive line coach Herb Hand and tight ends coach Derek Warehime long enough (as we did) you’ll hear two common phrases uttered on the daily. “Get the play started” and “don't pass color.” These are the two most frequent maxims both of these coaches use in teaching their players the run game. In fact, they are written all over the meeting rooms in Austin. We did our best to define them below:

“Get the play started”: This means that there is always one blocker that is asked to generate momentum for the play at the point of attack. It varies based on concept, but basically if this player doesn’t make his block the play is over. An example could be the tight end on the Longhorn’s speed sweep or Maserati concept (which we detail in case three). If he doesn't block the overhang at the point of attack, the play is over.

“Don’t pass color”: This one is a little more obvious. It simply means that blockers cannot pass up a different color jersey (opponent) before carrying out their assignment. This rule trumps whatever responsibility is expected of them on the play call. An example could be the tight end passing up an edge rusher that the pulling guard missed on the play side of the Longhorn’s counter or Fiat concept (which we will detail in case three).

We wanted to know that the tight ends are expected to know as far as box count goes in the run game. Since they are asked to do so many things, we were curious to see if Coach Warehime trains their eyes to scan the box when runs are signaled. As it turns out, there are only a couple items the Y needs to understand and much of it is predicated on the Center identification. The tight ends block in the run game is directly tied to the Center’s ID. In the Longhorns’ system, the Center will verbalize only two types of front identification (Even or Okie) and gesture with this fingers- raising four or three respectively, so the tight end can see them in the commonly crowded venues in the Big 12. His eyes go from the Center to the ID count to the defender he needs to block.

Like most offensive systems, the Center makes his identification count based on two things: whom the combination is working to in the run game and whom the protection is working to in the pass game. But, the identification can change based on the following: run concept, which is carrying the ball and what front the defense presents. For the most part, the Center will identify the play side linebacker in zone runs and the backside linebacker in gap runs (because that is where the combinations are occurring). In the quarterback run game, the identification can be pushed a defender back because the offense can attain an additional blocker to the play side (in the form of the running back). The Longhorns will use both a teen identification (runs that start with “1”) and a deuce identification (runs that start with “2”) to alert the Center on which he should use.

In order to keep things consistent vs. odd fronts, the Center will identify the backside linebacker in both zone and gap schemes. This is done to keep things consistent for the backside Guard and Tackle whom will be asked to block the ID and the defender past the ID, respectively. The adjusters are the play side blockers. The play side Guard and play side Tackle always double team to one past the identification play side.

Editor’s Note: In each of the diagrams presented in this report, the circled defender indicates the identification of the Center- both for run and pass.

Inside “V” vs. Outside “V” Aiming Points