Variations of The Y-Over Route

Our bubble Y-over (or Y-Cross) concept is a weak side flood much like the original Air Raid 95. This concept gives us both a horizontal and vertical stretch on the defense as well as built in constraints for our quick screen game. Bubble Y-over has been our most productive play for the last three years averaging just over 23 yards per completion.

Our version of the bubble Y-over concept is a full field read and the first passing concept we teach to our young or inexperienced QBs because of the ease of the left to right (“windshield wiper”) progression. The read and footwork often come naturally as we run a lot of perimeter screens and rep quick feet in our Indy sessions daily. The ease of the progression helps our QBs develop their understanding of the system we use at Palmer Ridge. 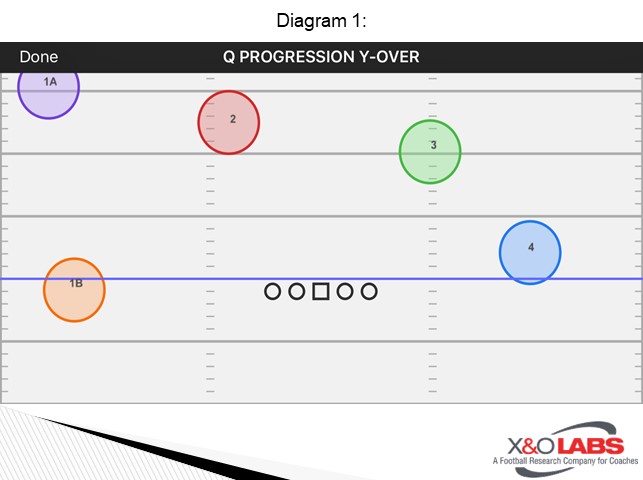 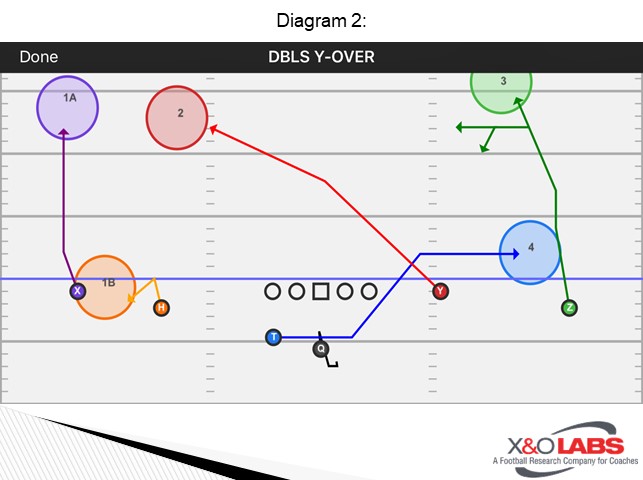 The front-side #1 receiver aligns at the top of the numbers and will run a go route stretching the defense vertically. We want the quickest possible release vs the defensive back in order to help the QB identify post snap coverage as fast as possible.  The go route most often comes open against cover 2 Cloud looks or teams that use trap or Read-2 coverage. Against middle of the field open coverage, we want the go route to pull the front-side FS in order to open up grass for the Y-Cross. We want our front side #1 to anticipate coverage and win by stacking his route once he beats the defender in front of him.

Front Side #2 Receiver Bubble, Arrow, or Out

The inside slot receiver has the flat route to the front side of the concept. We start this concept with a bubble screen but can game plan to use a 6 yard out if we feel that the secondary is keying the #2 receiver in some match quarters concepts or man under looks. The bubble screen does a good job of enticing both the flat defender and the FS to the front side and with movement creating a clear lane to throw the Y-crossing route behind it. At Palmer Ridge, we will also use some split back sets and have the #2 play side receiver push motion out of the backfield or use a Trey set and motion the #2 receiver across the field and run him on an arrow route to help identify coverage and pick-up easy yards against man coverage. We like to use the flat route from #2 as eye candy to entice the secondary.