Most coaches will argue that in press coverage, the feet must move before the hands. But where they move is just as important as how they move. Too many times, a corner will put himself out of position by stepping back or stepping away from the receiver. So, to combat this issue Coach Sewell at Bowie State University will use agile bags for his corners to work on their feet before making contact in press technique.

Coach Sewell calls this the No Retreat Press Drill, which works on press technique without retreating. “We’re focusing solely on sliding in the direction where your leverage advantage is without giving ground,” said Coach Sewell, who will use this from press alignment and catch alignment at 5 yards.

Conversely, some corners will develop the bad habit of a forward jab step in playing press technique. According to Coach Moore, if it can’t be fixed with extra study and individual work, he will back the player up a half of a yard and let them play using the false step, like a golfer playing for his/her slice. For example, in the clip below, the corner at the bottom is playing further off than the defender up top because he would always take the false step (Diagram 1). “So instead of playing at the normal depth, we backed him up a half a yard or so he can still take the false step,” said Coach Moore. “We had trouble getting it out of him.” 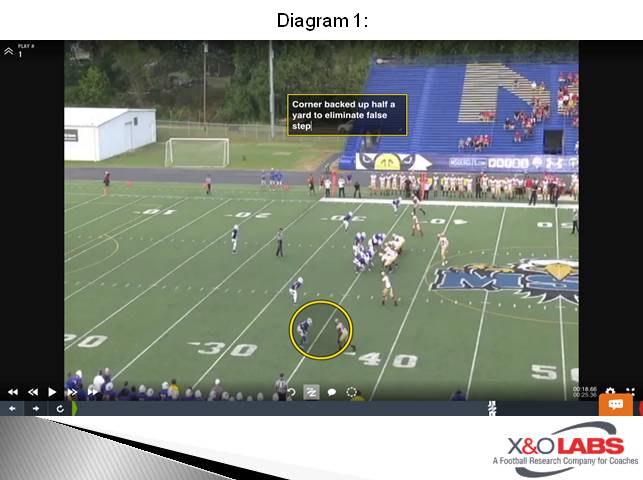 At Southern Arkansas University, former defensive coordinator Josh Lawson, taught a slide technique to play press coverage. But to alleviate players using their hands before their feet, he would make his corners wrap their hands behind their backs. “We would have a receiver holding a dummy and we would cover the receiver without using hands so they had to use their hips and body all the way through the receiver,” Coach Lawson told us. “We don’t backpedal. We don’t think it helps us. So, we over exaggerated how many times we had to slide. So, if I felt like we needed two good slides in our press coverage before we can get our hands on them and open up with them, we would have exaggerated that to four slides. We would slide laterally four times and then punch a bag to open our hips. We over exaggerated their feet a lot.

Aside from taking false steps, some corners have issues with stopping their feet in press coverage as well. How Mac Alexander, the defensive backs coach at Colorado Mesa University alleviates this issue is by using what he calls his “motor technique.” He will start his drill work every day for 10 minutes working his motor drill then progress to one-on-one’s. In his motor back technique; the emphasis is keeping the feet shoulder width apart with weight on the balls of their feet. The hands are up ready to punch and in athletic stance with flat back. When wide receiver releases the defensive back moves his feet back quickly gaining six inches with each step, while staying square.

Like many coaches, Coach Alexander will film his individual time of all the man technique. “We show them that ‘yes, you can do this,’ but you just have to focus on what you are doing,” he told us. “Because many times what gets a defensive back in trouble is that when they come press, they don’t have a plan on what they are going to do. So, getting them to think and focus every time they press will really benefit them.”

Once the motor technique is understood from a stagnant position, Coach Alexander now implements the fundamental to simulate when a receiver moves back and forth. It comes in the shape of his Zig Zag Drill.  “As the wide receiver goes back and forth, the defensive back is working his motor literally staying square and inside of the wide receiver,” said Coach Alexander. “The hips do not open and there is no punch.”

Addressing The Eyes and Hands in Catch Technique

As opposed to on the ball corners which use a press technique in man coverage, off the ball safeties or outside linebackers use what is called a “catch” technique with the visual of “catching” receivers and not giving ground, as they get into their routes. So, we asked each contributor to talk about how he is training the eyes and hands of defenders when in catch technique on a number two receiver.

Zack Moore, defensive coordinator, Morehead State University (KY): “At safety, most footwork issues center around two things: giving ground before utilizing ‘catch’ technique and giving up leverage due to breakdowns in their footwork.  We combat these issues by teaching our safeties to play on a cliff, understanding they cannot give vertical ground prior to making contact with the receiver. We also teach them to understanding how teams may attack our coverage helps the player understand not only what routes they’ll see, but why. Therefore, understanding why they must keep leverage. The technique correction is usually their failure to stay square and mirror lateral movement by the receiver. Correction may be as simple as re-teaching or may call for intervention by means of an alternative drill or approach.

If a player is in man coverage, we do not teach them to read the QB. They can be taught, dependent on the opponent, what routes to expect from various splits, field positions, different players and situations. Also, knowledge of what the weaknesses of the coverage may be and how offenses tend to attack the coverage should give them a good idea of how they’ll be challenged. For example, if we are outside leverage on a slot receiver, we know that slants and inside fades will be on the menu for whatever offense we are playing that particular week. RPO always adds to the challenge of defending, but this is also a big reason why we choose to utilize cover 1.  The back set is often a good indicator of whether you will be on the passing side of RPO. As mentioned above, this, as well as other pre-snap indicators, can help the player anticipate or be prepared for certain routes.