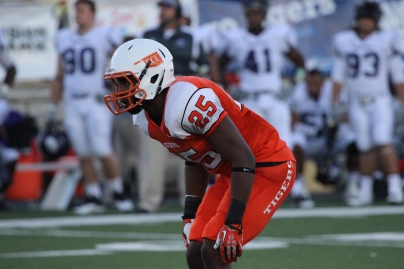 Red zone coverage has its challenges regardless of the coverage technique you use, but after I reviewed our 2012 tape, I was sure that we needed to go back to the drawing board.  I was tired of seeing DB?s get beat on the fade and back shoulder time and time again.  So I asked a variety of offensive coaches what makes things difficult for them in the red zone and their answers were rather consistent.  They said that they struggle with DB?s that sit back and are slow to turn on the receiver?s movement.  They went on to explain that by sitting just past the depth that they like to cut and collisioning the receivers at the point of the cut their timing was impacted and the success rate dropped.

This all brought me to the catch technique, which for us means standing 8-9 yards off the receiver flat footed and ready to collision and react to the receiver as he makes his break.  This forced the receivers to change the way they ran their routes and forced the quarterbacks to wait an additional second before releasing the ball.  We put the concept in early in the year for it?s red zone effectiveness, but we found that as the season went on we had more and more success with it in the field as well.  In the end, we saw far fewer fades because of this concept and we also found that our new alignment positioned us even better to react and attack the underneath concepts like the slants and out routes.

The simplest understanding of catch man is that the DB works to stay put and the receiver would likely make his break in front of the defender between 7-10 yards. If receiver runs a vertical route, the DB will shuffle/slide feet, collision, turn & run. When the DB has more confidence, his pre-snap cushion can be shortened.   We teach our DB?s that by just aligning in the path of a receiver?s stem, they already re-routed the receiver.  Either the receiver runs over the defender, not running his route or he is forced to make his break early, declaring how the DB will play the route.   Here is a breakdown of the coaching points for this technique as it applies to different aspects of its execution: 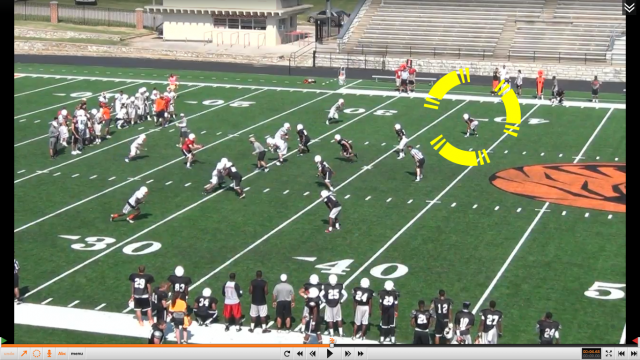