Developing In-and-Out of Pocket Presence for Your Quarterback 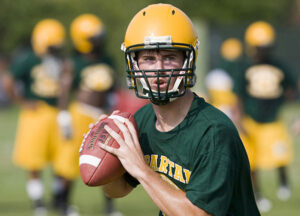 We’ve reached the "crunch time" of the season. That daily grind where one or two games might decipher whether you’re playing in games that count in the early winter months or you’ll be putting together your off-season program workout program earlier than expected.

So at X&O Labs, we thought what better time than now to prepare the most important player on your roster, your quarterback, for the challenges that lie ahead the next few weeks.

This week, we’ve been given access to how the staff at Norfolk State University (VA) trains their quarterback during the season.  Steve Canter, the quarterback coach for the Spartans, contributed his every day drills that he uses to develop his signal caller.  These are the core techniques and corresponding drill work that Canter uses to emphasize productivity in the following areas:

Steve Canter, an X&O Labs email subscriber and former graduate assistant at FBS power Virginia Tech University, has led the Spartans to a 6-1 record (as of 10/17/2011) with an offense that has been averaging over 400 yards per game.  We all know that the key to a successful pass offense is training the quarterback to be decisive.  How coaches train their quarterback’s to be decisive is by executing drills on a daily basis that emphasize in pocket movement, out of pocket movement and most importantly having ball security.  Having only given up four sacks this entire season, Norfolk State has shown these drills are a proven commodity.