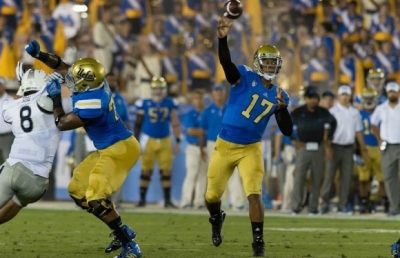 When we first began conducting research on Quarterback development, we cast our net wide.  We wanted to explore every component of the position:  exchanges, drops, read progressions, throwing mechanics, etc.  What we quickly found is that it be difficult to write volumes on this topic, much less a 10,000-word research report like XandOLabs.com is accustomed to doing.  So we decided to subscribe to the “addition by subtraction” methodology by simply honing in our research on what a QB does at the top of his drop.  How he gets there is one thing- now what does he do when chaos ensues, and whatever well organized scheme or plan flies by the waste side.  Many coaches have told us that the easier part of a QB’s footwork progression is the drop, the most difficult is teaching him to move with the ball post-snap.

In many ways, the drop is the simplest part of the pass play from a fundamental standpoint.  The answers are straight forward.  While coaches may teach different drops, what a Quarterback does at the top of his drop is essential.  The variables that exist are all determined by the play call and the situation.  But that all changes the second the Quarterback plants his dominant foot and works toward the line of scrimmage to throw the football.  At that moment all of the variables that defenses bring come into play.  It is that moment where a QB’s ability to execute his footwork under pressure will determine his long-term success at the position.  In this case, we will look at how coaches are teaching proper footwork through their route progressions from the last step of their drop to the end of a scramble.

Before we begin with the footwork mechanics, it all starts with a solid base, or what Tommy Zeigler, offensive coordinator, Scottsdale Community College, calls his power position.  This is what he told us below:

The Power Position: I relate the power position to a golf stance.  Feet are usually more than shoulder width apart, weight evenly distributed on the inside part of your feet, front foot/toe NEVER pointed at the target.

We coach our QBs that every throw should be the same and that starts with the "power position" or their base.  The way we come to find the "power position" is by finding where their stride takes them.  I don't teach a stride so where their body takes them is where we start.  Once we find the base we will use for each individual QB we take a ton of time becoming comfortable in that position.  We make every throw from the same position stressing the hip turn and follow through. 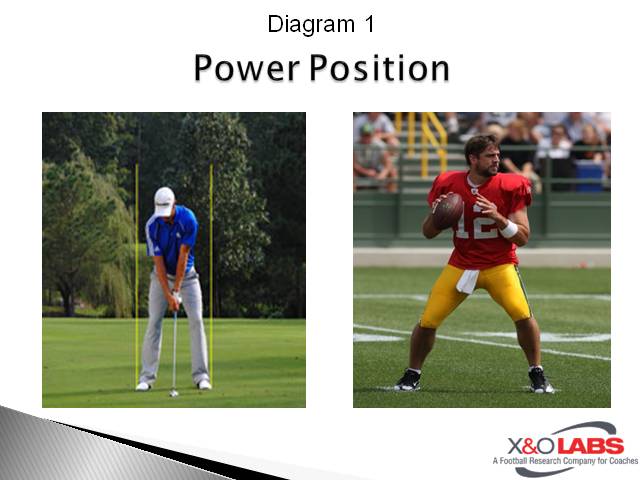 I teach it this way to cut out on wasted movement and erratic footwork.  Also, by having no stride in our throws we’re less likely to be inconsistent with when, where and how your front foot hits the ground…because it’s already there.  Lastly, by taking away the stride you are less likely to “over stride” point your toe and lock out the front knee thus negating your full hip potential. 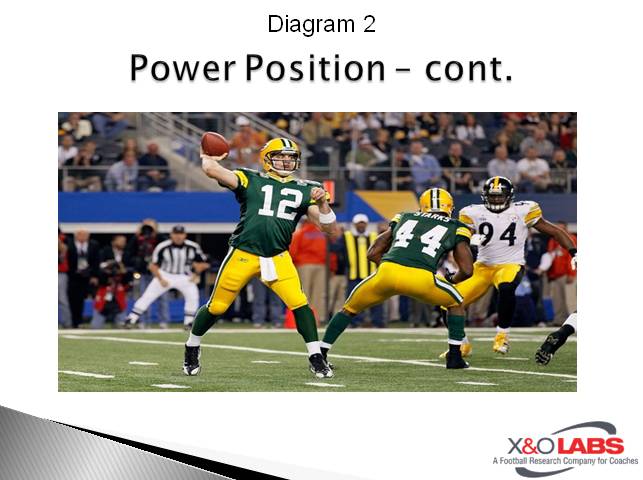 One of the more prominent drills that Ziegler does to teach the power position is what he calls the “Manning Drill” which can is explained in his words below:

The emphasis is to keep our QBs in their power position.  Knees bent, elbows relaxed, eyes down field as they work the bags.  First time through is typically done without a throw.  After going once or twice each way I incorporate a throw.

As the QB navigates the bags in his power position I will then randomly clap at which time the QB will make a throw to a WR 10 yards down the field working within the framework of the bags.  The emphasis here is still eyes downfield, relaxed elbows and bent knees...incorporating the throw I talk to the QBs about less being more.  I want them keeping their feet active but close to the ground at all times, never on their toes, never feet close together.  By staying in the power position they can set their feet and make a throw will no time lost and with power and accuracy.