The Mid Zone Mindset for the Play Side Tackle

The Mid zone concept- the offspring of the inside zone and outside zone family may be the most ideal boundary run scheme to two-man surfaces. It’s the preferred run of choice against any front- 4-3, 4-2-5, 3-man fronts- and against any coverage look. It can also be run from under center, shotgun, offset or pistol alignments. It can also be tagged with RPO’s, PAP’s or bootlegs to make the play much harder to defend.

But if you’re running mid zone in your system, you already know that. And if you’re not running mid-zone, you probably need to. Yet it’s important to note that the mid zone may not always be an effective play. The sources we talked to continually referenced the necessity of the back to understand the timing of the play. There’s more fitness to it than inside zone, and you don’t have the “circle the defense” mindset as you would in wide zone schemes. The back must blend the perfect mix of vision and speed in order to get the play right.

The ball carrier aiming point is the inside heel of the play side Tackle, which is a universal aiming point to two-man surfaces. Most prefer the same aiming point in pin and pull schemes as well. The back is taught the bang, bend, bounce methodology.  He will press and read shoulder tilt of play side Tackle. If his shoulders are parallel, he continues on his path and reads the next down defender. If any doubt in his mind, he sticks his foot to go north.

Marian offensive line coach Greg Whalen calls it the “flashlight” in the butt of the play side Tackle. “We tell him to run to that light,” he said. “We take the edge if it’s there, otherwise we need to read it back.” He’s gone to using more of a Pistol mesh because the drop step puts the ball carrier directly on the right path. In Pistol, the aiming point is pushed wider to the butt of the tight end or ghost tight end to two man surface. Now, the quarterback sprints to the mesh like he would on outside zone. “We want QB to get there easily so blocks can develop,” said Coach Whalen. “It helps because you can get behind a penetrating B gap defender in Pistol. You have more space that way. It puts him in right track and slows him down to let blocks develop.”

Quite frankly, a lot of responsibility is placed on the play side Tackle, which is why some mid-zone majors, like the outfit at Trinity College (CT), prefers to use a boundary and field tackle putting their better mid zone technician to the play side.   At the University of Marian (IN), the concept is called Minnesota/Gopher for a reason. Modeled after the success that the University of Minnesota has had utilizing the scheme, the Mid-Zone run play is a staple in Marian’s system- helping produce over 190 yards per game on the ground this season. 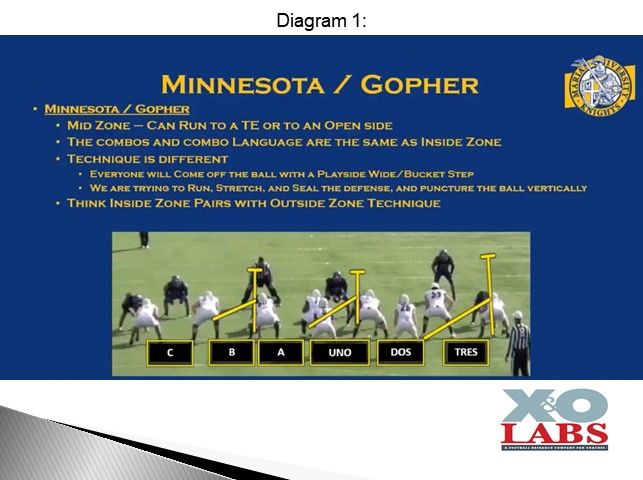 In its base form, the Mid Zone concept is best utilized to a two man surface, putting the play side Tackle on an island to handle the C gap defender down defender. The play side Guard and Center work in combination to block the second down defender and play side linebacker, or one past the point. 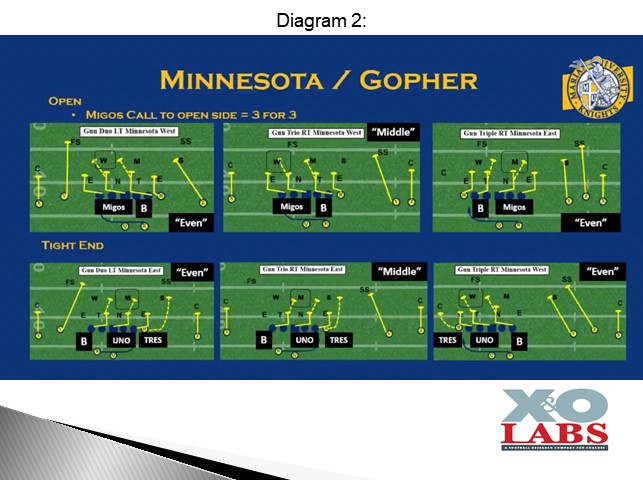 While it’s often used as an open side concept, the staff at Marian has more success running it to an artificial three-man surface from a Y off formation or with a grounded tight end. With the Y-off formation, the tight end is responsible for “plus two” past the point. In this concept, the Y needs to clear the running lane and define the entry point for the running back. Coach Whalen calls the tight end the fixer. “You have a pre-snap assignment,” he said. “But if anyone crosses your face before your assignment, you take him.” 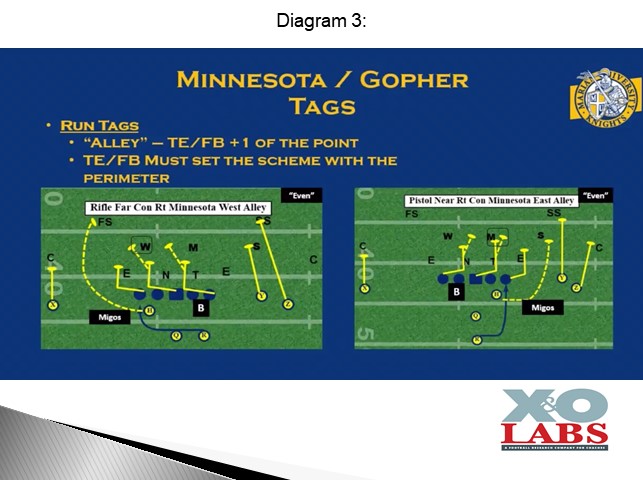 Against four-down structures, the benefit of having the lead back gets him in a position to block a high safety or overhang defender if the boundary corner is locked in man coverage. 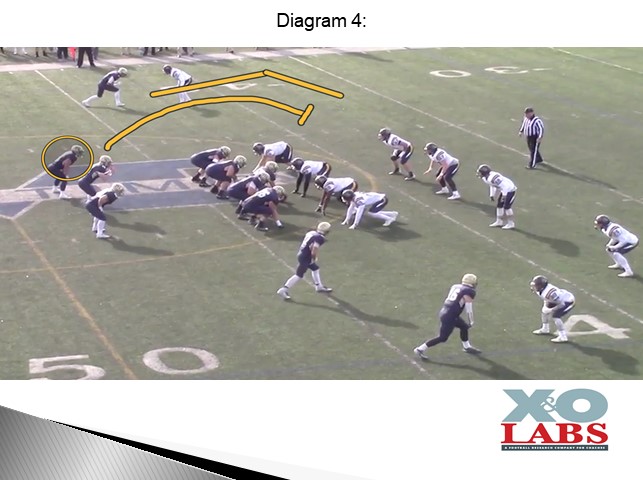