Having followed Coach Jones on Twitter for over five years, I've been privy to seeing the nuggets on offensive line play he distributes daily. So, when I got the opportunity to work with him on this report I was more than thrilled. I had already known of the success UT Martin was having in the run game this season. I studied all their film and was enamored with the success it was having, particularly in their wide zone concept.

During my research, what I found is that there are three main pillars in Coach Jones's teaching methodology of building the wide zone.

They consist of the following:

I've talked with numerous coaches who build their zone play in similar fashions, but it's the clarity in Coach Jones's teaching that made sense to me. His reliance on differentiating surface in his wide zone run game is predicated on the fact that 86% of his explosives in the wide zone runs hit in the front side A or B gap, which as we reported previously is where these plays hit for success. “Our wide zone play doesn’t get to the backside B gap,” he told me. “If we don’t get a gap pried open play side the play is dead. If it winds back, it gives defenses time to chase the ball down.” 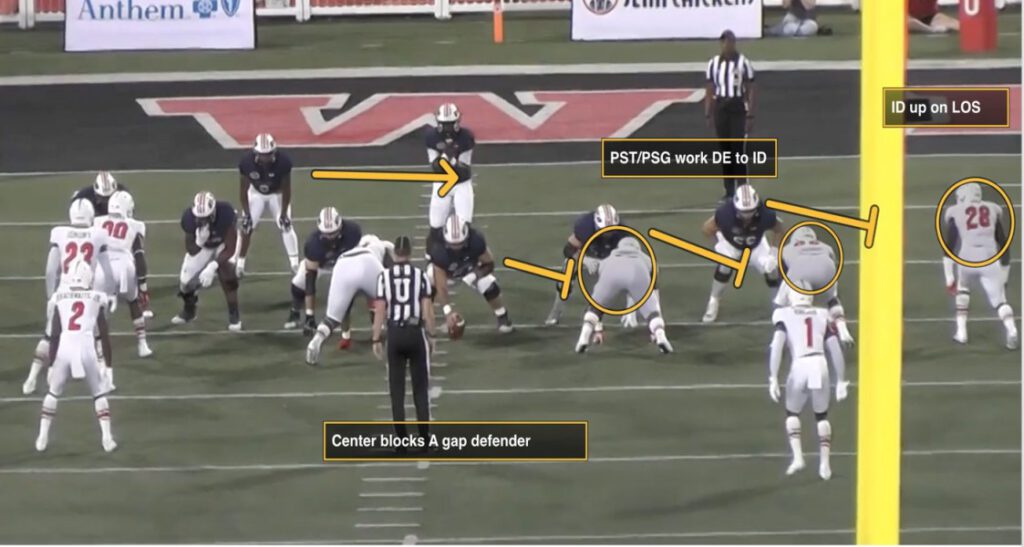 It’s important to note that from day one of install the QB (and offensive line) are taught to understand defensive numbers based on the play side surface. The goal is to never run a good play into a bad look. To do this, the QB is continually given the freedom to check the play into "the right math," as Coach Jones put it. The "math" is in direct correlation to the surface structure. As he admits there is nothing more frustrating than having play-side offensive linemen dominate their responsibility yet the extra hat is the one that made the play. “That’s a coaching problem, not a kid problem,” he said.

Separating the defense is essential to generating explosives in the wide zone and to separate the defense, you need to stretch the play side and cutoff the backside. This comes with what Coach Jones calls "stretch and strain," where there is lateral displacement to stretch the front side with equal hats to block or “strain” the backside. 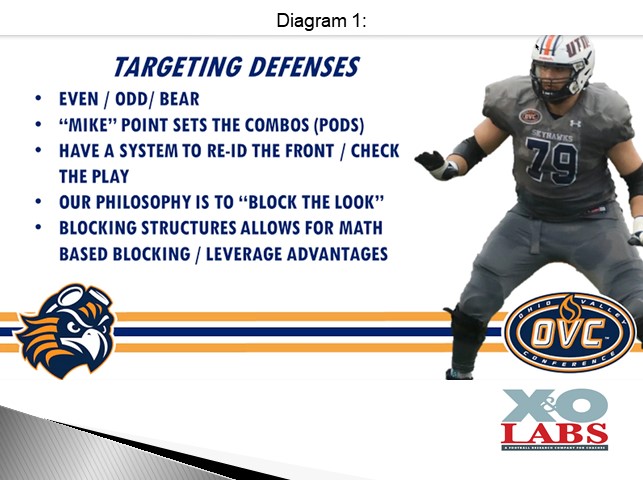 How that is taught is by players understanding numbers advantages based on both the play side and backside of the concept. Coach Jones uses the scenario of cutting the formation in half at the Center’s spot. If the numbers dictate a mathematical advantage, run the play in that direction. By blocking all defenders to the side of the field where the ball is going, you give yourself the greatest chance of explosive runs. If the numbers dictate a disadvantage, well, that is where the controls come into play. 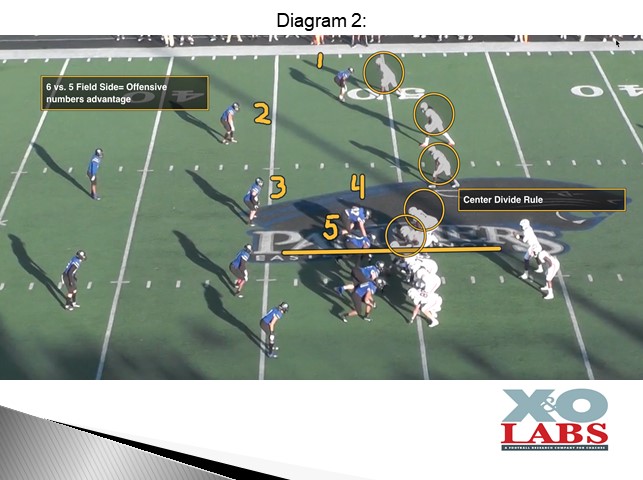 Most outside zone teaching starts at the Center and many coaches may not run the scheme if the Center can't handle the play side A gap. Coach Jones is no different in that regard. The Center is always considered a factor on the front side of the scheme. Even the ball carrier in UT’s system is taught to tempo the play side block of the Center. 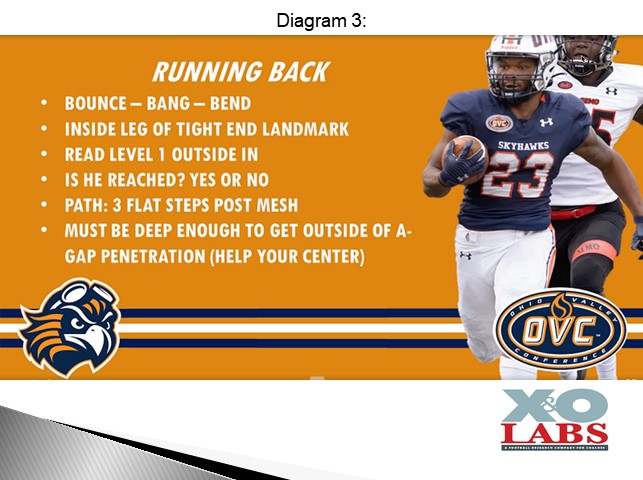 The Center is responsible for making the identification declaration and understanding the possibility to block the box. That comes with teaching him to communicate traditional play side point identifications. More on that as our report continues.  Targeting means being able to block the box without having to push out declarations to perimeter defenders. If this is done correctly, all you need to do is win one gap to the play side and the play pops. This idea of targeting is taught through the understanding of two factors: front-side surface and backside controls. We'll start with the backside first.

Controls are simply how you’re handling the backside of the play. The full flow nature of the wide zone concept lends itself to defenders being able to chase the ball down from the backside. So, how do you keep defenders from doing that? It comes from having the quarterback responsible for a defender in every run. They have a read built-in and that read can vary from the backside A gap, B gap, and C gap. Every time the ball is snapped in the run game, the QB is reading someone. While Coach Jones admits on 90% of the time he's handing the ball off it’s vital that at least one defender gets read to keep the math right. “We have to have answers if they have more than we can block,” said Coach Jones.

These answers come in the form of the following controls: 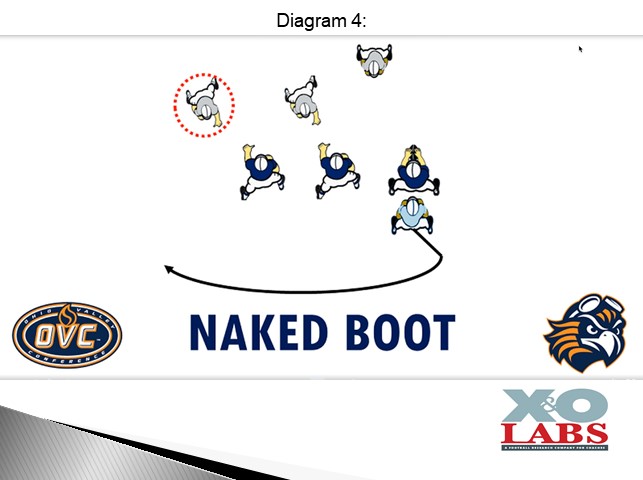 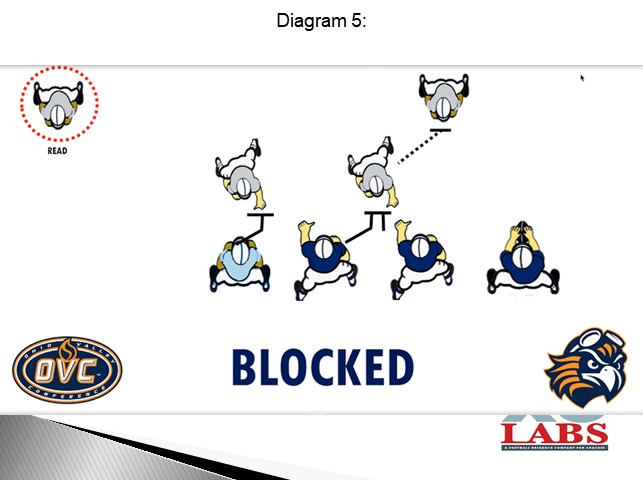 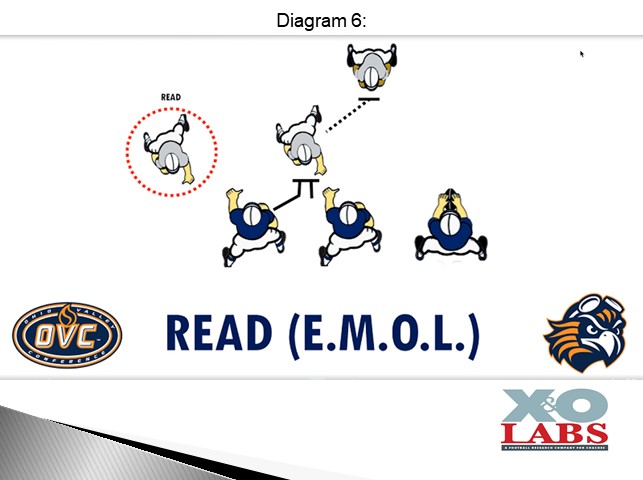 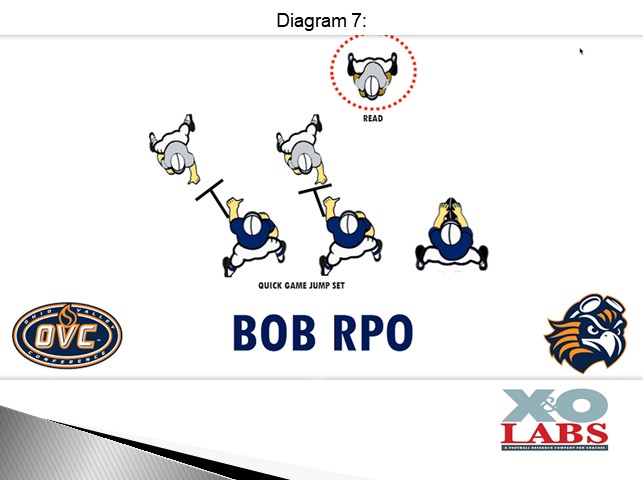 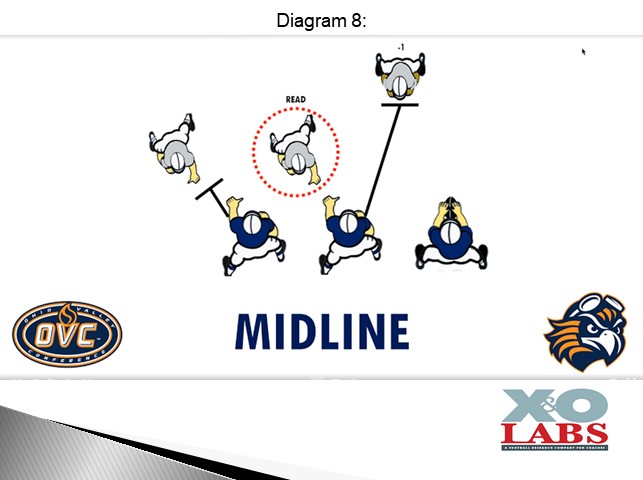 All of these backside controls are built-in by play call communication, which is explained later in the report.

Explanations of Front Side Surfaces:

Open Side Surface- Two-man surface structure, where Center, Guard, and Tackle are allocated to blocking the front side. Here the offensive line can handle three defenders, but not four. 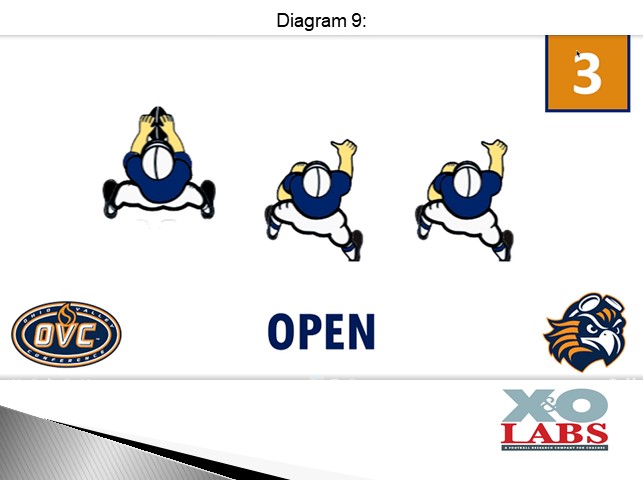 Closed Side Surface- Three-man surface structure where Center, Guard, Tackle, and Tight End are allocated to blocking the front side. Here the offensive line can handle four defenders, but not five. 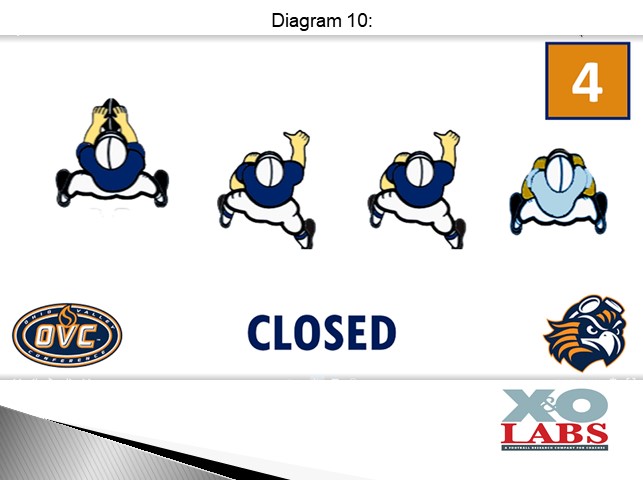 Loaded Side Surface- Four-man surface structure where Center, Guard, Tackle, Tight End, and Y are allocated to blocking the front side. Here the offensive line can handle five defenders, but not six. 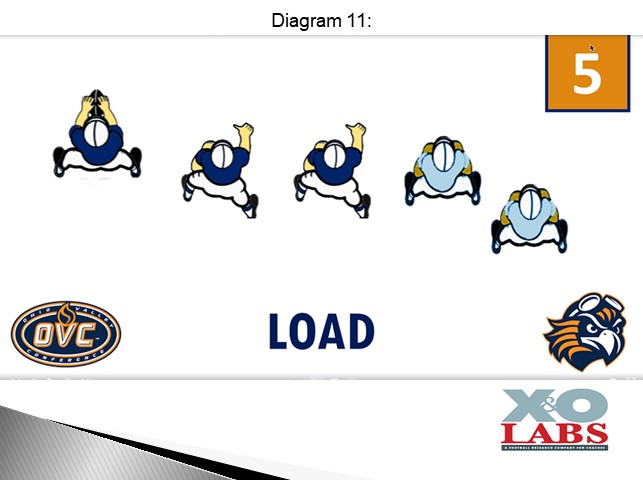 On day one of the wide zone install, Coach Jones and his staff provide specific communication to denote what surface the ball is being run to. The surfaces and controls are automatically built into the play call. Consider the following communication:

“O-Words:”- Any word with an “O” signifies outside zone to the open, or two-surface side. Consider the following:

“Owen”- Open side outside zone from Offset alignments (two-surface backside, auto second level B gap read, which could be a run-run read or RPO)

“C-Words:”- Any word with a “C” signifies outside zone to the closed, or three-surface side. Consider the following:

“E-Words:”- Any word with an "E" signifies that the count needs to be pushed out or go "extra" a defender. This may be needed against back gap defenses or combined with any jet motion away from the play. Consider the following examples:

“Ollie Ernie”- Open side outside zone from offset alignment, where the entire box count needs to work one past the point to account for “extra” defender. 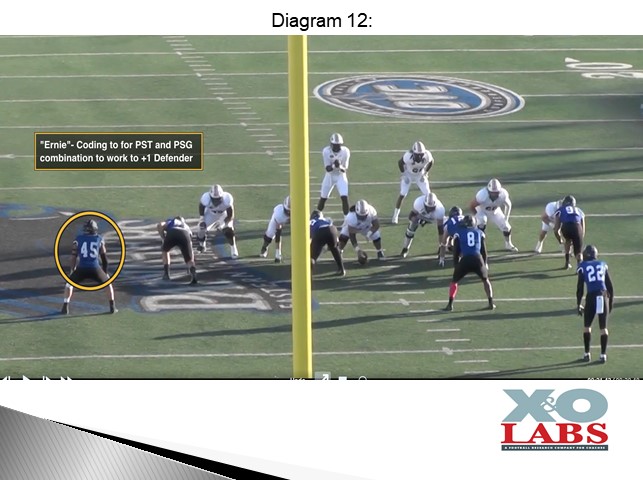 “Chris Ernie”- Closed side outside zone from offset alignment, where the entire box count needs to work one past the point to account for “extra” defender. 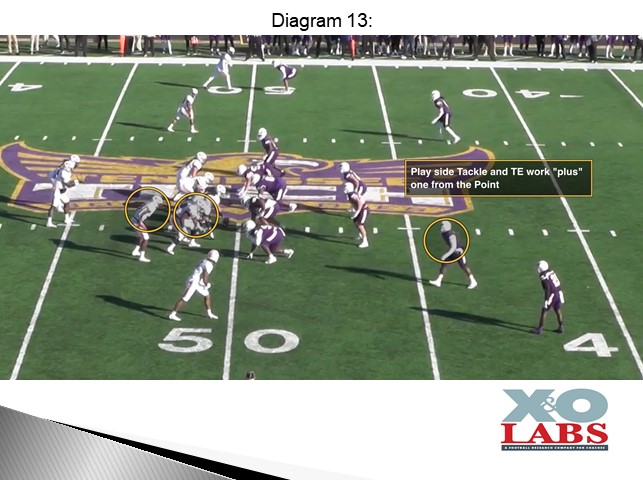 “The picture changes post-snap immediately,” he said. “There is nothing worse than jetting away from the open side with a fourth element and you don't have a blocker there.”

For any “midline” reads where there is an “A or B” gap backside read, consider the following:

According to Coach Jones, having linemen be able to distinguish the surface cuts down on learning time. And once they know the surface, all they need to remember is the control. “We spend more time learning the line calls than the play names,” he told me. “You would know the entire run game with 87 plays in just a little package.”

This teaching methodology is conducive to pre-snap motion as well. Oftentimes, Coach Jones will change the picture by moving the tight end to get a numbers advantage but the offensive line is not aware of it. All they know is whether it's an open, closed, or loaded side run based on the call. The tight end either handles plus one to the point if he is on the play side or needs to be aware of the type of control above if he's on the backside.