In starting our program at Berry College in 2013, we quickly found that developing our offensive line was going to be vital to our success.  In our first two seasons, we were not able to effectively run the ball.  While the schemes we had in place were time tested and traditional, we needed to find ways to help our guys upfront gain an advantage.  Simply stated, doing what I had been doing over the past 20+ years in coaching the offensive line was not going to be enough.  I had to find creative ways to help us improve quickly up front in order to become a successful football team.

We started this process by asking the question, “What would make it easier for our players?”  We started watching film of teams that were successful, trying to study ways to improve.  Through this process, we discovered that using strategic line splitting was something we needed to explore.  We were hopeful that our splitting plan was going to help our guys gain an advantage.

We began maneuvering our splitting in different ways that were not traditional uniformed spacing.  Instead, we adjusted our splitting in ways to give our linemen an advantage of increased blocking angles and technically efficient double teams as well as reducing gaps for penetration by the defense.  As this process evolved, we began to achieve our ultimate goal of finding success in the run game.

Now that we have been using our line splitting rules for three full seasons, we have found many benefits that were not necessarily intended but have aided us greatly.  These benefits include identifying and picking up twisting defenders, seeing line movements pre-snap because of alignments, as well as recognizing blitzes. Additionally, our running backs and QB’s are able to visually see blocking schematics and running lanes before the snap of the ball.

Procedurally, we are a no huddle offense and we practice at a high tempo pace.  Our goal in practice is to get a high volume of reps while coaching with buzz words.  Most of our corrections happen through meeting time and video sessions.  For visual learners, the more interactive we can be with video, the faster they will develop.  Show them how to do it correctly and also show them previous errors and why they are a problem.  What I have learned through coaching in this manner is that our players start to learn the “why” of our splitting, often through their correctible mistakes on film.

I must note that we do a fair amount of walk through coaching.  At Berry, walk through sessions are committed exclusively to assignments, which includes splitting for our OL.  For those that are primarily tactile learners, this is a great way to spend time “doing it” while allowing them a slowed down way work through the process of splitting.

As a general coaching point, we have defined maximum, minimum and over splitting to our players:

We have grouped our splitting into four categories. These are:

We refer to these different splits as BIG Z.  This acronym is a way for our guys to memorize the splitting concepts we use.

In Big splitting, we are trying to take maximum splitting between adjoining offensive linemen. Our goal is to spread the defenders as far as possible from one another increasing the size of the gap or fit they need to defend.  In this particular splitting, defensive alignments do not matter to us as we are only concerned with spreading the run box as wide as possible.

The splitting rules are simplistic.  We are looking to gain between a two to three foot split between the center and the guards as well as the guards and tackles.  Ideally we would like to take the splitting to three feet. Looking at this splitting as a practical application can be seen in 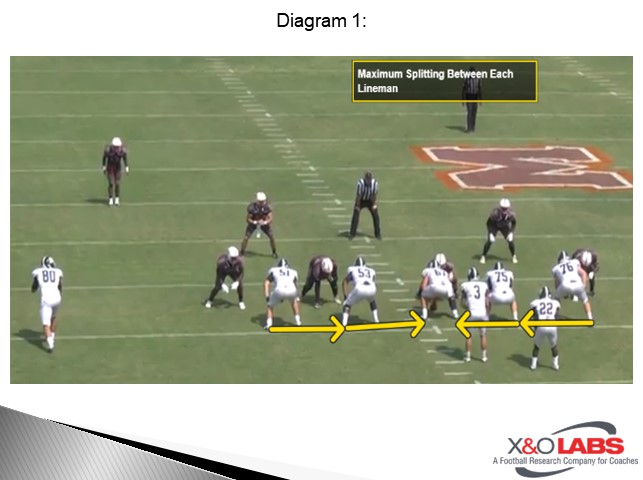